MessageToEagle.com – Late Zecharia Sitchin will always be remembered as a brilliant scholar, researcher and author who left an everlasting influence on the everyone dedicated to find the truth about the origins of human beings and contact with extraterrestrials in ancient times.

Zecharia Sitchin (1920-2010) was one of few scholars able to read and interpret ancient Sumerian and Akkadian clay tablets. He was also one of the greatest and most important ancient astronauts’ researchers who became well-known for his intriguing theories on the role the Anunnaki played in the origins of humanity.

Zecharia Sitchin passed away on October 9, 2010 and this article is written in his memory. This great and intelligent man will always be missed and even though he is no longer with us, he can never be forgotten due to the immense legacy he left behind. 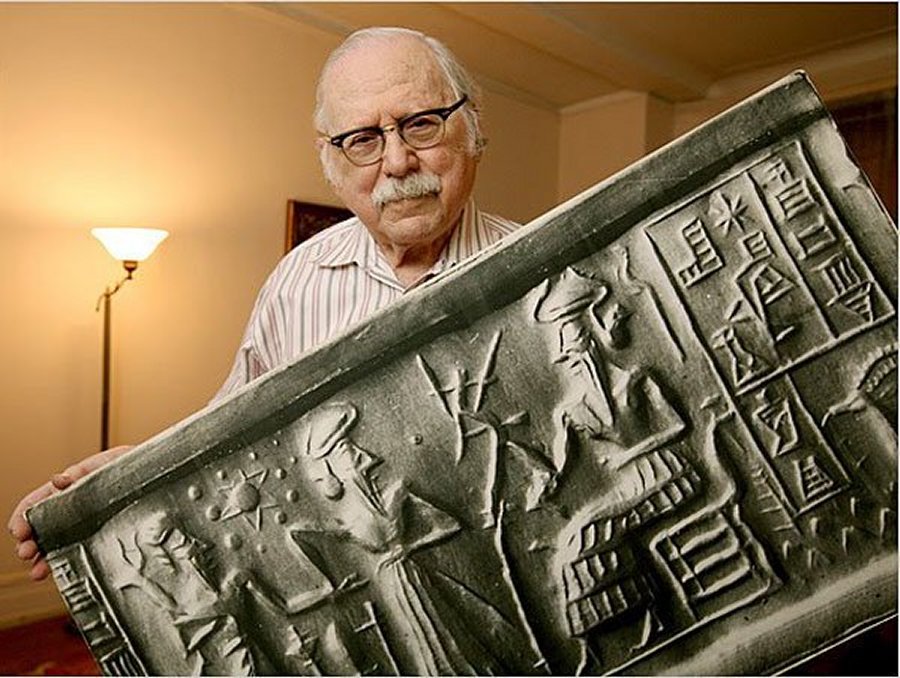 During his lifetime Sitchin wrote 16 books which focused on the Anunnaki, a group of deities in ancient Mesopotamian who were of extraterrestrial origin.

Those who are not familiar with Sichin’s remarkable work should read his Earth Chronicles that is a culmination of Sitchin’s 30 years of intensive research offering indisputable millennia-old proof of humanity’s extraterrestrial forefathers.
History tells us many interesting facts and stories about the Sumerians.The truth is that even today archaeologists and historians still do not have a complete picture that could tell everything about the people that once inhabited the region of the Tigris and Euphrates rivers.

In the 19th century archaeologists exploring the ancient ruins of Nineveh discovered 22,000 clay tablets. Translation of these tablets showed amazing stories, similar to those found in the Judeo-Christian Bible.

While interpreting and translating Sumerian clay tablets Zechario Sitchin was able to learn highly remarkable history of our planet. The information written down on the clay tablets exposed the secrets of our ancient origins.

According to Sitchin the clay tablets describe an alien race known as the Anunnaki who came to Earth to mine gold.

Anunnaki is a collective name for the gods of Heaven and Earth of which the “triad” of Gods belonged to. The most important Gods of the Mesopotamian pantheon were Anu, and his two sons Enlil and Enki. Other well-known Anunnaki gods were Ninki, Inanna, Utu, Ningishzida, Marduk, and of course many others

According to the Sumerian clay tablets, as interpreted by Sithin, the Anunnaki (“those who from heaven to earth came”) originated from a planet called Nibiru which means “the planet of the crossing” because together with its moons they form a cross image, and Nibiru is located at the crossing. Nibiru is supposed to circle the sun every 3,600 earth years. The Anunnaki arrived on Earth for the first time about 450,000 years ago.

The reason the Anunnaki came to Earth was to mine gold for their home planet Nibiru. The gold was needed to repair their planets atmosphere.

The creation of Earth (Enuma Elish) according to the Sumerian tablets states that the mining was a tiresome process and some of the gods mutinied against their labor.

“When the gods like men
Bore the work and suffered the toll
The toil of the gods was great,
The work was heavy, the distress was much.”

Anu, the chief Anunnaki allowed his son Enki (also called Ea) to create man with the help of his half-sister Ninki. Soon, the Anunnaki genetically engineered Homo sapiens as slave creatures to work their gold mines by crossing extraterrestrial genes with those of Homo erectus. Enki created humans on Earth in the image of the Anunnaki themsleves. The ancient secrets of mankind and the Anunnaki are revealed on the 14 tablets of Enki.

We mustn’t forget that the connection between humans and the Anunnaki is much more profound than that of masters and slaves.

The Anunnaki had very long life-spans compared to humans. They played a significant role in the development of our civilization and gave mankind knowledge in a variety of areas such as astronomy, agriculture, medicine, metallurgy, just to mention a few. This knowledge was given to humans by a highly advanced group of extraterrestrials, namely the Anunnaki.

During the Great Flood, the Anunnaki fled the Earth, but returned later and rebuilt civilizations. As Sitchin points out in his book The Twelve Planet, the Deluge was “no mere local event, it was a catastrophe affecting the whole of Earth , the whole of Mankind.

The Mesopotamian texts clearly state that the “four corners of the Earth” were affected. As such, it was a crucial point in the prehistory of Mesopotamia.

Sitchin’s extraordinary research reveals the truth about the Anunnaki.
There have also been a lot discussion whether the Anunnaki were reptilian-like humanoids. In our article ancient reptilian-like humanoids hold secrets of mankind’s origin we described these enigmatic figurines, dated to the so-called Ubaid period in Ur (6000 to 4000 BC) were unearthed by Sir Charles Leonard Woolley (17 April 1880 – 20 February 1960), a British archaeologist best known for his excavations in the 1920s and 1930s in Mesopotamia.

The figurines depict snake- or reptilian-headed humanoids that were found in several Ubaid cemeteries in the vicinity of Ur, southern Iraq.

Other interesting figures we came across depict odd-looking beings with large eyes.

The Sumerian tablets were written some 5-6000 years ago, by the end of the era of the Anunnaki’s 450,000 years reign, or more, on Earth. Much of the information the Sumerians relied on, beside what the gods told them face to face was the teachings that came out from Ea’s secret society, The Brotherhood of the Snake.

Readers interested in the history of the Anunnaki often wonder why these advanced extraterrestrials being abandoned humanity. In his book The Twelve Planet, Sitchin pointed out that he never said they left and there is no evidence that they did…

During his lifetime and afterward, Sichin has been attacked and ridiculed by debunkers. Still, the fact remains that Zecharia Sitchin’s work is dazzling, credible, provocative, exciting and highly important in finding our real past, and therefore our real future. There is no doubt he remains a prominent ancient astronauts researcher and the translation of his Sumerian clay tablets plays significant role in ancient human history.

If you are not yet familiar with Zecharia Sitchin wonderful and very interesting work, now it is the time to learn more about his legacy.

— ZECHARIA SITCHIN –Our teacher, our mentor.
You have opened before us the door of history,
reconnecting us to our ancient past.

You have given us a great foundation
in knowing what was.

We wish to thank you for your dedicated research
and commitment in educating us with this knowledge.

Just as Zecharia in Hebrew means “Remembered by God”,
we too will remember what you have taught us
and will share this knowledge with others.

You are truly a ray of light that has touched us all!

— With sincere admiration, Students of the Sitchin Certification Seminar —