MessageToEagle.com – Cahokia was one of the most sophisticated civilizations in North America. There are many questions without sufficient explanations regarding to Cahokia’s puzzling history.

It was a prehistoric metropolis inhabited by about 40,000 people living on six square miles. The Cahokians were an advanced civilization which built impressive solar observatories and more than 100 earthen mounds of various sizes, of which many were massive, square-bottomed and flat-topped pyramids.

The city’s name was Cahokia – “City of the Sun” and its inhabitants represented a Native American culture. This culture flourished in the Mississippi Valley, in what is today Illinois, about 700 A.D.
Even to this day mystery shrouds the entire place where once existed Cahokia. We know nothing about the Cahokians’ ethnicity and their language.

What was the true name of this advanced society known as the “Cahokians”? 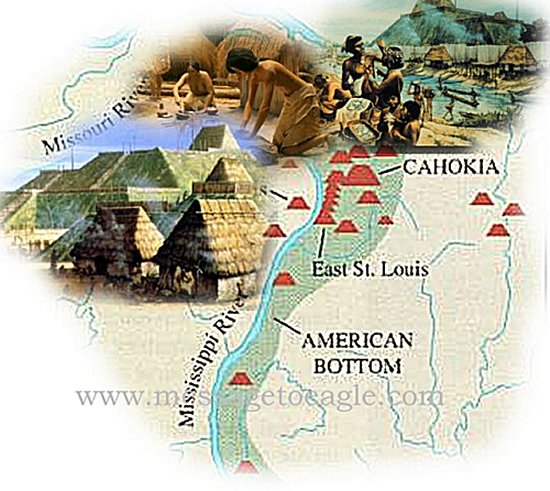 The name “Cahokia” is related to the name of a sub-tribe of the Illini Confederacy, a tribal group composed of twelve or thirteen allied tribes, inhabiting areas that are now part of four states, including the region where the town of St. Louis was founded in 1764. In fact, the city’s original name was never recorded.
The Cahokians had no form of writing. 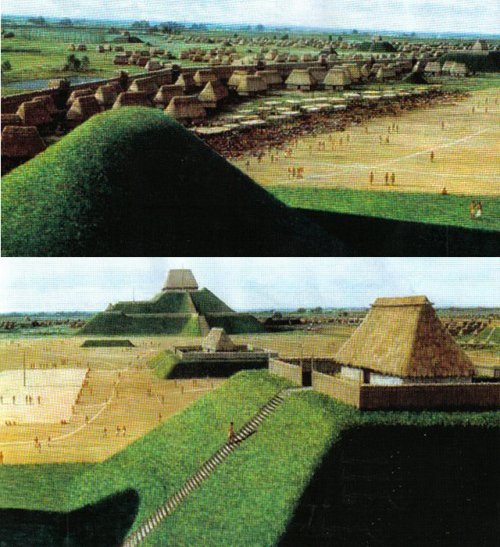 No one knows why Cahokia collapsed. Was it a political dispute or perhaps dramatic climate change? For unknown reasons, inhabitants of Cahokia abandoned their houses, around 1200 AD.
One hundred years later, when Columbus with his fleet arrived in America, there was no trace after the Cahokia’s advanced civilization except for massive ruins.

The Cahokians built three different types of mounds; first of them were — pyramid-shaped platform mounds, with flat tops for ceremonial buildings or residences of the elite; conical mounds used for burials of important people, and ridge-top mounds serving as landmarks. 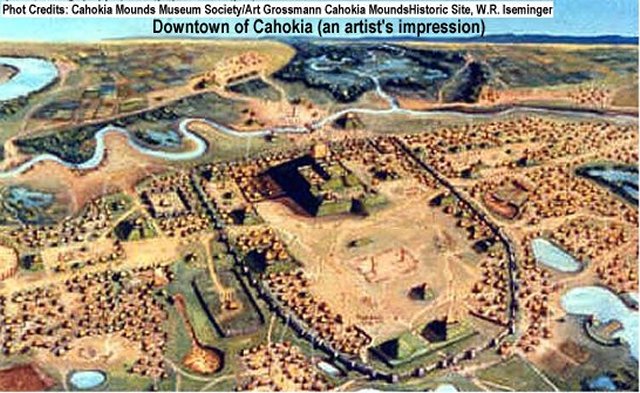 The most famous of all mounds is the 100-foot Monks Mound with its 14-acre base, located on the north side of the Grand Plaza. Monks Mound is the largest mound in North America!

At the top of Monks Mound was standing a large wooden building – 105-feet long, 48 feet wide and about 50 feet high. Probably this building served as the temple and place of residence of Cahokia’s ruler.
Who were the mysterious builders of Cahokia’s mounds? How could such a great civilization just vanish without a trace?

Early European researchers who discovered Cahokia also unearthed impressive artifacts such as stone pipes and tools made from copper and mica and many other burial artifacts. 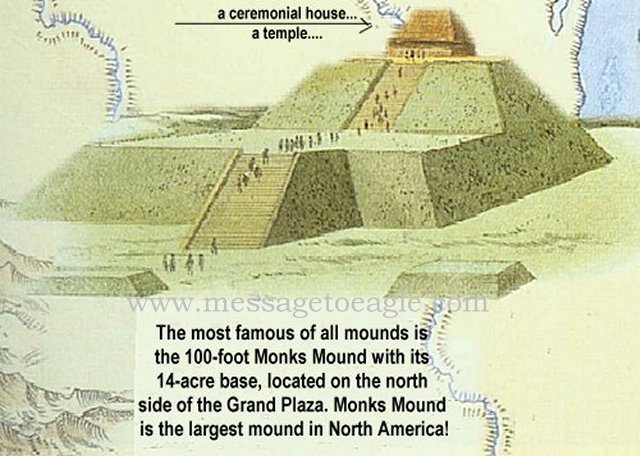 The researchers also found evidence that this mysterious culture possessed knowledge of advanced engineering and city planning within the huge complex of cities and suburbs of Cahokia.

Buhl Woman Of Idaho: One Of The Oldest Skeletons In North America

Etowah Indian Mounds: A Legacy Of The Ancient Mississippian Culture

Bighorn Medicine Wheel: Sacred Site And Ancient Solar Observatory
In 1966 and 1967 and even through the early 1970’s, UW-Milwaukee researchers conducted very important excavations at the site.

Numerous pottery fragments and other artifacts were found scattered on the floor of one of the houses. It seems they have been left where they were last used.
Researchers discovered a defensive wall around the mound complex and approximately 200 meters east of the mound, there was an impressive fortification. 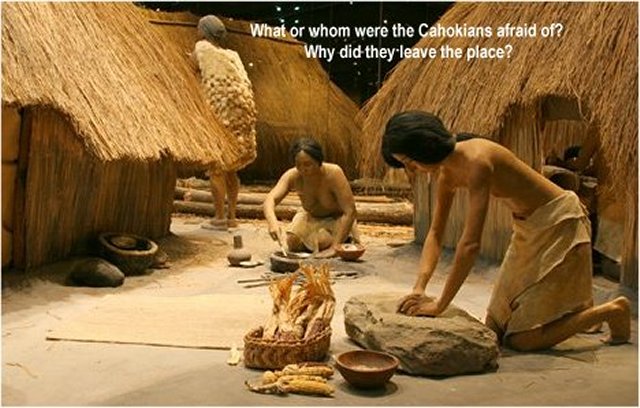 “…three things lead most archaeologists to believe that it was primarily a defensive structure: the great height of the wall; the presence of evenly spaced bastions, projections from which archers could shoot arrows; and evidence that portions of the wall were hurriedly built, cutting through residential areas, as if danger was imminent.” (Cahokia Mounds State Historic Site)
“…In one instance, a square bastion of the second palisade line cut through a burned domestic structure… the house was abandoned quickly and burned down to make way for palisade construction, perhaps in a hasty attempt to complete the palisade to stave off outside attack…” (© 2001 UW-Milwaukee Archaeological Laboratory)

Archeologists recovered more than 250 skeletons from Cahokia’s Mound 72. Scholars believe almost 62 percent of these were sacrificial victims, based on signs of ritual execution, method of burial, and other factors.The skeletons include:of four young men were found without hands and skulls.

In another mass grave there were more than 50 women around 21 years old, with the bodies arranged in two layers separated by matting and yet another mass burial contained 40 men and women who appear to have been violently killed. The suggestion has been made that some of these were buried alive: ‘From the vertical position of some of the fingers, which appear to have been digging in the sand, it is apparent that not all of the victims were dead when they were interred – that some had been trying to pull themselves out of the mass of bodies..'(Young & Fowler).

The downfall of Cahokia is unclear.
Copyright © MessageToEagle.com All rights reserved. This material may not be published, broadcast, rewritten or redistributed in whole or part without the express written permission of MessageToEagle.com