Cynthia McKanzie  – MessageToEagle.com – Phobos is a small, irregularly shaped object that orbits Mars three times a day. The Martian moon is doomed because in several tens of millions of years it will either crash onto the surface of Mars or break up into a ring.

By studying Phobos’s orbit astronomers can gain important information on the inner workings of Mars.  But sometimes, researchers come across a surprise that cannot be easily explained.

Being only a few thousand miles above the Red Planet’s surface, Phobos is heavily cratered and appears to have grooves and streaks of material along its sides.

Scientists have recently discovered something strange happens on Mars during a solar eclipse and Phobos may hold the clues to the mystery. 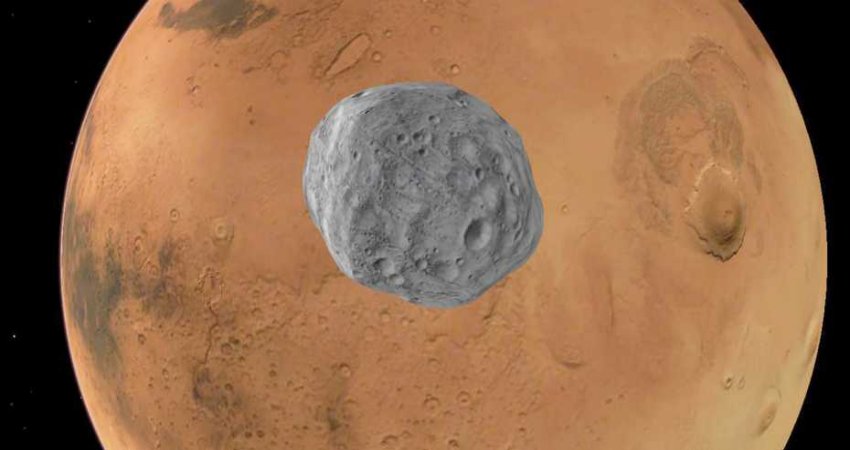 NASA’s InSight mission provides data from the surface of Mars. Its seismometer, equipped with electronics built at ETH Zurich, not only records marsquakes, but unexpectedly reacts to solar eclipses as well. When the Martian moon, Phobos moves directly in front of the sun, the instrument tips slightly to one side.

An observer standing on Mars would see the planet’s moon Phobos cross the sky from west to east every five hours. Its orbit passes between the sun and any given point on Mars about once each Earth year. Each time it does so, it causes from one to seven solar eclipses within the space of three days.

One place where this happens is the site of NASA’s InSight lander, stationed in the Elysium Planitia region since November 2018. In other words, the phenomenon occurs much more frequently than on Earth, when our moon crosses in front of the sun.

“However, the eclipses on Mars are shorter – they last just 30 seconds and are never total eclipses,” explains Simon Stähler, a seismologist at ETH Zurich’s Institute of Geophysics in a press statement.

InSight’s seismometer, SEIS, the Seismic Experiment for Interior Structure, is a round, dome-shaped instrument that sits on the Martian surface and takes the “pulse” or seismic vibrations of Mars.

Its measurements provide a glimpse into the planet’s internal activity. The seismometer waits patiently to sense the pulse, or seismic waves, from marsquakes, and thumps of meteorite impacts.

Here comes the interesting part of the story. While examining data from the latest solar eclipse on the Red Planet scientists discovered something unusual.

InSight’s weather instruments indicated no atmospheric changes, and the winds did not change as expected. Other instruments; however, delivered a surprise: both the seismometer and the magnetometer registered an effect.

The signal from the magnetometer is most likely due to the decline in the solar cells’ electricity, as Anna Mittelholz, a recent addition to ETH Zurich’s Mars team, was able to show.

“But we didn’t expect this seismometer reading; it’s an unusual signal,” Stähler says. Normally, the instrument – equipped with electronics built at ETH – would indicate quakes on the planet.

So far the Marsquake Service, led by John Clinton and Domenico Giardini at ETH, has recorded about 40 conventional quakes, the strongest of which registered a magnitude of 3.8, as well as several hundred regional, shallow quakes.

What was surprising during the solar eclipse was that the seismometer tilted slightly in a particular direction.

“This tilt is incredibly small,” Stähler notes. “Imagine a 5-​franc coin; now, push two silver atoms under one edge. That’s the incline we’re talking about: 10-8.” As slight as this effect was, it was still unmistakable.

“The most obvious explanation would be Phobos’s gravity, similar to how Earth’s moon causes the tides,” Stähler says, “but we quickly ruled this out.” If that were the explanation, then the seismometer signal would be present for a longer period of time and every five hours when Phobos makes its pass, not only during eclipses. 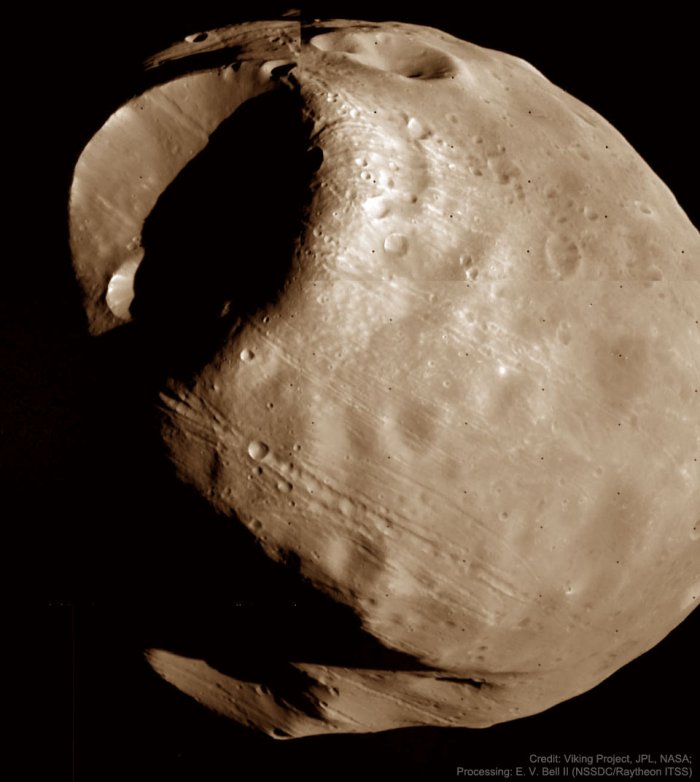 Researchers determined the most likely cause of the tilt: “During an eclipse, the ground cools. It deforms unevenly, which tilts the instrument,” says Martin van Driel from the Seismology and Wave Physics research group.

As it happens, an infrared sensor did indeed measure a cooling of the ground on Mars of two degrees. Calculations revealed that in the 30 seconds of the eclipse, the “cold front” could penetrate the ground only to a depth of micro-​ or millimeters, but the effect was enough to tug at the seismometer.

An observation back on Earth supports Stähler’s theory. At the Black Forest Observatory, located in an abandoned silver mine in Germany, Rudolf Widmer-​Schnidrig discovered a similar phenomenon: during a seismometer test, someone neglected to turn out the light. The heat given off by a 60-​watt bulb was apparently enough to warm the topmost layer of granite deep below ground so that it expanded slightly and caused the seismometer to tilt slightly to one side.

Scientists should be able to use the tiny tilt signal from Mars to map Phobos’ orbit with more precision than was previously possible. InSight’s position is the most accurately measured location on Mars; if the scientists know exactly when a transit by Phobos here begins and ends, they can calculate its orbit precisely. This is important for future space missions.