Ellen Lloyd – MessageToEagle.com – The mystery of the “Gurning Man” of Glasgow who vanished into thin air has never been solved. Was he a madman, an illusion, a visitor from another time or perhaps a parallel universe? Whoever he was he certainly did struck fear into everyone who had the misfortune of encountering him.

The first sightings of the “Gurning Man” took place in the late 1970s. Most of the encounters with this odd being took place in Glasgow, Scotland around the district of Crosshill usually between 4.00-9.00 P.M. Suddenly women started to report seeing a figure shaped like a human, but behaving as if he was insane. 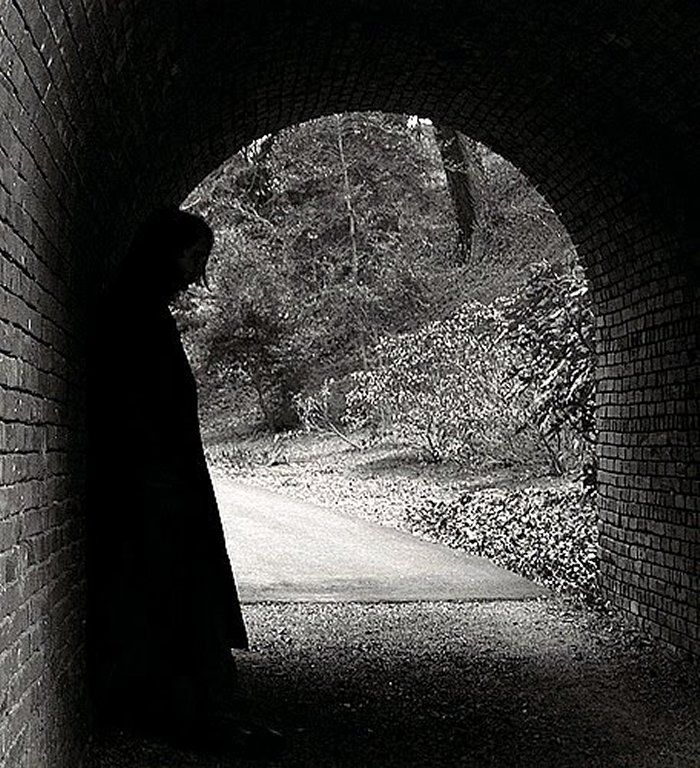 The sighting took place for three years and many of the women were so traumatized that they left the area moving to an entirely different place as far away as possible. One woman in her fifties who lived with her husband and children woke up in the middle of the night.

The sighting could have been easily dismissed as a nightmare, but it was just one of many reports coming from women who had no knowledge of each other. Just some days before the woman observed the “Gurning Man”, two teenage girls had an equally horrifying encounter with chilling similarities, which they alleged took place less than 100 meters from the other witness’ home.

While walking home from a party, they noticed they noticed a strange man, who they described as being aged in his late 50s, bald, extremely thin and dressed in a “tight black leotard”. He was stood beneath a street light and appeared to be nervously moving on the spot with agitated actions.

As the two girls approached the man, their sense of fear grew and they stopped talking, so as to concentrate on moving past the odd figure as quickly as possible. As they passed, they could see from their peripheral vision that the man was pulling a bizarre, contorted expression, halfway between a smile and a pained grimace. The girls became nervous and frightened and started walking faster to get away from the man.

One of them looked back to see if the odd man was following them, but was astonished to see that he had vanished from sight entirely. It was, as if he had vanished into thin air.

On A Mission? Mystery Of The Black-Eyed People – Why Are They So Different From The Rest Of Us?

Then there were more reports. In total, there were 17 reports of the Gurning Man made in the Crosshill area of Glasgow between 1976 and 1979. Eleven of the sightings were made on the street, whilst the six other sightings were reported to have occurred inside someone’s home.

All witnesses reported seeing a man in his fifties. He was bald, very thin and dressed in black. His movements were jittery, as though he were incredibly agitated. He was able to vanish into thin air within seconds.

The mystery of the “Gurning Man” of Glasgow has never been solved. Who was he? Was he just a work of imagination or was he real person? Was he mentally ill or maybe homeless?

Some think he might have been a time traveler or perhaps a visitor from a parallel universe who accidentally entered our visible world. Whoever he was, he is still remembered and his name evokes terror in Glasgow.

On This Day In History: Bolsheviks Executed Aleksandr Kolchak, A Navy Officer And Explorer Of The Arctic – On Feb 7, 1920