MessageToEagle.com – White Temple was located in the sacred precinct of the god Anu in the ancient Sumerian city of Uruk (now, Warka), Iraq, which was home of the legendary Gilgamesh.

This area had the name ‘Kullaba’ prior to merging with the Eanna District. The sacred precinct of Kullaba dates to the Eridu period, when it was one of the most important cities of Sumer.

Lugal-Anne-Mundu: ‘King Of The Universe’ And Powerful Leader Who Restored Sumer To Its Former Glory

Uruk: The First City Built By King Gilgamesh 4,500 Years Ago

Walls Of Uruk Built By Sumerian King Gilgamesh 4,500 Years Ago

The White Temple – named in modern times for its pale mud-brick walls – stood on the so-called “Anu Ziggurat” (the oldest surviving ziggurat). The terrace was extended and raised over time at least ten times until it reached a height of about 12 m.

The beautiful shrine had its outer walls, covered with a thin, white, plaster facade, almost luminous in bright sunlight.

The exterior walls were decorated with niches and other decorations creating 3D effect. The erection of the building was radiocarbon-dated between 3517 and 3358 BC. 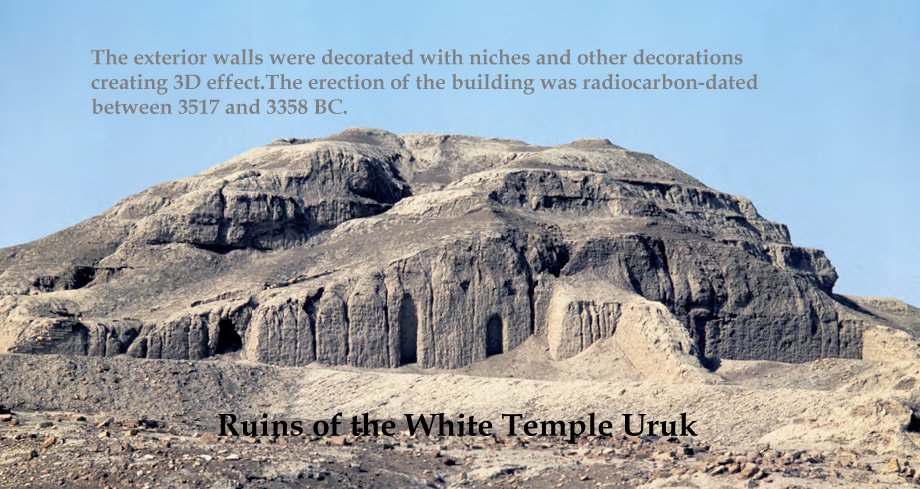 The so-called elite buildings of Uruk were organized in two separate architectural groups the Eanna and Kullaba at a distance of about 300-400m from each other.

They represented Uruk’s two main temple areas – one dedicated the worship of the god Anu (the White Temple) and the other (the Eanna Precinct) to Inanna, the goddess of fertility, love and war.

The White Temple was built on a trapezoidal terrace called the ziggurat with dimensions 50 x 46 x 10 meters and a height of 13 meters; the temple was accessed by means of a narrow staircase carved into the final terrace. The building had three entrances. One of the entrances was located in the long, southern wall of the temple.

Two others were opposite each other in the shorter walls and led directly to the nave with a statue of deity, a stepped sacrificial altar, which was surrounded on both sides by small rooms. In the central room, excavators found a lot of bones and the remains that suggested some rituals were held there; some artifacts discovered in the temple included 19 tablets of gypsum with cylinder seal impressions.

The whole structure definitely dominated the landscape of the city Uruk and its surrounding region as well. It towered even over the massive defensive walls of Uruk, which according to tradition was built on the orders of King Gilgamesh.

However, the temple itself, had a size of 17.5 to 22.3 meters and it was not big enough to accommodate larger groups of worshippers.

Most probably, only priests and the leading members of the community were allowed to enter the temple.

MessageToEagle.com via AncientPages.com. All rights reserved. This material may not be published, broadcast, rewritten or redistributed in whole or part without the express written permission of AncientPages.com

(Published with permission of AncientPages.com)