MessageToEagle.com – There is no doubt anymore – they are out there and they are huge!

For the first time ever, astronomers can confirm the existence of orbiting supermassive black holes. Having the mass of several billion the mass of our Sun, both of these black holes are giant cosmic monsters.

At roughly 750 million light years from Earth, the galaxy named 0402+379 and the supermassive black holes within it, are incredibly far away, but are also at the perfect distance from Earth and each other to be observed.

What Are Supermassive Black Holes?

Supermassive black holes are the most destructive force in the Universe, with a compact energy source of enormous strength and a mass of an order of magnitude between 105 and 1010 (hundreds of thousands and tens of billions) of solar masses! 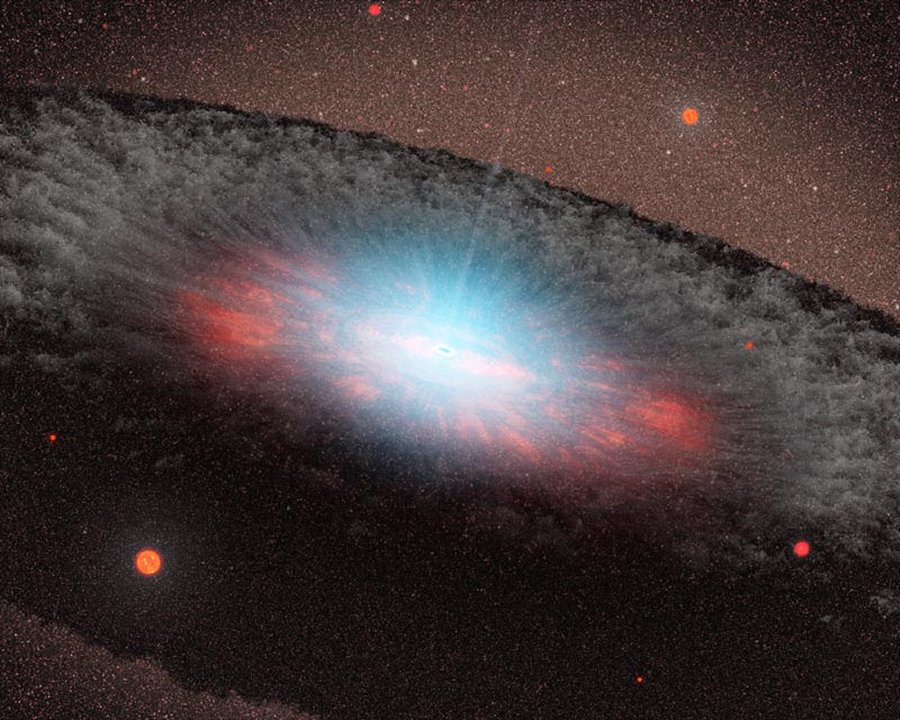 Artist’s concept depicts a supermassive black hole at the center of a galaxy. Credits: NASA

A black hole is a special region of space from which no matter or radiation can escape. A black hole is a result of the extreme curvature of space by a massive compact body. However, black holes can never be observed directly and their existence can only be inferred from the gravitational effects and the radiation emitted by material falling into them.

The supermassive black holes are so bizarre that until recently scientists did not believe they existed. Today, we know they do exist.

“For a long time, we’ve been looking into space to try and find a pair of these supermassive black holes orbiting as a result of two galaxies merging,” Professor Professor Greg Taylor at the University of New Mexico said.

“Even though we’ve theorized that this should be happening, nobody had ever seen it until now.” 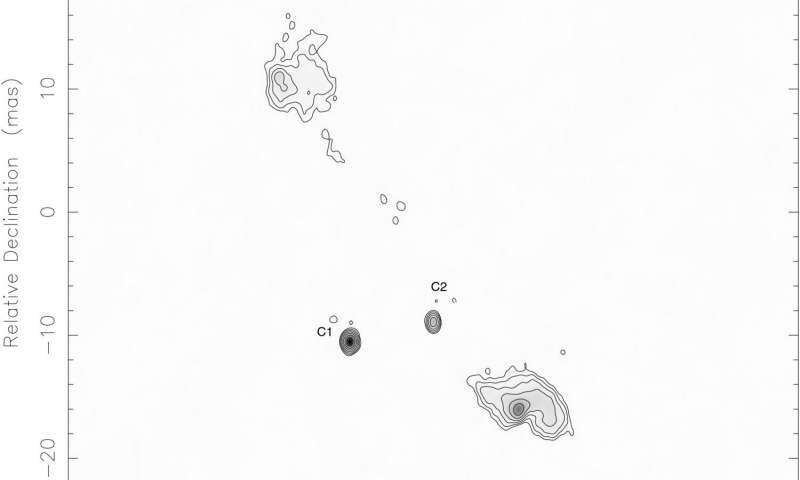 VLBA map of radio galaxy 0402+379 at 15 GHz. It hosts two supermassive black holes at its center, being denoted as C1 and C2. Credit: UNM

In early 2016, an international team of researchers detected the existence of gravitational waves, confirming Albert Einstein’s 100-year-old prediction and astonishing the scientific community. These gravitational waves were the result two stellar mass black holes (~30 solar mass) colliding in space within the Hubble time. 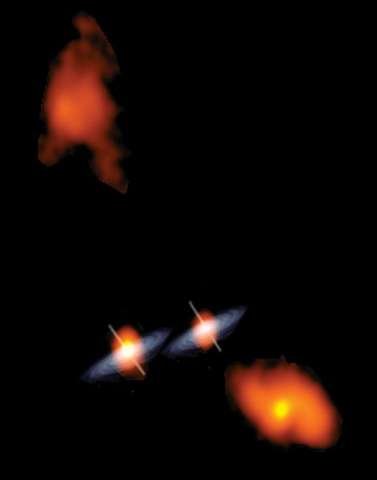 A false color VLBA map of radio galaxy 0402+379 at 15 GHz. It hosts two supermassive black holes at its center, being represented
by accretion discs with twin jets. Credit: UNM

Now, thanks to this latest research, scientists will be able to start to understand what leads up to the merger of supermassive black holes that creates ripples in the fabric of space-time and begin to learn more about the evolution of galaxies and the role these black holes play in it.

‘Zone of Avoidance’ And Vela Supercluster, One Of The Most Gigantic Objects Revealed Behind The Milky Way

Using the Very Long Baseline Array (VLBA), a system made up of 10 radio telescopes across the U.S. and operated in Socorro, N.M., researchers have been able to observe several frequencies of radio signals emitted by these supermassive black holes (SMBH). Over time, astronomers have essentially been able to plot their trajectory and confirm them as a visual binary system. In other words, they’ve observed these black holes in orbit with one another.

These black holes are called supermassive for a good reason. Combined they have a mass that is 15 billion times that of our sun, or 15 billion solar masses.

The unbelievable size of these black holes means their orbital period is around 24,000 years, so while the team has been observing them for over a decade, they’ve yet to see even the slightest curvature in their orbit.

Continuing to observe the orbit and interaction of these two supermassive black holes could also help us gain a better understanding of what the future of our own galaxy might look like.

Right now, the Andromeda galaxy is on collision course with our Milky Way, meaning the event astronomers are currently observing, might occur in our galaxy in a few billion years. 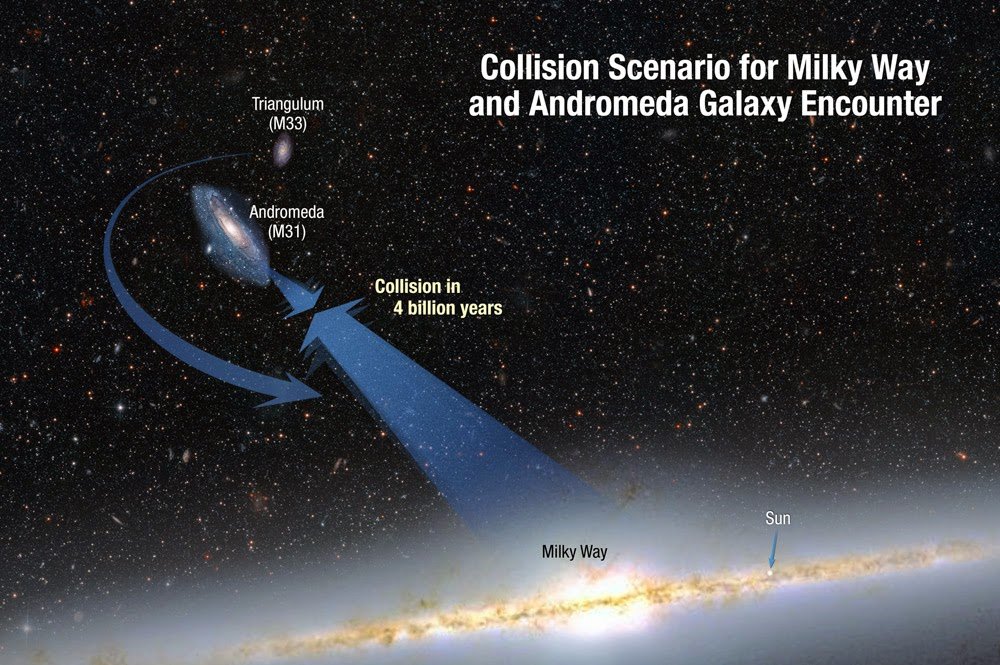 This illustration shows the inevitable collision between our Milky Way galaxy and the Andromeda galaxy approximately 4 billion years from now. The galaxies are moving toward each other under the inexorable pull of gravity between them. A smaller galaxy, Triangulum, may be part of the smashup. Credit: NASA, ESA, and A. Feild and R. van der Marel (STScI) – Learn more about the collision of Milky Way and Andromeda Galaxy.

“Supermassive black holes have a lot of influence on the stars around them and the growth and evolution of the galaxy,” Professor Taylor explained. “So, understanding more about them and what happens when they merge with one another could be important for our understanding for the universe.”