Jan Bartek – MessageToEagle.com – On the left side of the grave, the male skeleton lays with one arm outstretched, holding the abdomen of the female skeleton by its side. The woman’s face is pressed into his shoulder, left hand resting across his waist; on her fourth finger is a simple silver ring.

The postures of the skeletons, which were discovered last summer during construction in the city of Datong in China’s Shaanxi Province, suggests that the man and woman were buried together and positioned in this way as a display of the love they shared. The remains of the couple, dated to the North Wei period (386 to 534 C.E.), is believed to be the first discovery of its kind in China. 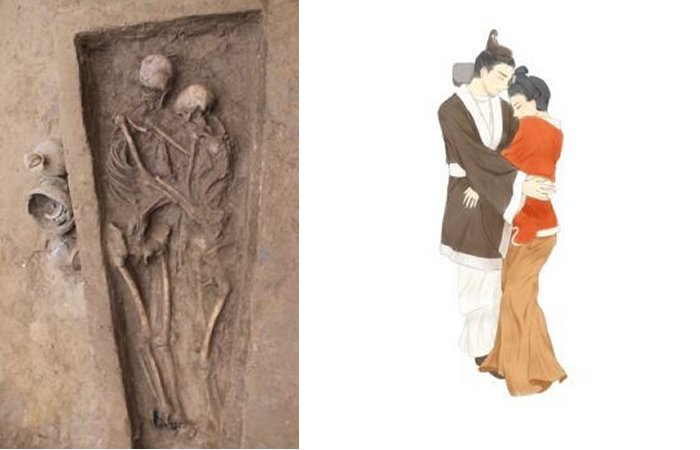 According to Qian Wang, a paleoanthropologist and professor at Texas A&M University’s College of Dentistry, the joint burial in itself isn’t unique. The cemetery of more than 600 tombs, excavated in June 2020 by the Shaanxi Provincial Institute of Archaeology, contains at least two other joint burials. But the two nearly complete skeletons locked in embrace are a “remarkable discovery” for the rare glimpse it gives into cultural attitudes in China during this time period, he said.

“It reflects humankind’s thoughts toward death and the brave pursuit of love, and belief in the afterlife,” Wang said.

The discovery of the skeletons, and Wang’s assessment of its significance, is detailed in the International Journal of Osteoarchaeology. Wang’s research focuses on craniofacial skeletons, and his research team recently discovered the earliest confirmed case of intentional cranial modification from more than 12,000 years ago in northern China. When researchers unearthed the skeletons at the Datong cemetery, Wang was contacted by a frequent collaborator to give his assessment.

When he received the photos, “it was very shocking to see,” Wang said. “That’s why I realized the importance of this. You can find side-by-side burials, or two different coffins in a burial chamber, but this is a loving embrace, which means they were put there (shortly after death). This is not only a broader expression of love, but it also shows community support.”

While researchers can’t say for certain who the couple may have been or how they died, Wang said their remains, which were “exceptionally well-preserved,” provide some clues.

The man, believed to be around 30 years old, suffered from an unhealed fracture on the ulna of the right arm. Part of the fourth finger of his right hand is also missing, suggesting he might have lived “a very energetic life—perhaps a warrior, or something like this,” Wang said. The woman is about 35 years old, he said, and appears to have had an issue with one of her wisdom teeth.

“They look pretty much like commoners,” Wang said, but beyond that, little else can be gleaned about the lives they may have led.

The presence of the plain silver band on the woman’s ring finger does lead Wang to believe the individuals were likely husband and wife. Based on the appearance of the skeletons, several scenarios are possible.

“The woman was healthier than the man. So maybe the man died of infection of something, and the woman decided to commit suicide to be buried with him,” Wang said.

Other possibilities cannot be ruled out, but the paper’s authors agree it is most likely that the woman sacrificed herself to be buried alongside her husband, writing that “union might be happiness and death might be sadness, yet this burial of love embodies them all.”

Wang said this would be consistent with the values of the time.

During the North Wei Dynasty, about 500 years after Confucianism, romance between men and women was praised. Wang says attitudes toward “free love” were somewhat liberal, and many celebrated love stories had tragic endings similar to “Romeo and Juliet.” He describes the folk story of the “Butterfly Lovers,” in which a woman jumps into the tomb of her deceased lover. Their spirits emerge from his grave as butterflies, never to be separated again.

It would then make sense that the couple’s families would position their bodies in such a way to show their bond in life, with the woman’s visible wedding ring serving as a symbol of their love. Wang notes that while the male skeleton’s ring finger is missing on the visible right hand, it’s possible the hand positioned under the female skeleton could also bear a wedding band. Both skeletons remained buried for future exhibition in a museum, and have not been fully exposed.

Wang said this time period also saw a growing belief in the afterlife as Buddhism entered China under North Wei rulers. The move of several small ethnic groups into northern China was the source of much social, cultural and political change during the period, he said.

“Along with other new ideas and thoughts, the openness and boldness of the expression of love” in the case of the embracing skeletons is a clear influence from Western regions, the study’s authors write.

Similar archaeological discoveries have been made elsewhere in Europe, such as Italy’s “Lovers of Valdaro.” But this manifestation of love in skeletal form discovered in China is unique in that it has been given scientific description, using Wang’s assessment.

“With our discovery, the paper is a scientific description of the embrace, which means it has been entered into the scientific literature,” Wang said. “It’s not just the burial itself—it somehow reflects our whole believing of thoughts toward death, love, family support, ring culture, and our view of life.”