Conny Waters – MessageToEagle.com –  A Professor has announced he has deciphered a 3,500-year-old stone tablet discovered in Jerusalem. According to his study, the stone is inscribed with a curse against the city’s governor.

According to Professor Gershon Galil, head of the Institute for Biblical Studies and Ancient History at the University, who examined the stone in detail, the artifact was used in a voodoo ceremony. The ritual participants were most likely priests or other important figures in the city who were feuding with the city’s highest-level official, a statement released by the institute stated. 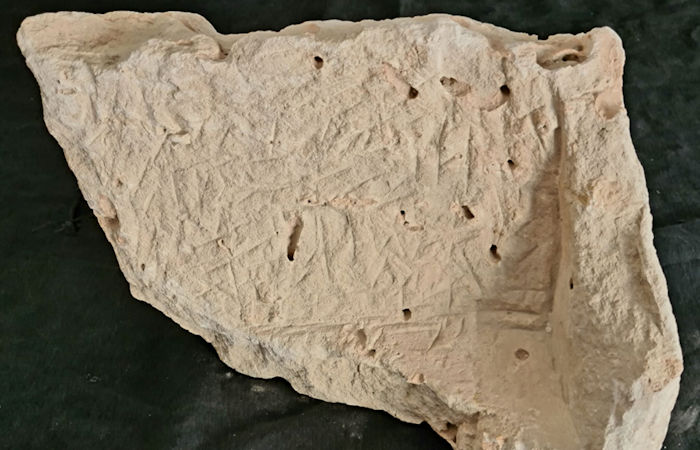 A 3,500-year-old stone tablet discovered in the City of David, Jerusalem in 2010. (Courtesy of Institute for Biblical Studies and Ancient History

The cursed stone was discovered in 2010 by archaeologist Eli Shukron in an ancient compound called the Pillar Temple in the City of David, near the Gihon Spring. While the excavations were conducted under Shukron while he was working with the Israel Antiquities Authority, the current research was conducted independently of the IAA.

“The inscription contains 20 words and 63 letters in the Proto-Canaanite script, an early Semitic alphabet, and a predecessor to modern alphabets used in the region.

In a departure from academic norms, the inscription is being published in mass media prior to its appearance in a peer-reviewed journal. “It will be submitted to a peer-reviewed journal soon and will be published within a few months,” Galil told The Times of Israel. He added that the article has been accepted into “an important scientific journal,” but in the meantime, his conclusions and images are being released to the public.

The stone tablet is inscribed with the repeated phrase, “cursed, cursed, you will surely die,” and singles out the “governor of the city,” according to Galil’s translation,” the Times of Israel reports.

Professor Galil states the translation also “proves that Jerusalem was not only a fortified city but also a very important cultural and cultic center,” and concluded that the dating of the artifact meant it influenced other writers and priests in the region later on.”

Scientists are cautious though and the  Israel Antiquities Authority has not yet inspected the artifact which explains why they do wish to not respond to Galil’s hypotheses.

“The Israel Antiquities Authority believes that the conclusions should be based on scientific research and publication, as is customary in academia,” the IAA statement cautioned.

“The University of Haifa reasoned that the findings fit with existing material from the time period, noting that ancient Egyptian curses have been found carved onto pottery or figurines from the Bronze Age. It also points to multiple sources which indicate conflicts between city residents and governors, both in the Bible and in Neo-Assyrian records,” the Times of Israel reports.

If Professor Galil’s finding is confirmed, it is among the earliest inscriptions discovered to date in Jerusalem.