We often call them ‘snowballs’. These cosmic snowballs of frozen gases, rock and dust are approximately the size of a small town. The gases and dust form an gigantic tail that stretches away from the sun for millions of kilometers. They can be short period comets (with orbital periods up to 200 years) and long-period comets with orbital period of over 200 years. 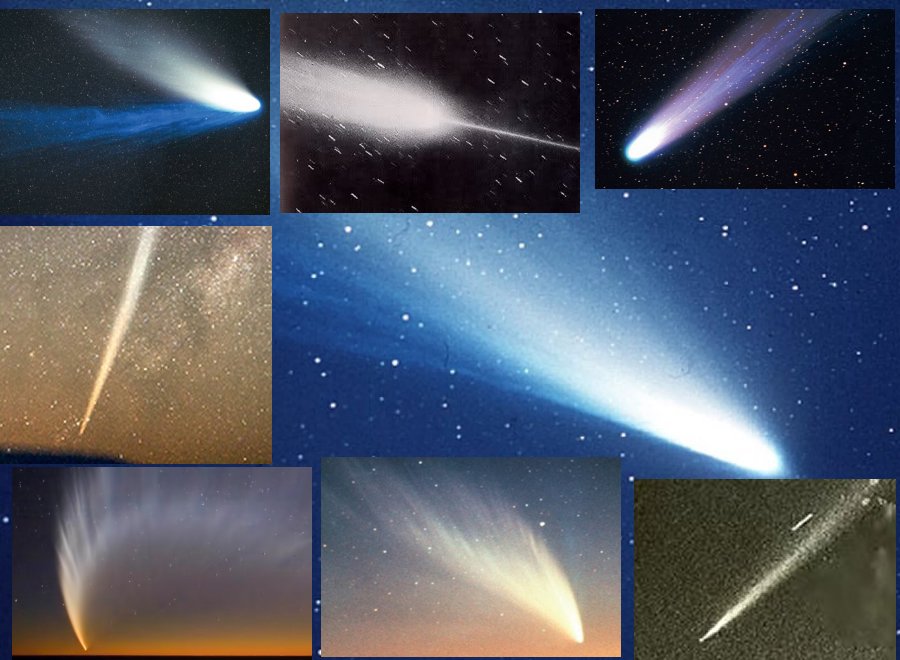 Comets – especially the bright ones – have always fascinated people. Comets are cosmic snowballs of frozen gases, rock and dust approximately the size of a small town.

When a comet’s orbit brings it close to the sun, it heats up and spews dust and gases into a giant glowing head larger than most planets. The dust and gases form a tail that stretches away from the sun for millions of kilometers. Unlike ordinary stars, these fantastic fiery-looking objects appear and disappear unpredictably.

Bright comets observed in the sky have been recorded since the fourth century BC. People feared them as omens of famines, wars and other terrible disasters. Today we know that a comet is an icy member of our solar system. Comets travel in elliptical orbits around the Sun and follow the basic laws of physics.

It’s probably the most recognizable passing object in the sky. This short-period comet is one of the most famous short-term comets (it completes its orbit in less than 200 years). Halley’s most famous appearance occurred shortly before the 1066 invasion of England by William the Conquerer. It is said that William felt the comet heralded his success. In any case, the comet was depicted on the Bayeux Tapestry, a beautiful Romanesque art, which chronicles the invasion – in William’s honor.

It is one of the most spectacular naked eye comets in history and one of the most observable comets for several decades. It was discovered in 1995 by amateur astronomers Alan Hale in New Mexico and Thomas Bopp in Arizona. It was  visible to the naked eye for a record 18 months, twice as long as the previous record holder, the Great Comet of 1811. This long-period comet will be visible with large telescopes until around 2020. It remains the largest comet ever observed.

The advent of Hale Bopp led to a bizarre and tragic human event – 39 members of the Heaven’s Gate cult in San Diego, US, marked the arrival by committing suicide.

Comet Lovejoy was one of the brightest and most active comets since comet Hale-Bopp in 1997.
Lovejoy passed closest to the sun on January 30, 2015, when it was releasing water at the rate
of 20 tons per second.
The team observed the atmosphere of the comet around this time when it was brightest and most active.
This long-period comet released large amounts of alcohol (the same type is used in alcoholic beverages) as well as a type of sugar into space, according to new observations by an international team.
The finding strongly suggests that comets could have been a source of the complex organic molecules necessary for the emergence of life.

The Hubble Space Telescope studied the nucleus of this long-period comet in great detail. This is not Comet Hyakutake’s first visit to the inner Solar System.

Astronomers have calculated its orbit and believe it was here about 8,000 years ago. Its orbit will not bring it near the Sun again for about 14,000 years.

The spacecraft Ulysses accidentally passed through Hyakutake’s tail in May 1996, and recorded it as at least 570 million km (350 million miles) long, which means twice as long as that of any other known comet.

When this long-period comet passed through the inner solar system in 1976, it was one of the brightest objects in the night sky.

It is often described as a “great comet”.

Based on reports of observers, it approached perihelion and was clearly visible in the daytime sky next to the Sun. In Japan, it was seen shining at magnitude -10 (one of the brightest comets seen in the last thousand years) and is sometimes known as the Great Comet of 1965.

Suddenly it broke into three pieces just before its perihelion passage. The three pieces continued in almost identical orbits, and the comet re-appeared in the morning sky in late October, showing a very bright tail. By early 1966, it had faded from view as it receded into the outer solar system.

Ikeya–Seki, which is a long-period comet, is a member of the Kreutz sungrazers, which are believed to be fragments of one large comet that broke up several centuries ago, in 1106.

It was traveling on a hyperbolic orbit, meaning it is traveling fast enough to escape from the Solar System entirely, therefore it will never be seen again by earthbound observers. Arend-Roland comet was a non-periodic comet that only passed through the Solar System once.

It was the brightest comet in over 40 years, and was easily visible to the naked eye for observers in the Southern Hemisphere in January and February 2007.

McNaught, which is a non-periodic comet, is considered one of the most beautiful naked eye comets in recorded history. NASA observed the comet using SOHO (Solar and Heliospheric Observatory).

Strangely, Ulysses also passed through its tail, just as it did in 1996 with Hyakutake comet.

Ridpath I, A Dictionary of Astronomy