Eddie Gonzales Jr. – MessageToEagle.com – From our perspective, it’s difficult to fathom life could exist on a small, rocky planet like Mercury that has a thin atmosphere. Mercury’s surface temperature reaches a scorching 430 degrees Celsius during the daytime, and in the absence of an atmosphere, it plummets to -180 degrees Celsius at night.

We may think these are certainly not ideal conditions for alien life, but a new study shows some subsurface regions of Mercury have shown the capacity for hosting life. 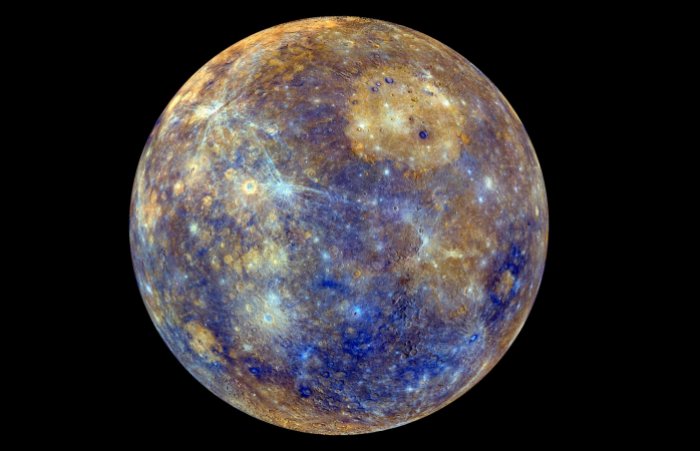 A team led by Planetary Science Institute Research Scientist Alexis Rodriguez who is behind this study says it’s possible some parts of Mercury’s subsurface, and those of similar planets in the galaxy, once could have been capable of fostering prebiotic chemistry, and perhaps even simple life forms.

Chaotic terrains on Mercury opposite the large Caloris impact basin are landscapes produced by the removal of vast volumes of upper crustal volatiles, the paper says.

“The findings mean that Mercury had a thick volatile-rich—possibly but not necessarily water-rich—crust in this location,” said Rodriguez.

“The deep valleys and enormous mountains that now characterize the chaotic terrains were once part of volatile-rich geologic deposits a few kilometers deep, and do not consist of ancient cratered surfaces that were seismically disturbed due to the formation of Mercury’s Caloris impact basin on the opposite side of the planet, as some scientists had speculated,” said coauthor Berman. “A key to the discovery was the finding that the development of the chaotic terrains persisted until approximately 1.8 billion years ago, 2 billion years after the Caloris basin formed.”

“We identified multi-kilometer surface elevation losses within the chaotic terrains located at the Caloris basin’s antipode. This finding indicates that enormous volumes of crustal volatiles turned into gas and escaped the planet’s upper crust over a surface area slightly larger than that of California, approximately 500,000 square kilometers,” said coauthor Gregory Leonard of the University of Arizona Department of Planetary Sciences.

“Our investigation also shows that there are also numerous extensive chaotic terrains in other regions of the planet, which have latitudinal distributions ranging from equatorial to subpolar.

Hence, Mercury’s volatile-rich crust appears to be greater than regional, perhaps global, in extent, and it is most likely made up of compositionally diverse volatile compounds. The apparent compositional diversity suggests that the planet’s upper crust might effectively be comprised of a large number of compositional and thermal conditions, some perhaps habitable, existing in Mercury-like exoplanets,” Rodriguez said.

“We also observe evidence of surficial devolatilization, probably caused by solar heating. If so, we have an opportunity to infer the range of Mercury’s volatile properties and compositions. A possibility is that Mercury’s volatile-rich crust was delivered via impacts from the frigid confines of the outer Solar System or the main asteroid belt. Alternatively, volatiles were outgassed from the interior.”

“While not all volatiles make for habitability, water ice can if temperatures are right. Some of Mercury’s other volatiles may have added to the characteristics of a former aqueous niche,” Kargel said. “Even if habitable conditions existed only briefly, relics of prebiotic chemistry or rudimentary life still might exist in the chaotic terrains.”

“if these results are confirmed, this and other similar areas of collapse on Mercury could be important considerations for future landing sites to investigate the origin of the planet’s volatile-rich crust and, perhaps, even its astrobiological potential,” researchers said.