Eddie Gonzales Jr. – MessageToEagle.com – Scientists measured the size of gigantic planets, like Jupiter or Saturn, and now yet another planet that is roughly five times heavier than Jupiter, hence its nickname GOT ‘EM-1b, which stands for Giant Outer Transiting Exoplanet Mass.

Though it is nearly 1,300 light-years away from Earth, GOT ‘EM-1b, or Kepler-1514b as it is officially known, is still considered part of what researchers call our “solar neighborhood.” 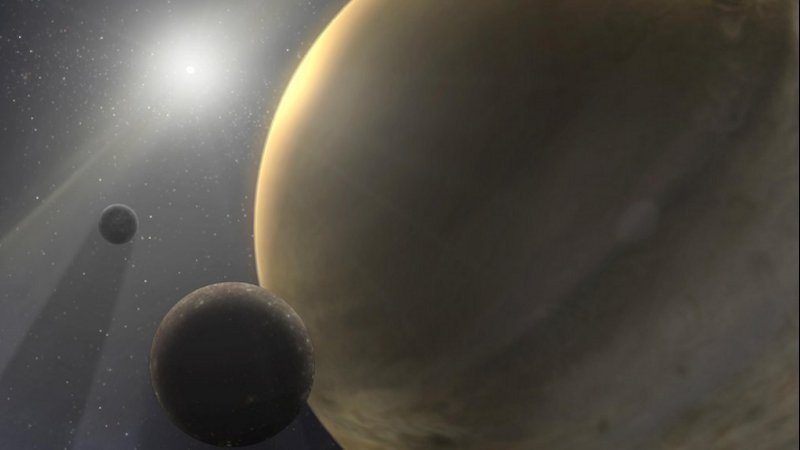 Artist’s rendering of a 10-million-year-old star system with a gas-giant planet like Jupiter. Credit: NASA/JPL-Caltech/T. Pyle

“This planet is like a steppingstone between the giant planets of our own solar system, which are very far from our sun, and other gas giants that are much closer to their stars,” said UCR astronomer Paul Dalba, who led the research.

NASA’s Kepler space telescope originally identified an object, which turned out to be this planet, in 2010. That mission then spotted periodic decreases in the brightness of a star, a clue that orbiting planets are nearby.

Dalba and his team then used W. M. Keck Observatory on Maunakea in Hawaii to determine the planet’s size and density.

Dalba said it was surprising to find a planet such as GOT ‘EM-1b.

“Taking 218 days to orbit a star is an order of magnitude longer than most giant exoplanets we’ve measured,” Dalba said. “Kepler discovered thousands of planets,  and only a few dozen had orbits of a couple of hundred days or longer.”

Giant planets tend to form farther from their stars, then migrate inward over time. The discovery of one that hasn’t moved closer may serve as an analog, offering new insights into our own solar system.

Earth enjoys a lot of relative stability, and astronomers believe Jupiter may be protecting our planet from other objects in space that would impact us. But because they are so massive, planets such as Jupiter have the potential to disturb the orbits, architecture, and development of other nearby planets.

“Giant planets far from their stars can help us answer age-old questions about whether our solar system is normal or not in its stability and development,” explained UCR planetary astrophysicist Stephen Kane, who participated in the research.

“We don’t know of many analogs to Jupiter and Saturn — it’s really hard to find those kinds of planets very far away, so this is exciting,” Kane said.

Dalba explained that data from giant planets closer to their stars is often more difficult to interpret since radiation from the star puffs them up.

“You first have to account for the inflation in size before investigating the composition and other aspects of planets near stars,” Dalba said. “This planet doesn’t have that radius problem, so it’s more straightforward to study.”

For these reasons, the discovery of Kepler-1514b is helpful to future NASA missions, such as the Nancy Grace Roman Space Telescope, which will attempt direct imaging of giant planets.

Dalba is also hoping to learn whether the planet has a moon or system of moons.

“We’ve never found a moon outside our solar system,” Dalba said. “But if we did, it would let us know that moons can form around planets that are experiencing substantial migration, and teach us more about giant planets as a whole.”