MessageToEagle.com – Space is a challenging place. We think of it as mostly empty, but that is not completely true. The vast sea of space in our solar system is filled with powerful radiation and bombarded with high-speed atomic particles. In addition, the Sun generates a continuous stream of particles that we call the “solar wind.”

The high energy radiation, the high energy particles, and the solar wind could prove dangerous to life here on Earth’s surface. Earth’s planetary shield — the Earth’s magnetic field working together with our atmosphere — protects us.

Every magnet generates a magnetic field. Several objects in our solar system also have their own massive magnetic fields: the Sun, Earth, Mercury, Jupiter, Saturn, Uranus, and Neptune. The magnetic field around a planet that extends into space is called a magnetosphere.

Magnetic fields can also create hazards. Magnetospheres trap high energy particles into radiation belts around planets.
The distant gas giant planets do not need protection from the solar wind; instead, their powerful radiation belts create a serious hazard for spacecraft, as do our own Van Allen radiation belts here on Earth.

Earth’s magnetosphere does more than shield us from the constant barrage of high-energy particles. It also protects our atmosphere and oceans from the solar wind, which would otherwise gradually erode them away into space.

Mars’ lack of a magnetosphere may be partly responsible for the thinness of its atmosphere and absent oceans.

A magnetosphere on Venus could have prevented this planet’s primordial water from escaping into space.

Magnetism is a force in nature that is produced by electric fields in motion. This movement can involve electrons ‘spinning’ around atomic nuclei, flowing through a conducting wire or ions moving through space in an organized stream.

Earth’s magnetic field is familiar to us through its effects: our compasses point to the magnetic poles (north and south); it protects our atmosphere from the blast of the solar wind; and particles interact with it to produce the auroras, or northern and southern lights. Similarly, the magnetic fields of Mercury, Jupiter, Saturn, Uranus, and Neptune are detectable with compasses, and we have seen beautiful auroras on Jupiter and Saturn!
Planetary magnetic fields originate from processes deep in each planet’s interior. Earth’s is generated from the electric current caused by the flow of molten metallic material within its outer core. Mercury’s may be generated from its liquid core.
Jupiter and Saturn are composed of gases crushed to such incredible pressures that they are forced beyond the common states of liquid, solid, or gas that we find on Earth.

One such a layer inside Jupiter and Saturn is metallic hydrogen, and the electric current caused by swirling movements in this substance produces a magnetic field so large that the tail of Jupiter’s magnetic field reaches the edge of Saturn’s orbit!

Scientists map planetary magnetic fields with a more sophisticated version of a compass, called a magnetometer.

They also “listen” for the radio signals given off by charged particles as they move through the magnetic field, and measure the properties of ions and electrons directly with particle detectors.

This science visualization shows a magnetospheric substorm, during which, magnetic reconnection causes energy to be rapidly released along the field lines in the magnetotail, that part of the magnetosphere that stretches out behind Earth. This released energy is focused down at the poles and the resulting flood of solar particles into the atmosphere, causes the auroras at the North and South Poles. The Sun has a very large and complex magnetic field. It actually extends far out into space, beyond the furthest planet. The solar wind, the stream of charged particles that flows outward from the Sun, carries the Sun’s magnetic field to the planets and beyond. 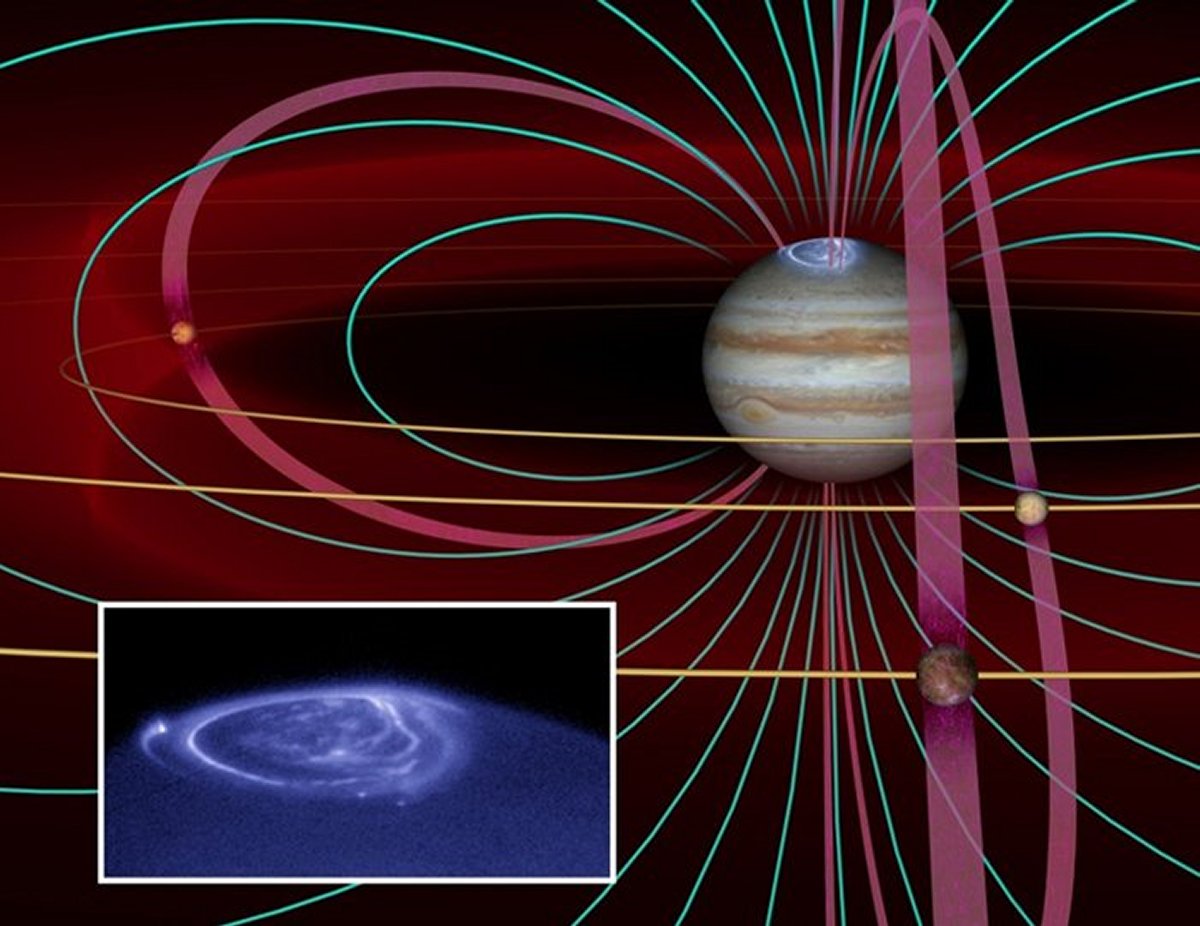 Jupiter is a planet of superlatives: this most massive planet in the solar system, which rotates the fastest, has the strongest magnetic field. These unique properties lead to volcanoes on Io and a population of energetic particles trapped in the magnetic field that provides a physical link between the satellites, particularly between Io, and the planet Jupiter. Every second, a ton of sulfurous gases is stripped from Io. This process generates powerful electrical currents (1 million amps) that flow between Io and Jupiter. The volcanic gases become ionized, trapped in Jupiter’s magnetic field and make a vast doughnut that glows like a street light (2 terrawatts — that’s a million megawatts or thousands of power stations)! Particles slam into Jupiter’s atmosphere, creating auroras. (Image credit: John Clarke & John Spencer)

While the basic shape of the Sun’s magnetic field is like the shape of Earth’s field, with a north and south pole, superimposed on this basic field is a much more complex series of local fields that vary over time.

Unique Extraterrestrial Aurora Photographed Another Wonder Of Our Solar System

Auroras On Alien Worlds Can Be Stunningly Beautiful

What Is The Kármán Line?

Because the ions in the solar plasma are charged, they interact with these magnetic fields, and solar wind particles are swept around planetary magnetospheres, as are particles from the planet’s atmosphere.

At Jupiter and Saturn, the plasma inside the magnetosphere is almost entirely from their moons. Robotic missions investigating these worlds are challenged by the energetic charged particles that are trapped in these planets’ magnetic fields as radiation belts.

This gorgeous view of the aurora was taken from the International Space Station as it crossed over the southern Indian Ocean on September 17, 2011. The sped-up movie spans the time period from 12:22 to 12:45 PM ET. While aurora are often seen near the poles, this aurora appeared at lower latitudes due to a geomagnetic storm – the insertion of energy into Earth’s magnetic environment called the magnetosphere – caused by a coronal mass ejection from the sun that erupted.

Given these critical roles, it is not surprising that several missions are actively investigating these planetary shields. . The Solar Dynamics Observatory is monitoring the Sun and its magnetic field to explore its impact on the near Earth space environment.