Ellen Lloyd – MessageToEagle.com – If extraterrestrials who visited Earth in the past would like to leave a trace of their existence and activities on this planet where would be the place to do it?

Suppose they left a coded message in our DNA, this would mean they wanted us to find it, but only when and if we acquired technology enabling us to read and understand it.

Is it possible that our DNA reflect a computer code, an alien nanotech and ultimately a cosmic fingerprint left by ancient aliens?

According to the Ancient Astronaut theory, humans were created as a result of alien genetic engineering conducted by superior extraterrestrial life-forms. Perhaps millions of years ago life was seeded throughout the galaxy in virtual glass bottles wholesale and sent out through space. One bottle was lucky enough to land here on Earth. 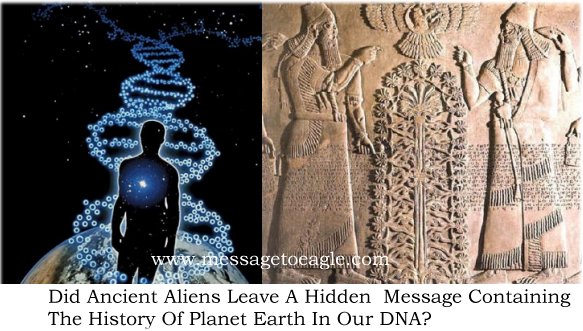 If we examine our DNA, we come across some surprises. There is now scientific proof that 97% non-coding sequences in human DNA is no less than genetic code of extraterrestrial life forms. A study conducted by scientists who were part of the Human Genome Project reveals that an overwhelming majority of Human DNA is of alien origin. “Our hypothesis is that a higher extraterrestrial life form was engaged in creating new life and planting it on various planets. Earth is just one of them,” Professor Chang head of the project said.

Professor Chang further indicates that “What we see in our DNA is a program consisting of two versions, a big code and basic code.” Mr. Chang then affirms that the “First fact is, the complete ‘program’ was positively not written on Earth; that is now a verified fact.

The second fact is, that genes by themselves are not enough to explain evolution; there must be something more in ‘the game’.” “Sooner or later”, Professor Chang says “we have to come to grips with the unbelievable notion that every life on Earth carries genetic code for his extraterrestrial cousin and that evolution is not what we think it is.”

So, if ancient aliens are responsible for the creation of mankind, could they have left a message in our DNA? This is likely, because DNA is a good place to store a large amount of information. As scientists began to unravel and decode the human DNA molecule, they found something amazingly unexpected-a computer programmer’s exquisite ‘language’ composed of some 3 billion genetic letters.

“One of the most extraordinary discoveries of the twentieth century was that DNA actually stores information-the detailed instructions for assembling proteins-in the form of a four-character digital code, “,” said Dr. Stephen Meyer, director of the Center for Science and Culture at the Discovery Institute in Seattle, Washington. 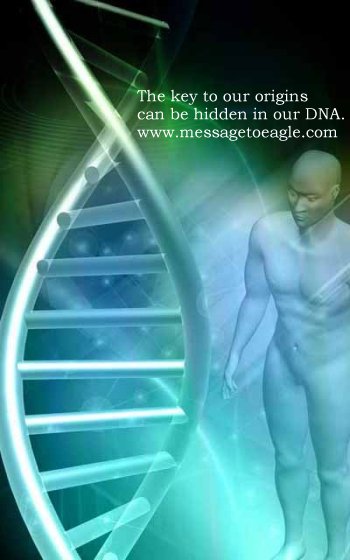 Professor Paul Davies, from the Australian Centre for Astrobiology at Macquarie University in Sydney, put forward his idea that there can be an alien message written in a binary code, hidden on our DNA. “Well in the same way we might imagine that an alien civilization might have put a message in a bottle for anyone who might find it and that anyone could be us, could be human beings, so where is the bottle and where is the message? I’m open to suggestions.

One idea I’ve had is that maybe the bottles are living cells, terrestrial organisms and that the message is encoded in DNA. Viruses are continually infecting organisms on Earth and uploading their DNA into the genomes of those organisms, so there is a well understood pathway for getting information into DNA. We’re littered with it. 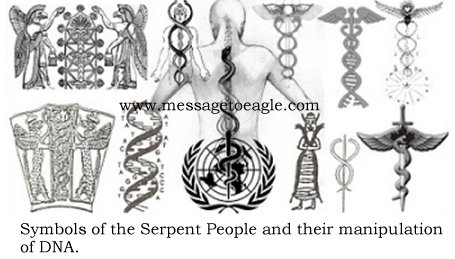 Our own genomes have got huge amounts of this junk that has climbed onboard from viruses over evolutionary history, so if viruses can to it ET can do it and it seems to me that we could in addition to scouring the skies for radio waves with a message encoded we could scour terrestrial genomes, which are being sequenced anyway, to see if there is a message from ET encoded in it. You know, it could be some striking string of nucleotide bases, the famous four letter alphabet that is the language of life, the A’s, G’s, C’s and T’s in the DNA. It might just spell out some sort of message that would attract our attention. Now of course this is a crazy idea. I’m not actually suggesting that there really is a message from ET in genomes. What I’m saying is that is the type of thinking we need. Maybe it is no more crazy than expecting it to be etched into radio waves coming from the sky,” Davies said. We have in our human genetic code a huge complex instruction manual that appears to have been eloquently designed by a more highly intelligent source than humans. The clues to our origins are hidden in the past. 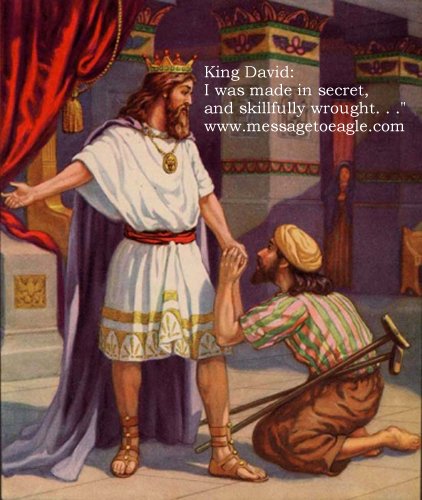 Some thousands of years ago, King David explained the creation of humans by saying: “For You formed my inward parts, You covered me in my mother’s womb. I will praise You, for I am fearfully and wonderfully made . . . My frame was not hidden from You, when I was made in secret, and skillfully wrought. . .”

Readers who pay attention will note that he said “made in secret and skillfully wrought..” His words indicate that he was genetically engineered in a lab!

If there is a hidden ancient alien message in our DN it would contain the entire history of our planet. If that is true, then you and I and all readers of this article carry a cosmic blueprint of our creators, which means we are all children of the stars.

Perhaps one day we will be able to find the hidden cosmic message and ready, and when it happens it will be one of the greatest achievements of mankind.

It feels appropriate to end this story with the words of Zecharia Sitchin: “It was in the image of the Anunnaki, not of bacteria, that Adam and Eve were fashioned.”