Eddie Gonzales Jr. – MessageToEagle.com – Astronomers studying the structure of the Milky Way galaxy have released the highest-resolution 3D view of the Orion star-forming region. The image and interactive figure were presented today at a press conference hosted by the American Astronomical Society. 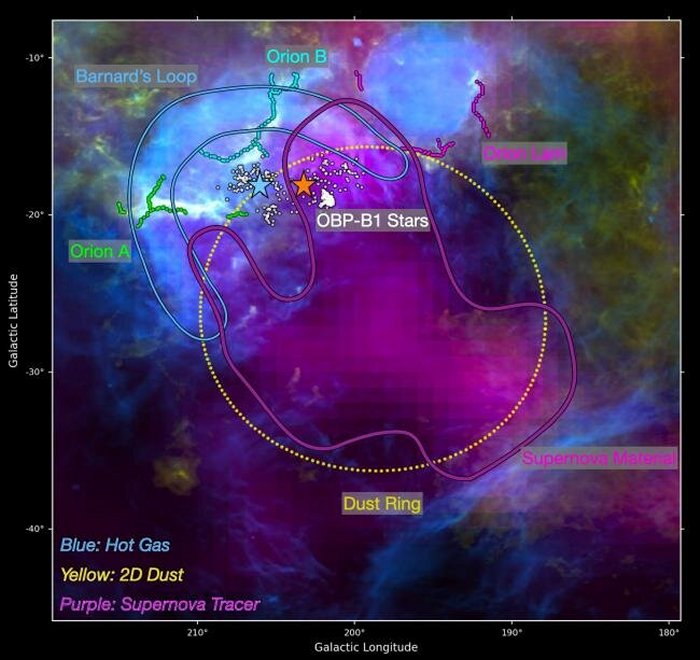 Led by researchers at the Center for Astrophysics | Harvard & Smithsonian, the work connects 3D data on young stars and interstellar gas around the Orion complex of star-forming regions. Analysis of the 2D and 3D images, alongside theoretical modeling, shows that supernova explosions within the last 4 million years produced large cavities in the interstellar material associated with Orion.

One particular cavity the team discovered may help explain the origin of Barnard’s Loop, a famous and mysterious semi-circle in the night sky first observed in 1894.

To 3D and beyond

The study, which is available as a preprint on Authorea, relies on 3D positions and velocities for young stars and interstellar clouds obtained using Gaia, a space telescope run by the European Space Agency. The team combined the Gaia-derived 3D data with existing 2D observations of the Orion region to piece together its star-formation history.

“Our first large-scale 3D look at Orion tells us so much,” says Michael Foley, a graduate student at the Center for Astrophysics (CfA) who led the study. “Prior to this work, most studies of Orion were confined to two dimensions—up-down and left-right on the sky. By adding in the third dimension—distance—we can begin to map out all sorts of interesting structures, like huge cavities of gas and dust or clusters of stars with very interesting motions. Combining the information from the interstellar gas and stars leads us to believe cavities were produced by a number of supernovae over the last few million years.”

“Orion has had quite an exciting history,” he adds.

Catching the culprit: finding a source for Barnard’s Loop

One of the cavities detected by the team appears to correspond with Barnard’s Loop, a famous, giant arc of hot gas in the Orion region that astronomers have studied for over a hundred years. The origin of the arc is debated, but the new study offers evidence that a certain cluster of stars, which produced one or more supernovae, played a very large role in the formation of Barnard’s Loop.

Most of the new star formation in the Orion complex appears to happen on the edges of the giant cavities—one of which is nearly 500 light years wide—that appear throughout the region, suggesting that the supernovae that formed the cavities are ultimately responsible for the formation of the next generation of stars.

The new findings are consistent with the team’s previous work on the Per-Tau Supershell Local Bubble around the Sun.

“It seems clear that we are going to see a ‘swiss cheese’ picture of the interstellar medium, with stars forming at the edge of the holes, as we map more and more of the galaxy,” says Alyssa Goodman, Harvard professor, CfA astronomer and co-author on the study.

“We believe that shells and loops in Orion, the Per-Tau shell, and the Local Bubble are the first of many discoveries relating new star formation to old supernovae,” Foley says. “Supernovae sweep up gas and dust into dense clumps, leading to the perfect birthplaces for new stars. The Orion region, rich in both star formation and supernovae, is the latest example of that.”

The new Orion results support the theory that when massive stars end their lives as supernova explosions, they create conditions ripe for the formation of new stars. The team is hard at work analyzing other regions in the Milky Way galaxy in 3D, and using numerical simulations, to see just how common supernova-driven star formation really is.

“Thanks to the work of many incredible scientists, 3D data will transform our understanding of star formation in our galaxy,” Foley notes. “It may be much more explosive than we even imagine!”

Seeing, and publishing, in 3D

The scholarly paper presenting the Orion work contains 3D interactive figures showcasing the findings, as do essentially all of this team’s recent publications. The team’s interactive figures, which have appeared over the past few years in Nature, The Astrophysical Journal, and The Astrophysical Journal Letters, were produced using the “glue” visualization software created by NASA in-part to explore incoming data from the James Webb Space Telescope.

The figures make use of a plug-in for glue, written by co-author Catherine Zucker of the Space Telescope Science Institute, to export any author’s figures to an interactive graphing environment. The plug-in allows authors to manipulate figures in an ordinary web browser and explore their data further.

Use of the open-source glue software, and web versions of it, are currently making their way from astronomy to other areas of science. Goodman, the founder of glue, hopes that, “soon all scientists will explore their ‘universes’ in 3D, and share findings in publications just as easily as astronomers can today.”