MessageToEagle.com – If you ever wondered just how small Earth really is compared to a giant solar flare eruption, then this stunning illustration from ESA will give you a better understanding of the size of our planet and the power of our Sun.  The largest solar flares are classified as x-class flares and can produce as much energy as a billion hydrogen bombs!

They can be viewed as huge explosions in the solar system and they are very dangerous to our planet.

This image was captured on 27 July 1999 by SOHO, the Solar and Heliospheric Observatory and shows a gigantic ribbon of hot gas bursts upwards from the Sun, guided by a giant loop of invisible magnetism. 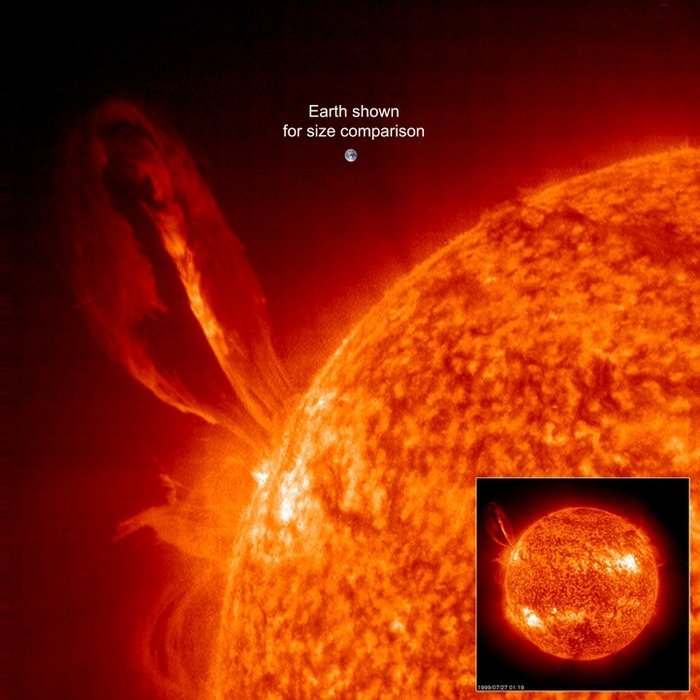 The fiery arches extended about 35 times the diameter of our planet into space from top to bottom into space.

The Sun is predominantly made of plasma, an electrified gas of electrons and ions.

How Dangerous Are The Biggest Solar Flares?

Will A Milky Way Supernova Be Visible From Earth In The Next 50 Years?

Being electrically charged, the ions respond to magnetic fields. So when the magnetic loops reach up into the solar atmosphere, huge streams of plasma are attracted to fill them, creating the prominences that can last for weeks or months. Solar flares are also associated with coronal mass ejections.

If a giant solar flare like this one ever hit Earth, it would disrupt satellites, power grids and communications. It also causes the aurora to shine in the polar skies.