Eddie Gonzales Jr. – MessageToEagle.com – Scientists have been studying the sediments within Mars’ Gale crater for many years using orbital data sets, but thanks to the Curiosity rover driving across these deposits we can also obtain up-close observations and detailed measurements of the rocks, similar to field work done by geologists on Earth.

A new paper led by Planetary Science Institute Senior Scientist Catherine Weitz takes a new look at an enigmatic feature seen in orbital data of Mount Sharp, a 5.5-kilometer-high mound in Gale crater: a darker, stronger, flatter, smooth rock layer or weathering horizon that stands out from the sulfate-bearing rocks in which it occurs. 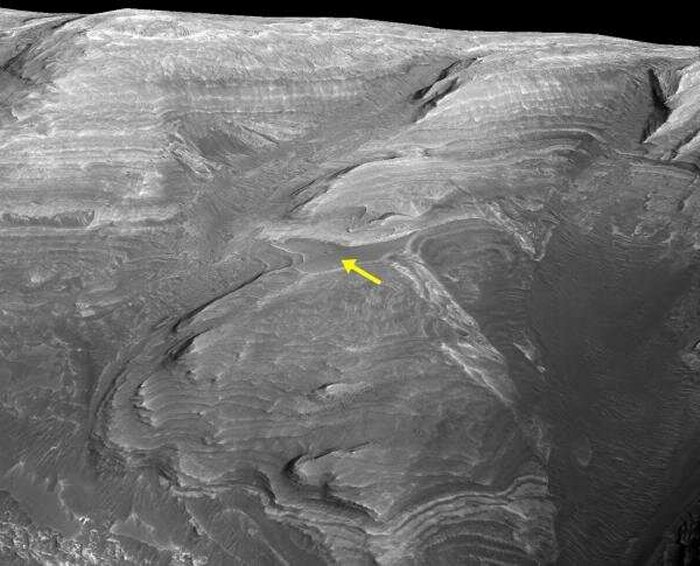 Because the darker horizon can be distinguished in orbital data from the surrounding brighter sulfate-bearing rocks, it can be traced across much of Mount Sharp and it marks a specific time period within the crater, which is why it is referred to as a “marker horizon.”

“Some event occurred within Gale crater during the deposition of sulfate-bearing sediments that resulted in a different kind of rock unit. The marker horizon is distinct in appearance from the sulfate-bearing rocks above and below it, indicating an environmental change occurred for a brief time, such as a drier period, or perhaps a regional event like an explosive eruption from a nearby volcano that deposited ash across a large area which included Gale crater,” Weitz said.

“We used orbital data collected from the High Resolution Imaging Science Experiment (HiRISE), Context Camera (CTX), and Compact Reconnaissance Imaging Spectrometer for Mars (CRISM) instruments on the Mars Reconnaissance Orbiter (MRO) to map out where this marker horizon occurs throughout Mount Sharp and study its appearance and composition. We found that the marker horizon varies in its elevation by 1.6 kilometers across Mount Sharp, that it dips between 1 and 5 degrees away from the center of Gale crater, and it has a mafic composition similar to other basaltic materials including aeolian sands,” said Weitz, lead author of “Orbital Observations of a Marker Horizon at Gale Crater” that appears in the Journal of Geophysical Research: Planets.

“We explored several different formation mechanisms for the marker horizon. It could be composed of the same materials as the sulfate-bearing rocks above and below it, but became harder and more resistant to erosion either during formation or subsequently by water carrying minerals to cement it. 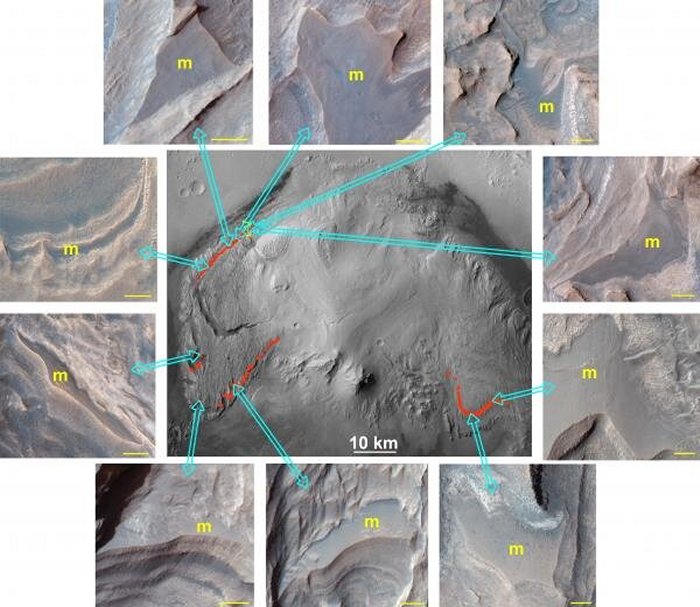 Context Camera (CTX) mosaic of Mount Sharp (center) in Gale Crater with exposures of the marker horizon shown in red. Surrounding the CTX mosaic are HiRISE enhanced color image subsets of the marker horizon (m) taken throughout Mount Sharp, with blue arrows showing approximate locations where each subset occurs in Mount Sharp. The yellow scale bar in each subset image is 50 meters. A different stretch has been applied to each subset image so the colors are not comparable between images. Credit: NASA/MSSS/University of Arizona

The marker horizon could also be a sandstone or lag deposit that formed when it was drier in Gale crater relative to when the sulfates formed. Another possibility is that the horizon contains volcanic ash that was deposited when a nearby volcano explosively erupted ash into the Martian atmosphere that later became hardened. All of these potential origins require the presence of at least some water to cause cementation that hardened the horizon,” Weitz said.

“Our orbital observations currently favor an indurated sulfate or volcanic ash origin, but we will have to wait until the Curiosity rover reaches the horizon in the coming months before determining which origin is most plausible.”

Closer observations will allow scientists to better understand why the marker horizon appears so different from the nearby sulfate outcrops.

“These in situ observations and measurements that Curiosity can make are critical to distinguish between the multiple proposed formation scenarios. Of course, Mars can throw us a curveball and it may turn out that the origin of the marker horizon could be the result of something we did not anticipate from the orbital data sets,” Weitz said.

“Only when Curiosity begins its own investigation of the marker horizon will the data be sufficient to hopefully unravel the origin of this enigmatic marker horizon and help us further understand the intriguing sedimentary history of Gale crater.”