Conny Waters – MessageToEagle.com – Over many centuries, hundreds of ships went down along what is now the coast of Israel. One of them was a 25-meter-long ship that sank about 1,300 years ago, just a few dozen meters from Israel’s coastline. It is believed that nobody perished in the incident. 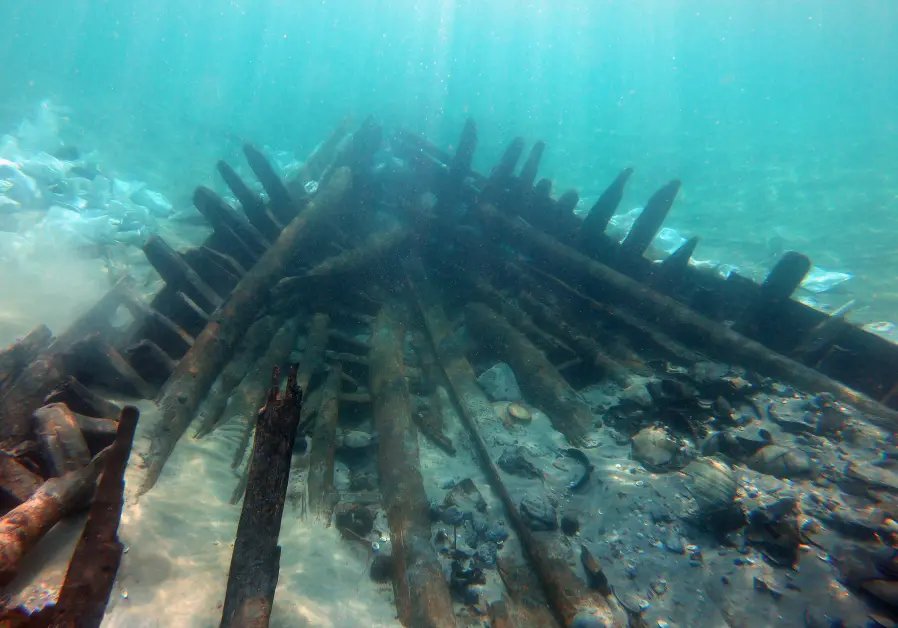 Shipwreck off the coast of Israel. Image credit: A. Yurman/Leon Recanati, Institute For Maritime Studies of the University of Haifa

The ship had a large cargo that included 103 amphorae filled with all forms of agricultural products, numerous daily objects used by the crew and many other unique features along with several Greek and Arabic inscriptions.

First spotted by two members of nearby Kibbutz Ma’agan Michael, about 35 km. south of Haifa, the site was again covered by sand and rediscovered in 2015.

Since 2016, the shipwreck has been excavated by the University of Haifa’s Leon Recanati Institute for Maritime Studie, and the results of this research have offered archaeologists unique insights into the life of the region at the time of the transition between Byzantine and Islamic rule, trade routes, and ship construction.

Moreover, the site presents the largest maritime cargo collection of Byzantine and early Islamic pottery discovered in Israel, not devoid of mystery, since two of the six types of amphorae had never before been uncovered.

The first results of the excavations were examined in two academic papers recently published in the journals Levant and Near Eastern Archaeology. 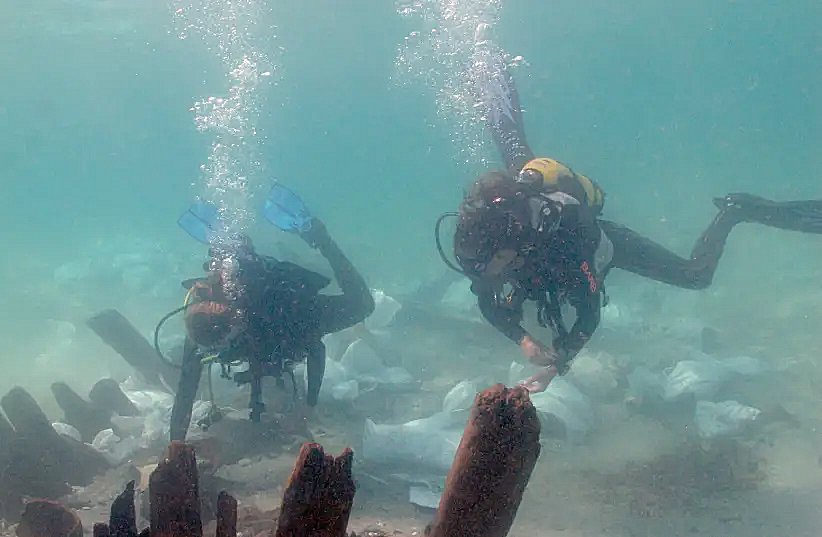 Students Maayan Cohen and Michelle Creisher examine the pottery near the bulkhead at Ma‘agan Mikhael B shipwreck. Image credit: A. Yurman/Leon Recanati, Institute For Maritime Studies of the University of Haifa

“We have not been able to determine with certainty what caused the ship to wreck, but we think it was probably a navigational mistake,” University of Haifa archaeologist Deborah Cvikel, an author of both papers, told The Jerusalem Post. “We are talking about an unusually large vessel, which was carefully built and is beautifully conserved.”

Based on the findings, the researchers believe the ship must have made stops in Cyprus, Egypt and possibly a port along the coast of Israel before sinking, she said, adding: “It was definitely traveling around the Levant.”

The size and richness of the cargo seem to contradict the notion, currently popular among scholars, that during the transition between Byzantine and Islamic rule between the seventh and eighth centuries, commerce in the Eastern Mediterranean was limited.

Inscriptions found by the archaeologists have provided a glimpse of the fascinating complexity of the period, with both Greek and Arabic letters, as well as Christian and Muslim religious symbols, making their way to the ship – whether carved in the wood of the vessel or on the amphorae.

“We do not know whether the crew was Christian or Muslim, but we found traces of both religions,” Cvikel said.

The symbols include the name of Allah written in Arabic, as well as several crosses. The products found in the pottery include olives, dates, figs, fish bones, pine nuts, grapes, and raisins. Many animal bones were found on the ship, perhaps do to eating practices or because they were kept by the crew as pets.

“We have not found any human bone, but we assume that because the ship sank so close to the coast, nobody died in the wreckage,” Cvikel said.

What also makes the site unique is that among the six types of amphorae identified by the archaeologists, two typologies had never emerged anywhere else. Most of the other vessels appeared to have been made in Egypt.

“Ships were built using a method called ‘shell-first’ construction, which was based on strakes, giving the hull its shape and integrity,” Cvikel told the Post. “The main characteristic of this method is the use of mortise-and-tenon joints to connect hull planks. During the fifth to sixth centuries CE, ‘skeleton-first’ construction, in which strakes were fastened to the preconstructed keel and frames, was used.

“This process of ‘transition in ship construction’ has been one of the main topics in the history of shipbuilding for about 70 years, and some issues have remained unanswered. Therefore, each shipwreck of this period holds a vast amount of information that can shed further light onto the process.”

The excavation of the site, which is carried out with the involvement of several master’s and doctoral students, is ongoing, even though this summer the coronavirus emergency has prevented the archaeologist from going back to it.

“We still need to uncover the rear part of the ship, where presumably the captain lived,” Cvikel said. “We also need to carry out more analysis on many of the findings, including the amphorae, their content, the everyday objects, such as the cookware, and the animal bones.”