Eddie Gonzales Jr. – MessageToEagle.com – Less than a week after the James Webb Space Telescope was ready for science, the first reports of discoveries of galaxies at record distances and, consequently, at record-early times appeared in preprints. Even more remarkably, these galaxies seem to be so massive that they challenge our understanding of how structure forms in the universe. 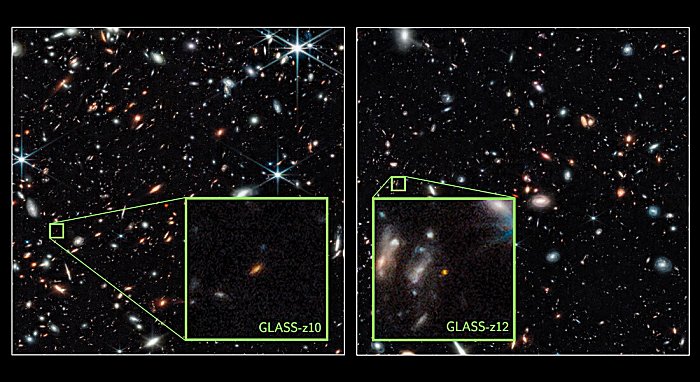 Two regions of the galaxy cluster Abell 2744, the gravity of which magnifies the light from extremely distant background galaxies. The colors are composed of several infrared images, and the large fields are 2 arcminutes across, corresponding to 1/16 of the width of the full moon. The zoom-ins show the galaxies GLASS-z10 and GLASS-z12, where the latter is a candidate for the most distant galaxy ever discovered. Credit: NASA, ESA, CSA, Tommaso Treu (UCLA), Zolt G. Levay (STScI).

Now the two first of these reports have undergone the mandatory peer-review and have been accepted for publication in the scientific journal The Astrophysical Journal Letters, substantiating the robustness of the result. However, astronomers are still waiting for the conclusive evidence—spectroscopy.

Just five days after the James Webb Space Telescope started its scientific observations in July, the first reports of record-breaking galaxies appeared. Not yet in scientific journals, but on the preprint server arXiv.org where researchers, eager to publish their results, usually upload their manuscripts simultaneously with submitting them to the journals.

Although the articles had not yet undergone the peer-review process which is so crucial to science, they naturally attracted the attention of the media.

The reason was not only that the explored universe had now grown in size. What is more intriguing is that the galaxies seemingly are hosting many more stars than we thought would be possible. Indeed the very fundamentals of our understanding of how massive structures build up over time is challenged; the “cosmological standard model”.

“From a theoretical point of view, the observed masses are quite puzzling,” explains Charlotte Mason, associate professor at the Cosmic Dawn Center (DAWN) in Copenhagen. “We would expect that we would have to search a much, much larger volume of space before finding such big galaxies. The average galaxy simply shouldn’t have had the time to build up so much mass in the short time between the Big Bang and the time at which we see them.”

Mason is the coauthor of one of the first two papers which have now been accepted for publication. This work, led by Marco Castellano at INAF Osservatorio Astronomico di Roma, reports on the detection of several record distant galaxies.

The report appeared in preprint simultaneously with another paper, led by Rohan Naidu at MIT, that analyzed the same field on the sky and found several of the same galaxies.

A rather robust result

As detailed in a recent press release from the Cosmic Dawn Center, the technique used to determine the distances is a fast, but somewhat unreliable method, which is known to sometimes confuse more nearby galaxies (or even local stars) with very distant ones. To confirm the distance, each galaxy must be followed up with the more time-consuming spectroscopy, where the exact wavelength of each photon is measured. 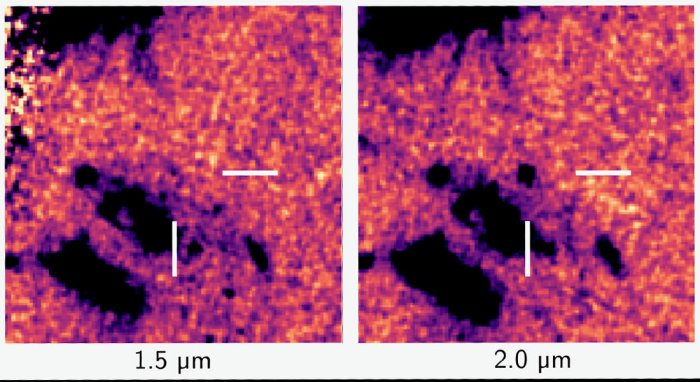 The candidate for the most distant galaxy ever seen — called GLASS-z12 — through two different infrared filters which transmit light at 1.5 and 2.0 micrometers, respectively. The white bars mark the position of the galaxy, and darker colors represent more light. Because the galaxy’s short wavelengths are absorbed by enshrouding gas, it is virtually invisible in the 1.5 µm filter. This allowed the astronomers to estimate its distance. Credit: . Naidu, P. Oesch, et al.

Despite the missing spectroscopy, the distances of two of the galaxies—dubbed GLASS-z10 and GLASS-z12—seem rather unambiguous. And the fact that two different teams, using two different analyses of the same data, found the same distance is reassuring.

Moreover, the analysis carried out by the Naidu team was used in the exact same way for a slightly less distant galaxy, also observed with James Webb, which was recently confirmed spectroscopically by a third team, led by Haley Williams at the Minnesota Institute for Astrophysics.

Gabriel Brammer, associate professor at DAWN, participated in the studies by both the Naidu team and the Williams team. He is also the developer of the software used to analyze the data. As is common in astronomy, Brammer’s software is publicly available, and a popular tool among other astronomers.

“We have used the same software and analysis for another galaxy which is almost as distant as GLASS-z10. I was very happy to see our result confirmed spectroscopically. This demonstrates the capability of the analysis and gives us confidence that the inferred result is rather robust,” Brammer says.

Although the galaxies’ large masses are difficult to reconcile with our current understanding of structure formation, it does not necessarily mean that we will need to revise the standard model of the universe. Several less dramatic, but nonetheless interesting explanations are also in the pipeline:

“We know very little about the physical conditions the early universe,” says Pascal Oesch, second-author on the Naidu paper and associate professor at DAWN. “Throughout most of the history of the universe, galaxies are surprisingly inefficient at forming stars. Perhaps some yet unknown mechanism enabled early galaxies to form stars faster, or to form brighter stars.”

With the upcoming spectroscopy, as well as near-future observations surveying larger volumes of space, the true nature of these and similar mystifying galaxies will soon be unveiled.