MessageToEagle.com – For the first time, astronomers discovered  a  proof of the existence of major impacts, as has apparently occurred in the Kepler 107 system.

The central star, Kepler 107, is a bit bigger than the Sun, and has four planets rotating around it; it was the two innermost planets which drew the interest of the astrophysicists. 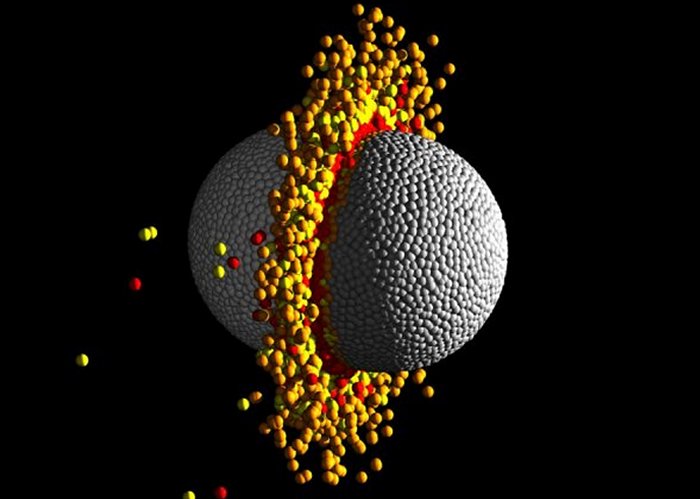 The figure shows one frame from the middle of a hydrodynamical simulation of a high-speed head-on collision between two 10 Earth-mass planets. The temperature range of the material is represented by four colors grey, orange, yellow and red, where grey is the coolest and red is the hottest. Such collisions eject a large amount of the silicate mantle material leaving a high-iron content, high-density remnant planet similar to the observed characteristics of Kepler-107c. Credit: Z. M. Leinhardt and T. Denman (Univ Bristol)

Using data from NASA’s Kepler satellite and from the National Galileo Telescope (TNG) at the Roque de los Muchachos Observatory (Garafía, La Palma, Canary Islands), the team determined the parameters of the star, and measured the radii and masses of these planets. Although the innermost two have similar radii their masses are very different.

In fact the second is three times denser than the first.

The extraordinarily high density of the planet Kepler 107c is more than double that of the Earth. This exceptional density for a planet has intrigued researchers, and suggests that its metallic core, its densest part, is anomalously big for a planet.

This would be still considered normal if it were not for the prediction that photo-evaporation causes the densest planet in a system to be the nearest to its star. To explain how it is possible that, in this case, the nearest has only half the density of the second, the hypothesis was proposed that the planet Kepler 107c was formed as the result of a major impact. This impact must have ripped away its outer layers, thus leaving the central core as a much bigger fraction than before. After tests carried out via simulations, this hypothesis seems to be the most likely.

This study will allow us to better understand the formation and evolution of exoplanets. Specifically it picks out the importance of the relationship between stellar physics and exoplanetary research.

“We need to know the star to better understand the planets which are in orbit around it” Savita Mathur, a researcher at the IAC in Tenerife, and one of the authors of the article, said in a press release.

“In this study we made a seismic analysis to estimate the parameters of the star which hosts the planet. Asteroseismology – [the study of the interior of stars by the observation and analysis of oscillations at their surface ]-  plays a key role in the field of the exoplanets, because it has been shown that it is one of the best methods for a precise characterization of the stars.”

That is why during the past decade it has become one of the main methods for characterizing stars, and it will remain so in the coming years, thanks to the space missions for discovering exoplanets: TESS (NASA) and PLATO (ESA).