Eddie Gonzales Jr. – MessageToEagle.com – Astronomers have seen some pretty weird things scattered across our vast universe, from exploding stars to colliding galaxies. So, you’d think that when they see a strange celestial object, they would be able to identify it.

But NASA’s Hubble Space Telescope uncovered what appears to be a pair of identical objects that look so weird it took astronomers several years to determine what they are. 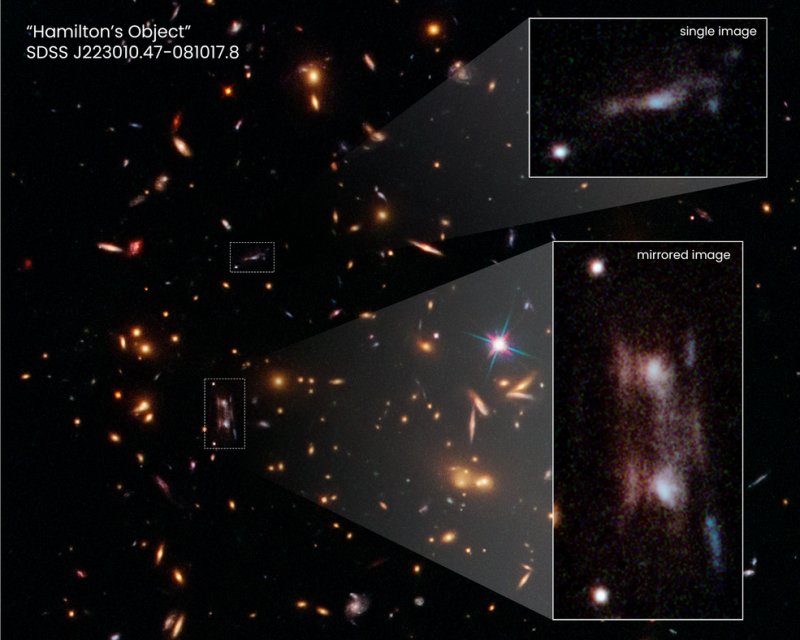 This Hubble Space Telescope snapshot shows three magnified images of a distant galaxy embedded in a cluster of galaxies. These images are produced by a trick of nature called gravitational lensing. The galaxy cluster’s immense gravity magnifies and distorts the light from the distant galaxy behind it, creating the multiple images. The galaxy cluster, catalogued as SDSS J223010.47-081017.8, is 7 billion light-years from Earth. Hubble has observed many gravitationally lensed galaxies. However, the images spotted in this Hubble snapshot are unique…. More

The oddball objects consist of a pair of galaxy bulges (the central star-filled hub of a galaxy) and at least three nearly parallel split streaks. Hamilton spotted them by accident while using Hubble to survey a collection of quasars, the blazing cores of active galaxies. After chasing dead-end theories, soliciting help from colleagues, and doing lots of head-scratching, Hamilton and the growing team, led by Richard Griffiths of the University of Hawaii in Hilo, finally put together all of the clues to solve the mystery.

The linear objects were the stretched images of a gravitationally lensed distant galaxy, located more than 11 billion light-years away. And, they appeared to be mirror images of each other.

The team discovered that the immense gravity of an intervening, and uncatalogued, foreground cluster of galaxies was warping space, magnifying, brightening, and stretching the image of a distant galaxy behind it, a phenomenon called gravitational lensing. Though Hubble surveys reveal a lot of these funhouse-mirror distortions caused by gravitational lensing, this object was uniquely perplexing.

In this case, a precise alignment between a background galaxy and a foreground galaxy cluster produces twin magnified copies of the same image of the remote galaxy. This rare phenomenon occurs because the background galaxy straddles a ripple in the fabric of space. This “ripple” is an area of greatest magnification, caused by the gravity of dense amounts of dark matter, the unseen glue that makes up most of the universe’s mass. As light from the faraway galaxy passes through the cluster along this ripple, two mirror images are produced, along with a third image that can be seen off to the side.

In the gravitationally lensed distant galaxy, the ripple is greatly magnifying and distorting the light from the background galaxy that is passing through the cluster. The ripple acts like an imperfect curvy mirror that generates the dual copies.

But this rare phenomenon wasn’t well-known when Hamilton spotted the strange linear features in 2013. As he looked through the quasar images, the snapshot of the mirrored images and parallel streaks stood out. Hamilton had never seen anything like it before, and neither had other team members.

“My first thought was that maybe they were interacting galaxies with tidally stretched-out arms,” Hamilton said. “It didn’t really fit well, but I didn’t know what else to think.”

So Hamilton and the team began their quest to solve the mystery of these tantalizing straight lines, later dubbed Hamilton’s Object for its discoverer. They showed the strange image to colleagues at astronomy conferences, which elicited a variety of responses, from cosmic strings to planetary nebulae.

But then Griffiths, who was not a member of the original team, offered the most plausible explanation when Hamilton showed him the image at a NASA meeting in 2015. It was a magnified and distorted image caused by a lensing phenomenon similar to those seen in Hubble images of other massive galaxy clusters that are amplifying images of very distant galaxies. Griffiths confirmed this idea when he learned of a similar linear object in one of Hubble’s deep-cluster surveys.

The researchers, however, still had a problem. They couldn’t identify the lensing cluster. Normally, astronomers who study galaxy clusters first see the foreground cluster that’s causing the lensing, and then find the magnified images of distant galaxies within the cluster. A search of the Sloan Digital Sky Survey images revealed that a galaxy cluster resided in the same area as the magnified images, but it did not show up in any catalogued survey. Nevertheless, the fact that the strange images were at the center of a cluster made it clear to Griffiths that the cluster was producing the lensed images.

The researchers’ next step was in determining whether the three lensed images were at the same distance, and therefore were all the distorted portraits of the same faraway galaxy. Spectroscopic measurements with the Gemini and W. M. Keck observatories in Hawaii helped the researchers make that confirmation, showing that the lensed images were from a galaxy located more than 11 billion light-years away.

The remote galaxy, based on a reconstruction of the third lensed image, appears to be an edge-on, barred spiral with ongoing, clumpy star formation. Around the same time as the spectroscopic observations by Griffiths and undergraduates in Hilo, a separate group of researchers in Chicago identified the cluster and measured its distance using Sloan data. The cluster resides more than 7 billion light-years away.

But, with very little information about the cluster, Griffiths’ team was still struggling with how to interpret these unusual lensing shapes. “This gravitational lens is very different from most of the lenses that were studied before by Hubble, particularly in the Hubble Frontier Fields survey of clusters,” Griffiths explained. “You don’t have to stare at those clusters for long to find many lenses. In this object, this is the only lens we have. And we didn’t even know about the cluster at first.”

That’s when Griffiths called an expert on gravitational lensing theory, Jenny Wagner of the University of Heidelberg in Germany. Wagner had studied similar objects and, with colleague Nicolas Tessore, now at the University of Manchester in England, developed computer software for interpreting unique lenses like this one. Their software helped the team figure out how all three lensed images came to be. They concluded that the dark matter around the stretched images had to be “smoothly” distributed in space at small scales.

“It’s great that we only need two mirror images in order to get the scale of how clumpy or not dark matter can be at these positions,” Wagner said. “Here, we don’t use any lens models. We just take the observables of the multiple images and the fact they can be transformed into one another. They can be folded into one another by our method. This already gives us an idea of how smooth the dark matter needs to be at these two positions.”

This result is important, Griffiths said, because astronomers still don’t know what dark matter is, nearly a century after its discovery. “We know it’s some form of matter, but we have no idea what the constituent particle is. So we don’t know how it behaves at all. We just know that it has mass and is subject to gravity. The significance of the limits of size on the clumping or smoothness is that it gives us some clues as to what the particle might be. The smaller the dark matter clumps, the more massive the particles must be.”