Jan Bartek – MessageToEagle.com – The theory there was once a second sphinx is not new, but despite many claims no-one has been able to provide solid evidence of a twin Sphinx. Has this finally changed with the surprising announcement of the discovery of a mysterious ancient monument resembling the Great Sphinx of Giza?

As previously reported on AncientPages.com, some years ago historians, Gerry Cannon and Malcolm Hutton said the Great Sphinx of Giza may have had a twin sister. 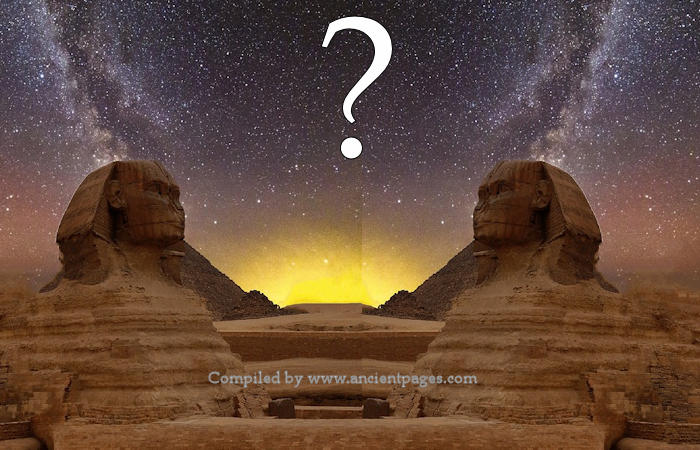 “The historians’ research pointed to the fact that any sphinx had to have been carved out of natural rock and long before sand covered the area. This means the statues must have been carved when the area had a much warmer and fertile climate. In ancient times, some thousand years ago, this vast area was fertile grassland.

Then something happened and the Green Sahara turned into a desert.

Today there is enough evidence to show that the Sahara desert had once a grassland ecosystem and was a much wetter place than it is today. The Great Sphinx and its companion must have been built during this time.

“The Sphinx had to have been carved when there was no sand there. You can’t carve a rock when it’s under sand. When it was not under sand was about 12,000 years ago and the Egyptians weren’t there,” Cannon said.” 1

However, Gerry Cannon and Malcolm Hutton are not the only ones who considered the possibility a second Sphinx is hidden somewhere in Egypt.

In a recent announcement Dr. Reda Abdel Halim, the director of public relations for the Giza pyramids district at the Egyptian Ministry of Tourism and Antiquities told Cairo Live 24 that he discovered a statue in the pyramids area that is of similar size to the Sphinx.

Dr. Halim explained that this rock has existed for a long time in the tenth of King Khafre and perhaps before him, because some inscriptions found inside suggest that there is a connection between these, the rock and the ancient first Sphinx.

The statue found by Dr. Halim is 73 meters high, with a head 20.5 meters high, and hands extended over 15.5 meters, like the Sphinx.

Dr. Halim also added that scientific research was published at Zagazig University confirming the existence of this statue.

Needless to say, that Dr. Halim’s news has been met with skepticism and there is no lack of objection to his claims.

This is completely not true,” Zahi Hawass, former Minister of Antiquities and an archaeologist who oversaw the pyramids area for nearly 20 years, told Al-Monitor.

“The Sphinx is unique in Egypt and the world. … Any talk about discoveries of other similar statues is baseless and has only one purpose, which is creating media fanfare,” he added.

“Any claims about research on the Sphinx at the Zagazig University is also false,” Hawass went on, stressing that Egyptian archaeologists are not aware of current scientific research in any Egyptian university about the discovery of any such statue.

“Studies and research must be published in a scientific journal so that we can respond with scientific evidence. Talks about a text that is said to have been inscribed on the Sphinx but got erased by the passage of the time mentioning the existence of another similar statue, are baseless,” Hawass said.

“During the many years I headed the Giza pyramids area, we worked along Egyptian and foreign experts and archeologists, scanning the entire area, and I can assure there is not another statue of the Sphinx,” he added.

Dr. Halim contradicted Hawass by saying the writings on the original statue that were erased are proof of his claims.

However, Egyptian officials deny these controversial claims stating the area around the Giza pyramid is an active archaeological zone. If there was another Sphinx hidden somewhere it would have been discovered two hundred years ago.

Nevin al-Arif, a media advisor to the minister of tourism and antiquities, told Al-Monitor, “All these statements about a new Sphinx are baseless.” Archaeologists and experts, including the Secretary-General of the Supreme Council of Antiquities, Mustafa al-Waziri, have denied the claims, she said.

“The statue in question was discovered a long time ago in the area and has nothing to do with the original Sphinx. It is nothing but a normal statue,” she told Al-Monitor.

When a major discovery is made, “the ministry would fully coordinate with those in charge of the discovery,” Arif explained. “The ministry is usually informed of all the details of such a discovery, which would be officially announced during a press conference in the presence of local and foreign reporters and journalists.”