Nitrogen gas (also found in air on Earth) comprises most of Pluto’s thin atmosphere and covers part of Pluto’s surface in the shape of a heart. 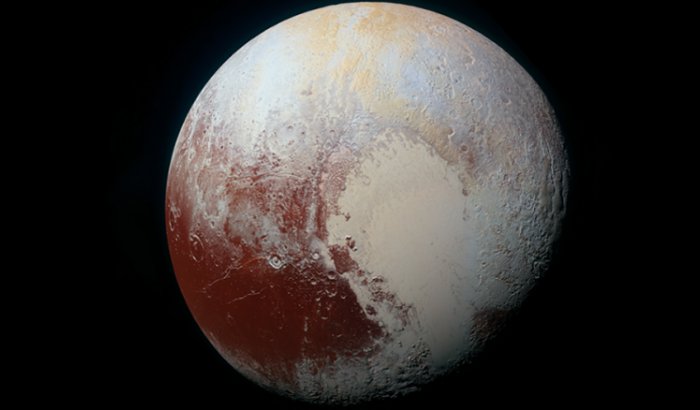 During the day, a thin layer of this nitrogen ice warms and turns into vapor. At night, the vapor condenses and once again forms ice. Each sequence is like a heartbeat, pumping nitrogen winds around the dwarf planet.

This cycle pushes Pluto’s atmosphere to circulate in the opposite direction of its spin – a unique phenomenon called retro-rotation. As air whips close to the surface, it transports heat, grains of ice and haze particles to create dark wind streaks and plains across the north and northwestern regions.

“This highlights the fact that Pluto’s atmosphere and winds – even if the density of the atmosphere is very low – can impact the surface,” Tanguy Bertrand, an astrophysicist and planetary scientist at NASA’s Ames Research Center in California and the study’s lead author, said in a press release.

Most of Pluto’s nitrogen ice is confined to Tombaugh Regio. Its left “lobe” is a 1,000-kilometer (620-mile) ice sheet located in a 3-kilometer (1.9-mile) deep basin named Sputnik Planitia – an area that holds most of the dwarf planet’s nitrogen ice because of its low elevation. The heart’s right “lobe” is comprised of highlands and nitrogen-rich glaciers that extend into the basin. 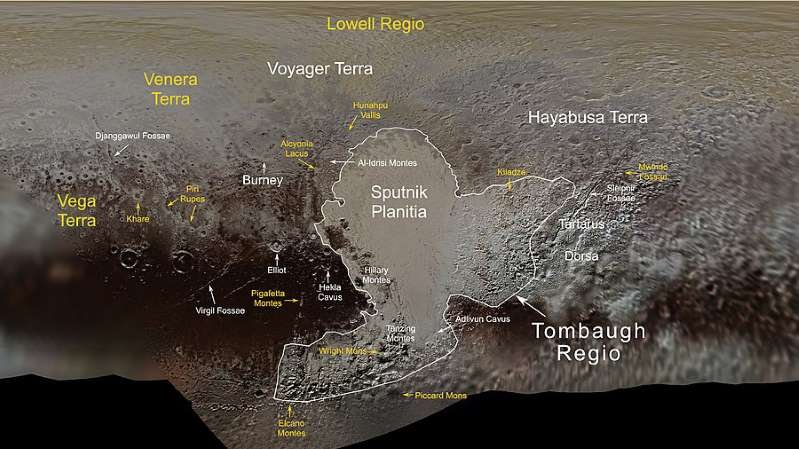 This map, stitched together from images and data gathered by NASA’s New Horizons spacecraft in 2015, shows the names of features on Pluto’s surface. Credits: NASA/JHUAPL/SwRI/Ross Beyer

“Before New Horizons, everyone thought Pluto was going to be a netball – completely flat, almost no diversity,” Bertrand said. “But it’s completely different. It has a lot of different landscapes and we are trying to understand what’s going on there.”

To determine how circulating air on Pluto – which is 100,000 times thinner than that of Earth’s – might shape features on the surface, the team used data from New Horizons’ 2015 flyby to depict Pluto’s topography and its blankets of nitrogen ice.

Subsequently, they simulated the nitrogen cycle with a weather forecast model and assessed how winds blew across the surface.

Pluto’s winds above 4 kilometers (2.5 miles) blow to the west — the opposite direction from the dwarf planet’s eastern spin — in a retro-rotation during most of its year. As nitrogen within Tombaugh Regio vaporizes in the north and becomes ice in the south, its movement triggers westward winds, according to the new study. No other place in the solar system has such an atmosphere, except perhaps Neptune’s moon Triton.

Additionally, the researchers also found a strong current of fast-moving, near-surface air along the western boundary of the Sputnik Planitia basin, a giant basin filled with nitrogen ice.

These wind patterns stemming from Pluto’s nitrogen heart may explain why it hosts dark plains and wind streaks to the west of Sputnik Planitia. Winds could transport heat—which would warm the surface—or could erode and darken the ice by transporting and depositing haze particles. If winds on the dwarf planet swirled in a different direction, its landscapes might look completely different.