MessageToEagle.com – Archaeologists have on several occasions unearthed a number of strange mummies.

The Lady of the Mask, a Wari mummy is extraordinary because of her faked blue eyes. It is a face you don’t forget easily.

The Wari people lived in the Andean highlands of central Peru, but their influence reached beyond the highlands to the Pacific coastline.

The Wari culture is believed to have flourished D 600-1000, meaning before the Incas. Unfortunately these people never developed a written language and left no inscriptions that would provide critical clues to their customs and beliefs. 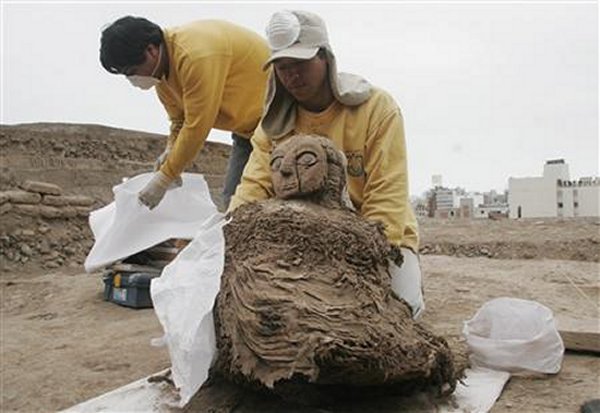 A 1,300-year-old-mummy unearthed by archaeologists excavating a pyramid in Peru’s capital city Lima could in time reveal the secrets of this lost culture.

Besides the female mummy, the tomb contained the remains of two other adults and a child. It is the first intact Wari burial site discovered at Huaca Pucllana in the capital Lima, and researchers believe it dates from about 700 AD. 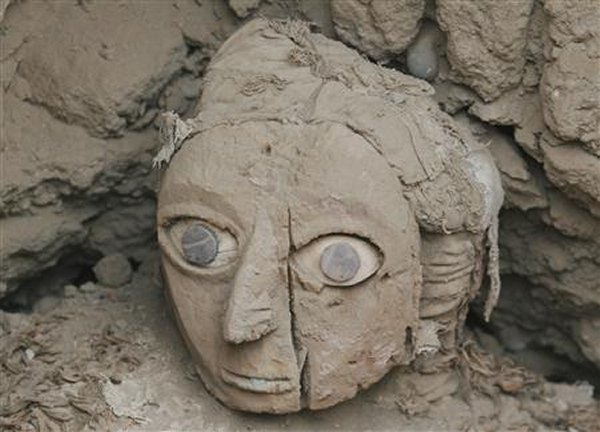 “We’d discovered other tombs before,” said Isabel Flores, director of the ruins.
“But they always had holes, or were damaged. Never had we found a whole tomb like this one — intact,” she said, standing on the ancient plaza, a huge partially excavated mound of rocks, bricks and dirt.

Workers wrapped the female mummy in tissue paper before lifting it onto a flat wood board.

They exposed her face, revealing two big, bright blue orbs in her eye sockets. They extracted the other adult mummies, which were also whole, earlier in the week. 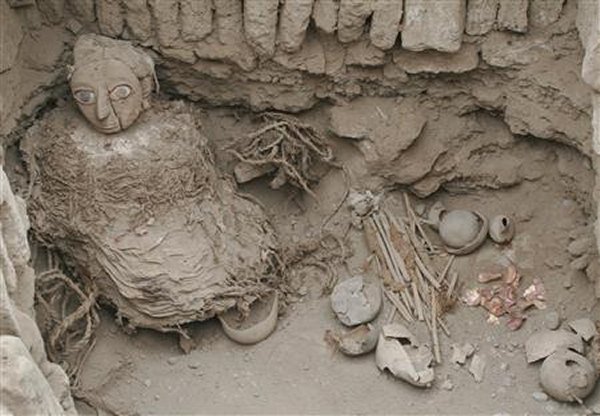 “Her face startled me at first,” said Miguel Angel, 19, a worker at Huaca Pucllana who helped unearth the tomb.

“I wasn’t expecting to find anything like that,” he said.

It is not clear what the fake eyes were made of. Another question that remains unanswered is why the eyes were blue.