Eddie Gonzales Jr. – MessageToEagle.com – A camera usually requires a lens system to capture a focused image, and the lensed camera has been the dominant imaging solution for centuries.

A lensed camera requires a complex lens system to achieve high-quality, bright, and aberration-free imaging. Recent decades have seen a surge in the demand for smaller, lighter, and cheaper cameras.

A schematic of the how the lensless imaging process works, from light collection through encoding the signal to post-processing with computing algorithms. Credit: Xiuxi Pan from Tokyo Tech

There is a clear need for next-generation cameras with high functionality, compact enough to be installed anywhere. However, the miniaturization of the lensed camera is restricted by the lens system and the focusing distance required by refractive lenses.

Recent advances in computing technology can simplify the lens system by substituting computing for some parts of the optical system. The entire lens can be abandoned thanks to the use of image reconstruction computing, allowing for a lensless camera, which is ultra-thin, lightweight, and low-cost. The lensless camera has been gaining traction recently. But thus far, the image reconstruction technique has not been established, resulting in inadequate imaging quality and tedious computation time for the lensless camera.

Recently, researchers have developed a new image reconstruction method that improves computation time and provides high-quality images. Describing the initial motivation behind the research, a core member of the research team, Prof. Masahiro Yamaguchi of Tokyo Tech, says, “Without the limitations of a lens, the lensless camera could be ultra-miniature, which could allow new applications that are beyond our imagination.”

The typical optical hardware of the lensless camera simply consists of a thin mask and an image sensor. The image is then reconstructed using a mathematical algorithm. The mask and the sensor can be fabricated together in established semiconductor manufacturing processes for future production. The mask optically encodes the incident light and casts patterns on the sensor. Though the casted patterns are completely non-interpretable to the human eye, they can be decoded with explicit knowledge of the optical system. 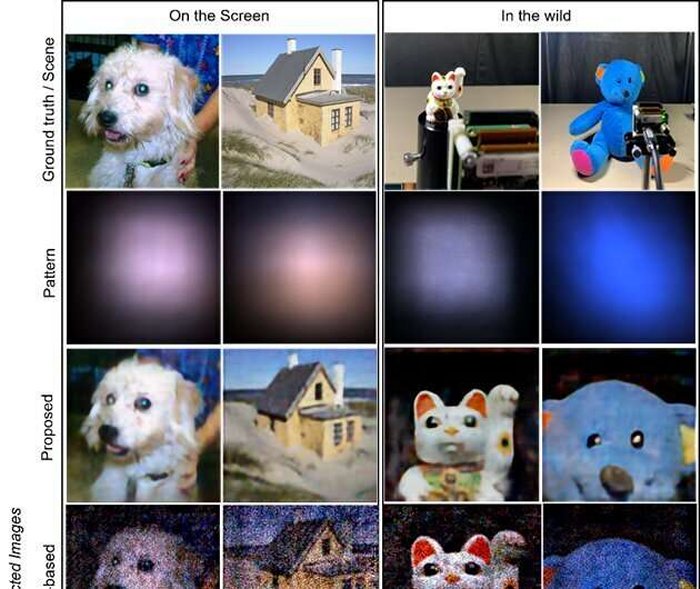 The targets are the images displayed on an LCD screen (left two columns) and the objects in the wild (right two columns; beckoning cat doll and stuffed bear), respectively. The first row shows the ground truth images displayed on the screen and the shooting scenes for in-the-wild objects. The second row shows the captured patterns on the sensor. The last three rows illustrate the reconstructed images by the proposed, model-based, and CNN-based methods, respectively. The proposed method produces the most high-quality and visually appealing images. Credit: Xiuxi Pan from Tokyo Tech

However, the decoding process—based on image reconstruction technology—remains challenging. Traditional model-based decoding methods approximate the physical process of the lensless optics and reconstruct the image by solving a “convex” optimization problem.

This means the reconstruction result is susceptible to the imperfect approximations of the physical model. Moreover, the computation needed for solving the optimization problem is time-consuming because it requires iterative calculation. Deep learning could help avoid the limitations of model-based decoding since it can learn the model and decode the image by a non-iterative direct process instead.

However, existing deep learning methods for lensless imaging, which utilize a convolutional neural network (CNN), cannot produce high-quality images. They are inefficient because CNN processes the image based on the relationships of neighboring “local” pixels, whereas lensless optics transform local information in the scene into overlapping “global” information on all the pixels of the image sensor, through a property called “multiplexing.”

The Tokyo Tech research team is studying this multiplexing property and have now proposed a novel, dedicated machine learning algorithm for image reconstruction. The proposed algorithm is based on a leading-edge machine learning technique called Vision Transformer (ViT), which is better at global feature reasoning. The novelty of the algorithm lies in the structure of the multistage transformer blocks with overlapped “patchify” modules. This allows it to efficiently learn image features in a hierarchical representation. Consequently, the proposed method can well address the multiplexing property and avoid the limitations of conventional CNN-based deep learning, allowing better image reconstruction.

While conventional model-based methods require long computation times for iterative processing, the proposed method is faster because the direct reconstruction is possible with an iterative-free processing algorithm designed by machine learning. The influence of model approximation errors is also dramatically reduced because the machine learning system learns the physical model. Furthermore, the proposed ViT-based method uses global features in the image and is suitable for processing casted patterns over a wide area on the image sensor, whereas conventional machine learning-based decoding methods mainly learn local relationships by CNN.

In summary, the proposed method solves the limitations of conventional methods such as iterative image reconstruction-based processing and CNN-based machine learning with the ViT architecture, enabling the acquisition of high-quality images in a short amount of computing time.

The research team further performed optical experiments—as reported in their latest publication in—which suggest that the lensless camera with the proposed reconstruction method can produce high-quality and visually appealing images while the speed of post-processing computation is high enough for real-time capture.

The ultimate goal of a lensless camera is being miniature-yet-mighty. We are excited to be leading in this new direction for next-generation imaging and sensing solutions,” says the lead author of the study, Mr. Xiuxi Pan of Tokyo Tech, while talking about their future work.