MessageToEagle.com – The ancient Tully Monster is a decades-old paleontological mystery that scientists still cannot solve. The ancient animal is so weird it simply doesn’t fit any classification.

First discovered in the 1950s in Mazon Creek, a prolific fossil bed in central Illinois, the Tully Monster, Tullimonstrum gregarium has become a scientific challenge.

Though thousands of Tully specimens have been recovered from 300-million-year-old ironstone strata, scientists have been unable to make out exactly what the Tully Monster is.

This unusual ancient animal was previously classified as a type of fish after decades of uncertainty. 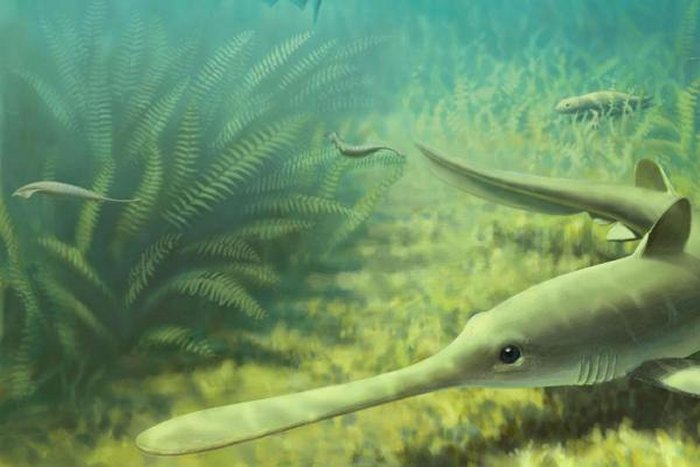 An illustration shows two Tully Monsters — the smaller creatures in the middle ground — swimming in Mazon Creek some 300 million years ago. Photo by John Megahan

However, according to a new study by paleobiologists at the University of Pennsylvania the Tully Monster is not a vertebrate, an animal that has a backbone and a skeleton. ‘

Scientists do not team has not proposed an alternate classification, but they do argue that the previous study was flawed.

Kiss Of Death: Mammals Were The First To Produce Deadly Venomous 260 Million Years Ago

Our Jaw Evolved From Placodermi: A 423-Million-Year-Old Armored Fish

Secrets Of The Pineal Gland: Our Ancestors’ Third Eye And Its Link To Mammal Evolution

“This animal doesn’t fit easy classification because it’s so weird,” Lauren Sallan, an assistant professor at the University of Pennsylvania.

The Tully Monster has challenged scientists ever since it was first discovered. Image credit: Sean McMahon / Yale University

“”It has these eyes that are on stalks and it has this pincer at the end of a long proboscis and there’s even disagreement about which way is up. But the last thing that the Tully Monster could be is a fish.”

“It’s important to incorporate all lines of evidence when considering enigmatic fossils: anatomical, preservational and comparative,” said Sam Giles, a junior research fellow at the University of Oxford and coauthor of the study. “Applying that standard to the Tully monster argues strongly against a vertebrate identity.” 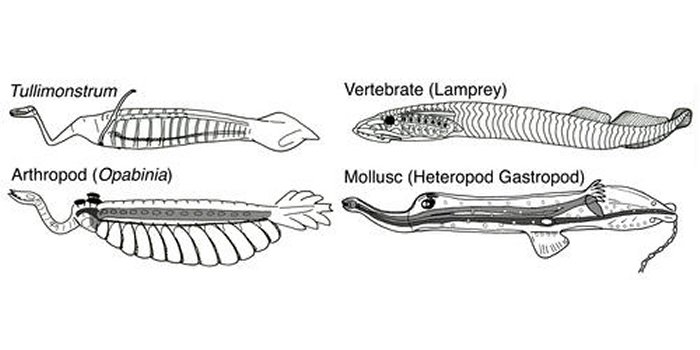 The body form of Tullimonstrum shares similarities with molluscs and arthropods; less so, vertebrates.

Based on Sallan’s and her colleagues’ examination of Tullimonstrum eyes, these creatures in fact possess what is known as a cup eye, a relatively simpler structure that lacks a lens.

“Eyes have evolved dozens of times,” Sallan said. “It’s not too much of a leap to imagine Tully monsters could have evolved an eye that resembled a vertebrate eye.”

“So, the problem is, if it does have cup eyes, then it can’t be a vertebrate because all vertebrates either have more complex eyes than that or they secondarily lost them,” Sallan said. “But lots of other things have cup eyes, like primitive chordates, molluscs and certain types of worms.”

Researchers have examined more than 1,000 Tully Monster specimens, but the identity of the weird creature still remains a mystery.