Eddie Gonzales Jr. – MessageToEagle.com – An intriguing, large galaxy dubbed Dragonfly 44 surprised astronomers, when they pointed the Dragonfly Telephoto Array at one of the densest collections of galaxies in the universe, the Coma cluster (Abell 1656), located approx. 330 million light-years from Earth. 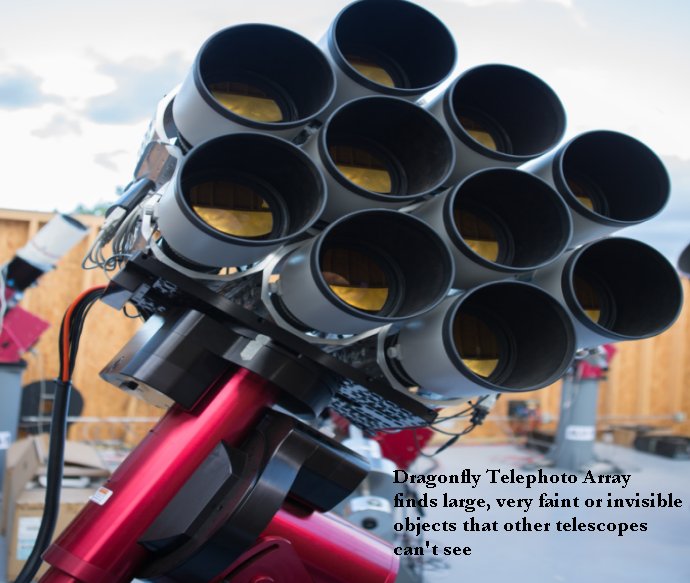 This distance is so small that the Hubble Telescope can see many of galaxies situated there, but not all.

So far, an intriguing Dragonfly 44 galaxy has escaped astronomers’ eyes because, being the size of the Milky Way, it emits 100 times less light than our galaxy.

Dragonfly Telephoto Array is a unique telescope designed to find large and very faint or invisible objects in the night sky. Such objects can’t be detected by other telescopes.

Using it, they detected 57 previously unknown galaxies in that area, but it wasn’t easy to find them because they are very faint and also spread out. 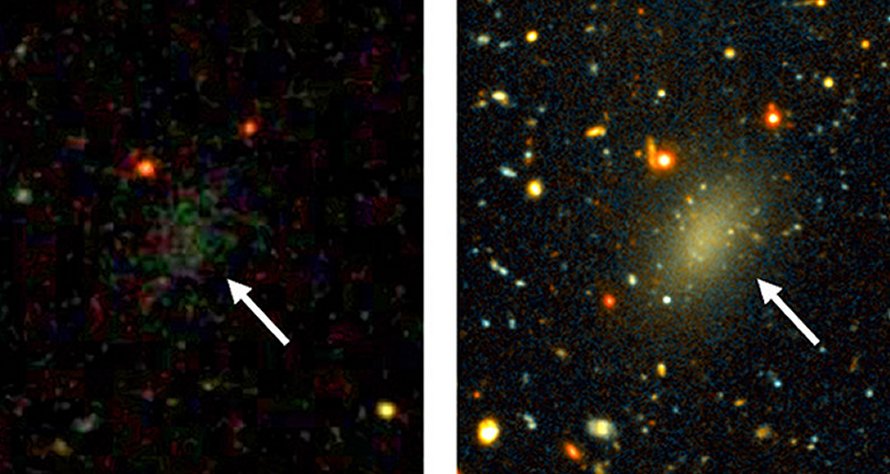 The dark galaxy Dragonfly 44. The image on the left is from the Sloan Digital Sky Survey. Only a faint smudge is visible. The image on the right is a long exposure with the Gemini telescope, revealing a large, elongated object. Dragonfly 44 is very faint for its mass and consists almost entirely of dark matter. Images by Pieter van Dokkum, Roberto Abraham, Gemini, Sloan Digital Sky Survey

One of these galaxies is very interesting and very strange.  Dubbed Dragonfly 44, is approximately the size of the Milky Way (100,000 light-years across), it probably has a mass of about one trillion solar masses, about the same as the mass of our Milky Way galaxy.

However,  this galaxy contains only 1 percent of the stars.

Astronomers say this makes no sense in connection with the current theory of galactic formation and evolution. The discovery of this galaxy surprised astronomers, and for now, they have no explanation for how such an enormous “ultra-diffuse galaxy” like Dragonfly 44 could form.

Mysterious Number 137 May Unlock Great Secrets Of The Universe

So what is lurking behind the existence of Dragonfly 44 located in the Coma cluster?

Further research has shown that the galaxy has much more to offer than can be seen at first glance. Despite its mass, Dragonfly 44 contains almost no regular matter, which is necessary to create enough gravity to keep it together. Without this matter, Dragonfly 44 (with only a few stars) would fly apart as it rotated.

It would not exist, but it does. There is ‘something’ there that helps keep the galaxy together. This ‘something’ is dark matter; Dragonfly 44 has it more than 99, 99 percent!

To determine the amount of dark matter in Dragonfly 44, astronomers used the DEIMOS instrument installed on the 10-meter Keck II telescope to measure the velocities of stars for 33.5 hours over six nights so they could determine the galaxy’s mass.

They also observed that the stars move very fast (47 kilometers per second), which indicate a huge mass of the galaxy Dragonfly 44.