Eddie Gonzales Jr. – MessageToEagle.com – Due to its peculiar shape and behavior the strange cosmic object known as Oumuamua has caused controversy ever since it was discovered back in 2017.

A Harvard scientist suggested the mysterious interstellar object may be a fully operational alien probe sent to Earth’s vicinity and it’s not the first one. Not everyone agreed with this theory and scientists are still debating whether it’s an asteroid, comet or alien artifact. 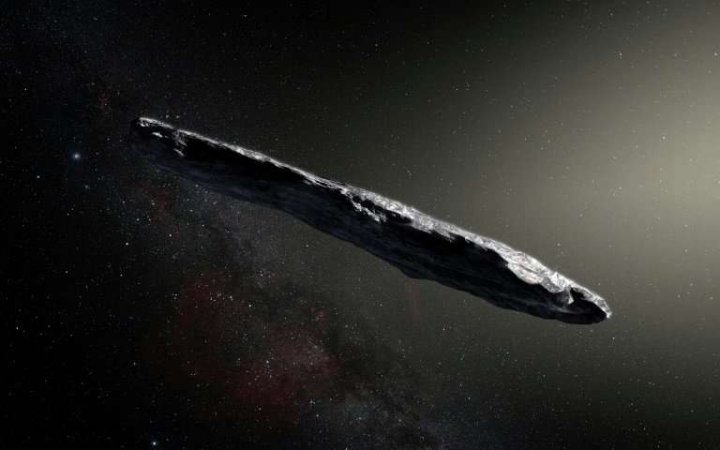 A new theory now suggests that the elongated, cigar-shaped body named ‘Oumuamua (Hawaiian for “a messenger from afar arriving first”) is not at all what we expected.

Using computer simulations, a team of researchers has an attempt to answer how Oumuamua was formed and unravel where it came from.

The conclusion is that Oumuamua may have been ripped from another planet and flung in our general direction by a distant star.

Scientists maintain that objects like ‘Oumuamua can form under the influence of tidal forces like those felt by Earth’s oceans. Their formation theory explains all of ‘Oumuamua’s unusual characteristics.

“We showed that ‘Oumuamua-like interstellar objects can be produced through extensive tidal fragmentation during close encounters of their parent bodies with their host stars, and then ejected into interstellar space,” said Douglas N. C. Lin, professor emeritus of astronomy and astrophysics at UC Santa Cruz.

Oumuamua  Is Unlike Anything Else In Our Solar System

“Oumuamua is absolutely nothing like anything else in our solar system”, according to Yun Zhang at the National Astronomical Observatories of the Chinese Academy of Sciences.

Its dry surface, unusually elongated shape, and puzzling motion even drove some scientists to wonder if it was an alien probe.

“It is really a mysterious object, but some signs, like its colors and the absence of radio emission, point to ‘Oumuamua being a natural object,” Zhang said.

“Our objective is to come up with a comprehensive scenario, based on well understood physical principles, to piece together all the tantalizing clues,” Lin said.

Astronomers had expected that the first interstellar object they detected would be an icy body like a comet. Icy objects like those populating the Oort cloud, a reservoir of comets in the outermost reaches of our solar system, evolve at very large distances from their host stars, are rich in volatiles, and are often tossed out of their host systems by gravitational interactions.

Interstellar Alien Object ‘Oumuamua: Which Of Four Dwarf Stars Is Its Home?

Cucumber-Shaped Asteroid ‘Oumuamua’ Had A Violent Past – Researchers Say

They are also highly visible due to the sublimation of volatile compounds, which creates a comet’s coma (or “tail”) when it is warmed by the sun.

Oumuamua’s dry appearance, however, is similar to rocky bodies like the solar system’s asteroids, indicating a different ejection scenario.

Other researchers have calculated that there must be an extremely large population of interstellar objects like ‘Oumuamua.

“The discovery of ‘Oumuamua implies that the population of rocky interstellar objects is much larger than we previously thought,” Zhang said. 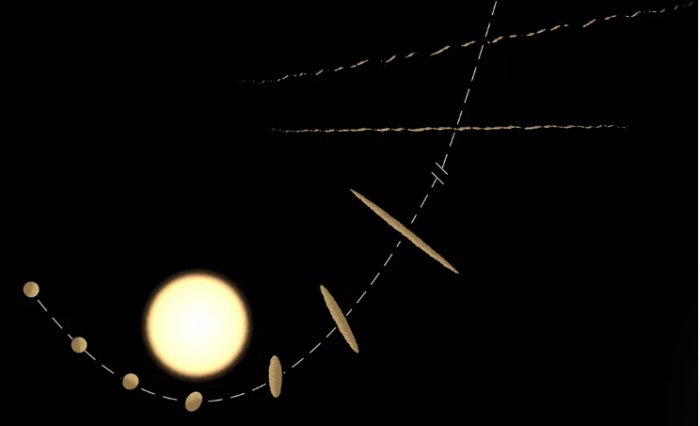 This illustration shows the tidal disruption process that can give rise to ‘Oumuamua-like objects. Credit: NAOC/Y. Zhang

“On average, each planetary system should eject in total about a hundred trillion objects like ‘Oumuamua. We need to construct a very common scenario to produce this kind of object.”

When a smaller body passes very close to a much bigger one, tidal forces of the larger body can tear the smaller one apart, as happened to comet Shoemaker-Levy 9 when it came close to Jupiter.

The tidal disruption processes can eject some debris into interstellar space, which has been suggested as a possible origin for ‘Oumuamua. But whether such a process could explain ‘Oumuamua’s puzzling characteristics remained highly uncertain.

Scientists discovered that if the object comes close enough to the star, the star can tear it into extremely elongated fragments that are then ejected into the interstellar space.

“The elongated shape is more compelling when we considered the variation of material strength during the stellar encounter. The ratio of long axis to short axis can be even larger than ten to one,” Zhang said.

“Heat diffusion during the stellar tidal disruption process also consumes large amounts of volatiles, which not only explains ‘Oumuamua’s surface colors and the absence of visible coma, but also elucidates the inferred dryness of the interstellar population,” Zhang said in a press statement. “Nevertheless, some high-sublimation-temperature volatiles buried under the surface, like water ice, can remain in a condensed form.”

Observations of ‘Oumuamua showed no cometary activity, and only water ice is a possible outgassing source to account for its non-gravitational motion. If ‘Oumuamua was produced and ejected by the scenario of Zhang and Lin, plenty of residual water ice could be activated during its passage through the solar system. The resulting outgassing would cause accelerations that match ‘Oumuamua’s comet-like trajectory.

“The tidal fragmentation scenario not only provides a way to form one single ‘Oumuamua, but also accounts for the vast population of asteroid-like interstellar objects,” Zhang said.