Conny Waters – MessageToEagle.com – For over a century, one of the earliest human fossils ever discovered in Spain has been long considered a Neandertal. However, new analysis from an international research team, including scientists at Binghamton University, State University of New York, dismantles this century-long interpretation, demonstrating that this fossil is not a Neandertal; rather, it may actually represent the earliest presence of Homo sapiens ever documented in Europe.

In 1887, a fossil mandible was discovered during quarrying activities in the town of Banyoles, Spain, and has been studied by different researchers over the past century. The Banyoles fossil likely dates to between approximately 45,000–65,000 years ago, at a time when Europe was occupied by Neandertals, and most researchers have generally linked it to this species.

“The mandible has been studied throughout the past century and was long considered to be a Neandertal based on its age and location, and the fact that it lacks one of the diagnostic features of Homo sapiens: a chin,” said Binghamton University graduate student Brian Keeling.

The new study relied on virtual techniques, including CT scanning of the original fossil. This was used to virtually reconstruct missing parts of the fossil, and then to generate a 3D model to be analyzed on the computer.

New research conducted by Professor of Anthropology Rofl Quam and graduate student Brian Keeling at Binghamton University sheds new light on the origins of a long-studied mandible fossil. The fossil was discovered in Banyoles, Spain in 1887 and was long thought to belong to a Neandertal. This new research suggests a possible Homo sapiens connection, making it the earliest recorded human presence in Europe. Credit: Binghamton University, State University of New York

The authors studied the expressions of distinct features on the mandible from Banyoles that are different between our own species, Homo sapiens, and the Neandertals, our closest evolutionary cousins.

The authors applied a methodology known as “three-dimensional geometric morphometrics” that analyzes the geometric properties of the bone’s shape. This makes it possible to directly compare the overall shape of Banyoles to Neandertals and H. sapiens.

“Our results found something quite surprising—Banyoles shared no distinct Neandertal traits and did not overlap with Neandertals in its overall shape,” said Keeling.

While Banyoles seemed to fit better with Homo sapiens in both the expression of its individual features and its overall shape, many of these features are also shared with earlier human species, complicating an immediate assignment to Homo sapiens. In addition, Banyoles lacks a chin, one of the most characteristic features of Homo sapiens mandibles.

“We were confronted with results that were telling us Banyoles is not a Neandertal, but the fact that it does not have a chin made us think twice about assigning it to Homo sapiens,” said Rolf Quam, professor of anthropology at Binghamton University, State University of New York. “The presence of a chin has long been considered a hallmark of our own species.” 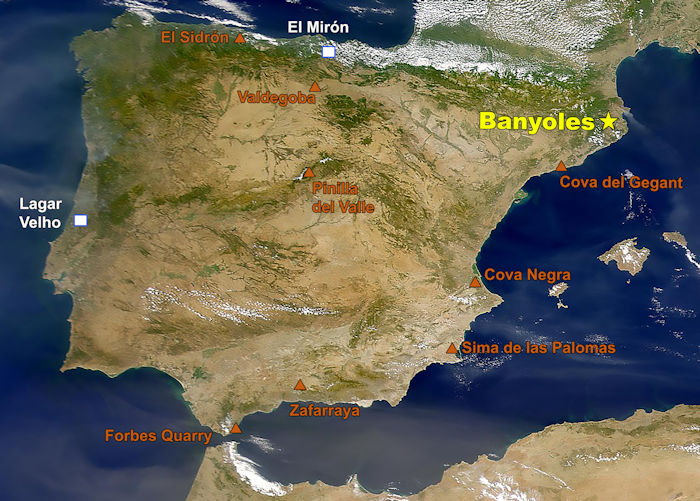 Given this, reaching a scientific consensus on what species Banyoles represents is a challenge. The authors also compared Banyoles with an early Homo sapiens mandible from a site called Peştera cu Oase in Romania.

Unlike Banyoles, this mandible shows a full chin along with some Neandertal features, and an ancient DNA analysis has revealed this individual had a Neandertal ancestor four to six generations ago. Since the Banyoles mandible shared no distinct features with Neandertals, the researchers ruled out the possibility of mixture between Neandertals and H. sapiens to explain its anatomy.

The authors point out that some of the earliest Homo sapiens fossils from Africa, predating Banyoles by more than 100,000 years, do show less pronounced chins than in living populations.

Thus, these scientists developed two possibilities for what the Banyoles mandible may represent: a member of a previously unknown population of Homo sapiens that coexisted with the Neandertals; or a hybrid between a member of this Homo sapiens group and a non-Neandertal unidentified human species. However, at the time of Banyoles, the only fossils recovered from Europe are Neandertals, making this latter hypothesis less likely.

“If Banyoles is really a member of our species, this prehistoric human would represent the earliest H. sapiens ever documented in Europe,” said Keeling.

Whichever species this mandible belongs to, Banyoles is clearly not a Neandertal at a time when Neandertals were believed to be the sole occupants of Europe.

The authors conclude that “the present situation makes Banyoles a prime candidate for ancient DNA or proteomic analyses, which may shed additional light on its taxonomic affinities.”

The authors plan to make the CT scan and the 3D model of Banyoles available for other researchers to freely access and include in future comparative studies, promoting open access to fossil specimens and reproducibility of scientific studies.

The paper, “Reassessment of the human mandible from Banyoles (Girona, Spain),” was published in the Journal of Human Evolution.