Conny Waters – MessageToEagle.com – A hieroglyph-adorned stairway leading up to a ceremonial platform has been unearthed during excavations at El Palmar, a small plaza compound in Mexico near the borders of Belize and Guatemala.

The archaeological team led by Kenichiro Tsukamoto, an assistant professor of anthropology at UC Riverside, also discovered an important Maya man buried nearly 1,300 years ago; his life was privileged and yet difficult. 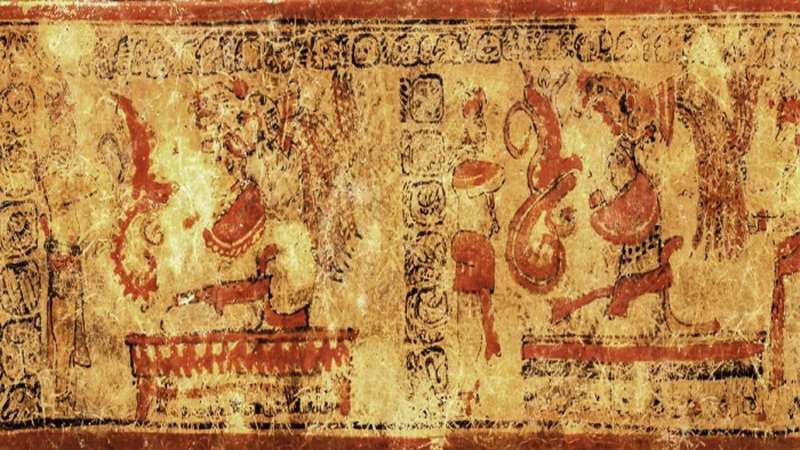 The decoration on one of the two ceramic vessels found in a non-royal elite tomb at the Maya site of El Palmar depicts seated figures wearing elaborate headdresses performing a fire ritual. (Kenichiro Tsukamoto)

The man, a diplomat named Ajpach’ Waal, suffered malnutrition or illness as a child, but as an adult, he helped negotiate an alliance between two powerful dynasties that ultimately failed. The ensuing political instability left him in reduced economic circumstances, and he probably died in relative obscurity.

“His life is not like we expected based on the hieroglyphics,” Tsukamoto said. “Many people say that the elite enjoyed their lives, but the story is usually more complex.”

The deciphered hieroglyph revealed that in June, 726 CE, Ajpach’ Waal traveled and met the king of Copán, 350 miles away in Honduras, to forge an alliance with the king of Calakmul, near El Palmar.

The inscriptions identified Ajpach’ Waal as a “lakam,” or standard-bearer, an ambassador that carried a banner as they walked on diplomatic missions between cities. He inherited this lofty position through his father’s lineage, and his mother also came from an elite family. Ajpach’ Waal must have considered this his crowning achievement. He was not given the platform by El Palmar’s ruler but had it built it for himself a few months after the mission in September, 726 CE.

The platform served as a sort of theatrical stage where spectacular rituals were performed for an audience, with only influential people able to build their own. 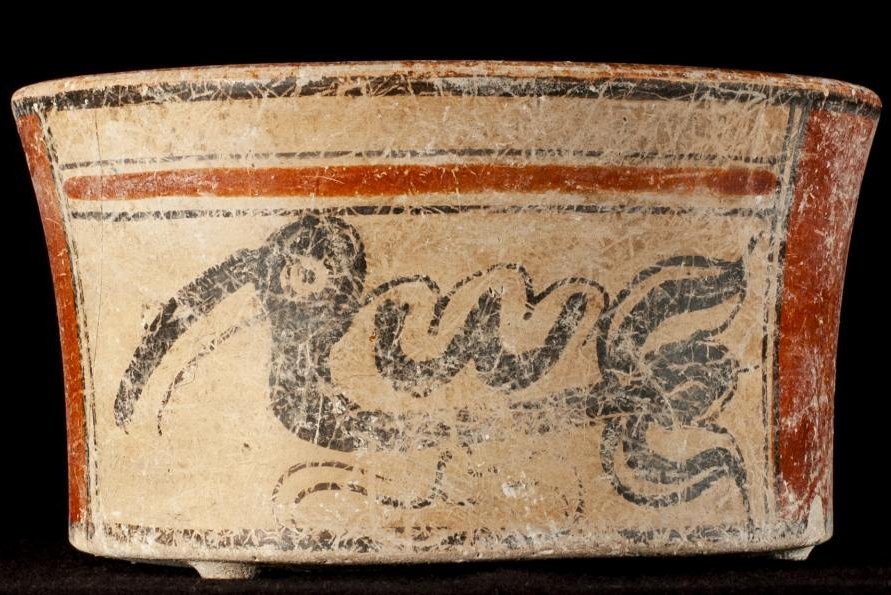 One of two vessels found in a non-royal elite Maya tomb at El Palmar depicts a cormorant-like bird. (Kenichiro Tsukamoto)

Beneath the floor of a temple next to the platform, Tsukamoto discovered the undisturbed burial of a male skeleton in a small chamber. Though interred in a location that suggested ownership of the platform and temple, unlike other elite Maya burials, only two colorfully decorated clay pots — no jewelry or other grave goods — had accompanied this individual into the underworld.

Tsukamoto and Jessica I. Cerezo-Román, an assistant professor of anthropology at the University of Oklahoma, studied the bones of the person buried in this puzzling tomb to tell his story.

….The man was between 35 and 50 years old when he died. Several dating methods, including radiocarbon, stratigraphy, and ceramic typology, suggest the burial occurred around 726 when the stairway was constructed. The high status of the individual combined with proximity to the stairway leads the authors to believe that this was probably Ajpach’ Waal himself, or possibly his father.

All his upper front teeth, from right canine to left, had been drilled to hold decorative implants of pyrite and jade, which was valuable and highly regulated. Maya living in geographic areas associated with ruling elites underwent this painful procedure during puberty as a rite of passage to mark their inclusion within a high office or social group. Ajpach’ Waal might have received such implants when he inherited his father’s title.

The skull had been mildly flattened in back from prolonged contact with something flat during infancy, which the Maya believed made a person more attractive. Because the front of the cranium was not preserved, the archaeologists could not tell if the forehead had been similarly flattened, a beautification practice limited to royalty.

Other aspects of the bones belied the privilege displayed by the dental and cranial modifications. Some of his arm bones had healed periostitis, caused by bacterial infections, trauma, scurvy, or rickets, which would have made his arm ache until the condition improved. Both sides of the skull had slightly porous, spongy areas known as porotic hyperostosis, caused by childhood nutritional deficiencies or illnesses. The condition is relatively common in burials throughout the Maya world, suggesting Ajpach’ Waal’s high status couldn’t shield him from malnutrition and disease.

A healed fracture on his right tibia, or shinbone, resembles fractures seen in modern athletes who play contact sports such as football, rugby, or soccer. This could indicate he played some of the ballgames depicted on the stairway, strengthening the case that this was Ajpach’ Waal.

Long before he died, the individual had lost many teeth on the left side of his lower jaw due to gum disease and might have had a painful abscess on his lower right premolar, all of which would have restricted his diet to soft foods. One inlaid tooth had thickened near the root in response to the injury of drilling and could have ached.

He also developed arthritis in his hands, right elbow, left knee, left ankle, and feet as he aged, which would have caused stiffness and pain, especially in the morning. Tsukamoto and Cerezo-Román suggest that his arthritis might have been caused by carrying a banner on a pole for long distances over rugged terrain and walking and up and down stairways. He would have also been required to kneel on the platforms of Maya rulers.

As if these maladies weren’t enough, fate conspired to change Ajpach’ Waal’s fortunes.

“The ruler of a subordinate dynasty decapitated Copán’s king 10 years after his alliance with Calakmul, which was also defeated by a rival dynasty around the same time,” Tsukamoto said. “We see the political and economic instability that followed both these events in the sparse burial and in one of the inlaid teeth.”

The archaeologists determined that the inlay in Ajpach’ Waal’s right canine tooth had fallen out and was not replaced before his death because dental plaque had hardened into calculus in the cavity. The hole, easily visible when the man smiled or spoke, would have been an embarrassing, public admission of hardship or El Palmar’s reduced significance. This also would have made him a less useful emissary if he still occupied the role.

Though people continued living at El Palmar for some time after Ajpach’ Waal’s death, it was eventually abandoned and reclaimed by the jungle.