Eddie Gonzales Jr. – MessageToEagle.com – Pterosaurs, the flying reptiles of the dinosaur era, originated in the Late Triassic (227 million years ago) and became extinct at the end-Cretaceous extinction event (66 million years ago). With wing spans ranging from 1 to 12 meters, they dominated the world’s skies for more than 160 million years. 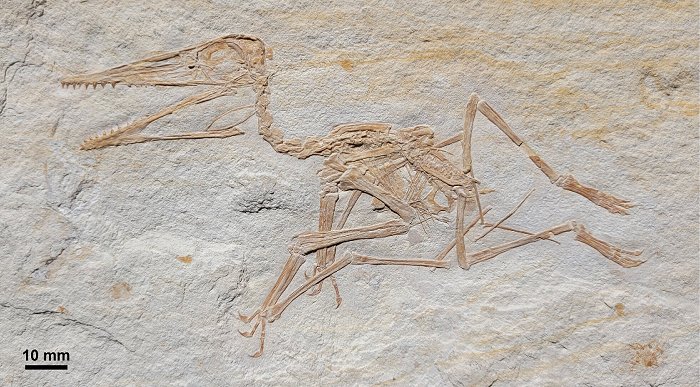 The first described and named pterosaur—and namesake of the whole group—is Pterodactylus from the famous Solnhofen Limestone of Bavaria, southern Germany. Originally described in 1784 by the Italian naturalist Cosimo Alessandro Collini, the fossil was considered to be an aquatic animal for 25 years, before Georges Cuvier found out it was a flying reptile belonging to a new, previously unrecognized group.

The oldest specimen of this iconic pterosaur was recently found near Painten, a small town in the southern part of the Franconian Alb in central Bavaria. The fossil, described in a study in the journal Fossil Record, is about one million years older than other Pterodactylus specimens.

The specimen was unearthed in 2014 during excavations in an active limestone quarry. It took more than 120 hours of meticulous mechanical work using pneumatic tools and needles before the researchers could study it. The research team behind the discovery are Felix Augustin, Andreas Matzke, Panagiotis Kampouridis and Josephina Hartung from the University of Tübingen (Germany) and Raimund Albersdörfer from the Dinosaurier Museum Altmühltal (Germany). 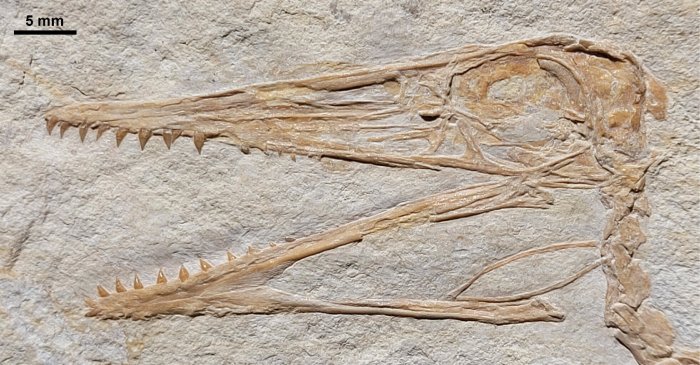 “The rocks of the quarry, which yielded the new Pterodactylus specimen, consist of silicified limestone that has been dated to the upper Kimmeridgian stage (around 152 million years ago)”, explains Felix Augustin of the University of Tübingen, who is the lead author of the study. “Previously, Pterodactylus had only been found in younger rocks of southern Germany belonging to the Tithonian stage that follows after the Kimmeridgian.”

The specimen is a complete, well-preserved skeleton of a small-sized individual. “Only a very small portion of the left mandible as well as of the left and right tibia is missing. Otherwise, the skeleton is nearly perfectly preserved with every bone present and in its roughly correct anatomical position,” the researchers write in their study.

With a 5-cm-long skull, the Painten Pterodactylus represents a rare “sub-adult” individual.

“Generally, the Pterodactylus specimens are not evenly distributed across the full size range but predominantly fall into distinct size-classes that are separated by marked gaps. The specimen from Painten is a rare representative of the first gap between the small and large sizes,” explains Augustin.

“The Painten Pterodactylus was of an intermediate, and rarely found, ontogenetic age at the time of its death, between two consecutive year-classes.”

The Painten quarry has yielded many other “exquisitely preserved fossils,” including ichthyosaurs, turtles, marine and terrestrial crocodile-relatives, and dinosaurs. Many of them, like this new pterosaur specimen, are on display in the new Dinosaurier Museum Altmühltal in Denkendorf (Bavaria, Germany).