Before departing for Earth on May 10, the OSIRIS-REx spacecraft will perform a final flyby of Bennu—capturing its last images of sample collection site Nightingale to look for transformations on Bennu’s surface after the Oct. 20, 2020, sample collection event. 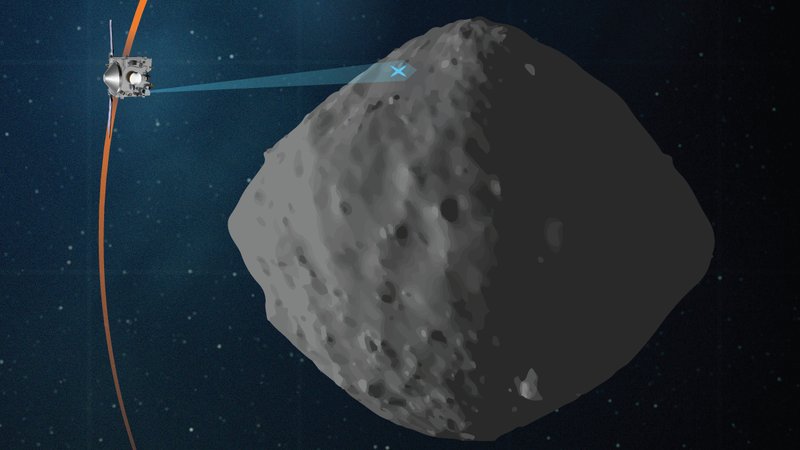 This artist’s concept shows the planned flight path of NASA’s OSIRIS-REx spacecraft during its final flyby of asteroid Bennu, scheduled for April 7. Credits: University of Arizona

The OSIRIS-REx mission team recently completed a detailed safety analysis of a trajectory to observe sample site Nightingale from a distance of approximately 2.4 miles (3.8 kilometers). The spacecraft’s flight path is designed to keep OSIRIS-REx a safe distance from Bennu, while ensuring the science instruments can collect precise observations. The single flyby will mimic one of the observation sequences conducted during the mission’s Detailed Survey phase in 2019. OSIRIS-REx will image Bennu for a full 4.3-hour rotation to obtain high-resolution images of the asteroid’s northern and southern hemispheres and its equatorial region. The team will then compare these new images with the previous high-resolution imagery of Bennu obtained during 2019.

This final flyby of Bennu was not part of the original mission schedule, but the observation run will provide the team an opportunity to learn how the spacecraft’s contact with Bennu’s surface altered the sample site. Bennu’s surface was considerably disturbed after the Touch-and-Go (TAG) sample collection event, with the collector head sinking 1.6 feet (48.8 centimeters) into the asteroid’s surface while firing a pressurized charge of nitrogen gas. The spacecraft’s thrusters also mobilized a substantial amount of surface material during the back-away burn.

During this new mission phase, called the Post-TAG Observation (PTO) phase, the spacecraft will perform five separate navigation maneuvers in order to return to the asteroid and position itself for the flyby. OSIRIS-REx executed the first maneuver on Jan. 14, which acted as a braking burn and put the spacecraft on a trajectory to rendezvous with the asteroid one last time.

Since October’s sample collection event, the spacecraft has been slowly drifting away from the asteroid and ended up approximately 1,635 miles (2,200 km) from Bennu. After the braking burn, the spacecraft is now slowly approaching the asteroid and will perform a second approach maneuver on Mar. 6, when it is approximately 155 miles (250 km) from Bennu. OSIRIS-REx will then execute three subsequent maneuvers, which are required to place the spacecraft on a precise trajectory for the final flyby on Apr. 7.

OSIRIS-REx is scheduled to depart Bennu on May 10 and begin its two-year journey back to Earth. The spacecraft will deliver the samples of Bennu to the Utah Test and Training Range on Sep. 24, 2023.