Eddie Gonzales Jr. – MessageToEagle.com – It may still be decades before quantum computers are ready to solve problems that today’s classical computers aren’t fast or efficient enough to solve.

However, engineers at Purdue University and Tohoku University in Japan have built the first hardware to demonstrate how the fundamental units of what would be a probabilistic computer – called p-bits – are capable of performing a calculation that quantum computers would usually be called upon to perform. 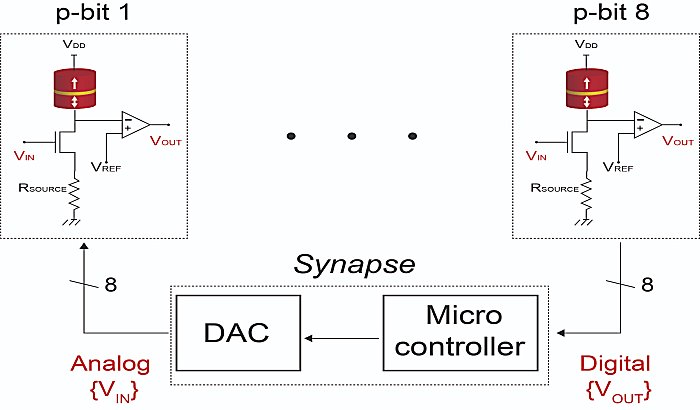 A device serves as a basis for building probabilistic computers to more efficiently solve problems in areas such as drug research, encryption and cybersecurity, financial services, data analysis, and supply chain logistics.

Today’s computers store and use information in the form of zeroes and ones called bits. Quantum computers use qubits that can be both zero and one at the same time.

“There is a useful subset of problems solvable with qubits that can also be solved with p-bits. You might say that a p-bit is a ‘poor man’s qubit,’” Supriyo Datta, the university’s Thomas Duncan Distinguished Professor of Electrical and Computer Engineering said in a press release.

Whereas qubits need really cold temperatures to operate, p-bits work at room temperature like today’s electronics, so existing hardware could be adapted to build a probabilistic computer, the researchers say.

The team built a device that is a modified version of magnetoresistive random-access memory, or MRAM, which some types of computers use today to store information. The technology uses the orientation of magnets to create states of resistance corresponding to zero or one.

In the next step, they altered an MRAM device, making it intentionally unstable to better facilitate the ability of p-bits to fluctuate. Purdue researchers combined this device with a transistor to build a three-terminal unit whose fluctuations could be controlled. Eight such p-bit units were interconnected to build a probabilistic computer.

The circuit successfully solved what is often considered a “quantum” problem: Breaking down, or factoring, numbers such as 35,161 and 945 into smaller numbers, a calculation known as integer factorization.

These calculations are well within the capabilities of today’s classical computers, but the researchers believe that the probabilistic approach demonstrated in this paper would take up much less space and energy.