Conny Waters – MessageToEagle.com – The population on Rapa Nui didn’t crash because the Europeans came. Nor did they live in idyllic equilibrium with nature for centuries. 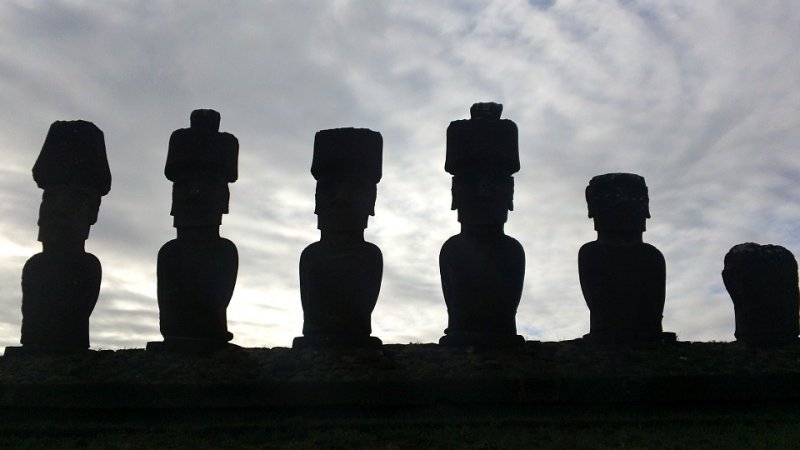 Rapa Nui—also known as Easter Island—is one of the most remote inhabited islands in the world. The island is also surrounded by several myths, legends and narratives, not least because of the secretive monumental statues, called moai, carved between the years 1250 and 1500. Norwegian explorer Thor Heyerdahl’s Kon-Tiki expedition in 1947 also draw a lot of attention towards Rapa Nui.

An interdisciplinary group with 11 scientists from Chile, Spain and Norway has now delivered a strong rebuttal of some of the narratives concerning Rapa Nui and the island’s population.

Nobody knows exactly when the first humans settled on Rapa Nui, but some historians believe that a small group of Polynesian settlers arrived already around 800 to 900 A.D. On the other end of the scale, everybody agrees that Rapa Nui was populated around 1200 A.D.

From then on, the settlers on Rapa Nui went through a succession of crises. The new study shows that the crises were linked to the long-term effects of climate change on the capacity for food production on the island.

Paleobotanical studies indicate that the island was forested when the first settlers arrived, with a range of trees, shrubs, ferns, and grasses. However, land clearing for cultivation and the introduction of the Polynesian rat led to gradual deforestation, so that Rapa Nui today is mostly covered in grassland.

“The history of the population of Rapa Nui history has been quite controversial, and there have been two big hypotheses about its development. One of them is the ecocide hypothesis, stating that the population once suffered a big collapse because they overexploited the natural resources on the island. The other hypothesis is that a collapse occurred after the Europeans came to the island. Our research show that neither of these hypotheses are correct,” says Professor Mauricio Lima from University Católica de Chile in Santiago.

“There is also a myth about the population on Rapa Nui living in an idyllic equilibrium with nature for centuries. That is not true either,” says Professor Nils Chr. Stenseth from the University of Oslo, Norway.

A more detailed study shows that the islanders on Rapa Nui suffered at least three societal crises during the centuries after colonization. The first crisis is dated to 1450-1550, during the Little Ice Age. A less apparent decline occurred between the arrival of the first Europeans in 1772 and 1774, for reasons still unknown. There was also a crisis during the nineteenth century, due to the introduction of epidemic diseases and the slave trade. Therefore: No idyllic equilibrium, and no single big crash in the population.

Mauricio Lima and Nils Chr. Stenseth wanted to take a closer look at the rise and fall of the population on Rapa Nui, because they suspected that there was a lesson to be learned. And they were right. First, they gathered a lot of available data from earlier studies of archeological sites, variations in the Pacific climate, changes in the population size through the centuries, changes in forestation and agricultural practices on the island, and so on. 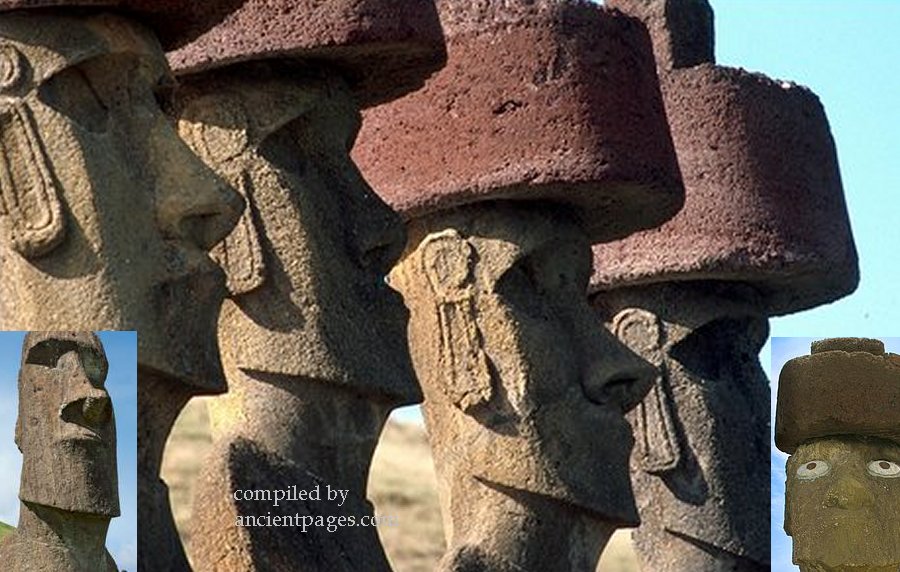 Then, they integrated all the data into a scientific model based on the classical population ecology theory.

“We have used this model several times before when we wanted to identify the reasons behind the changes in populations of other animal species like small rodents or fish species. This was a small human population on a small island with limited resources, and it seemed obvious that the model could produce interesting results,” professor Stenseth says to Titan.uio.no.

“In order to understand what is going to happen with a population at a future point in time, you have to know what happened before,” he adds.

When Stenseth and Lima used their model and theories to analyze the data from Rapa Nui, the conclusion soon became quite clear.

“The demographic declines of the Rapa Nui are linked to the long-term effects of climate change on the island’s capacity for the production of food,” explains Mauricio Lima.

They were struggling to survive

The researchers and their scientific report describe how a small and fluctuating population struggled for survival on a small and remote island in the Pacific Ocean, in an environment that was—and is—constantly changing. This area is strongly affected by the El Niño–Southern Oscillation(ENSO), which is an irregularly periodic variation in winds and sea surface temperatures over the tropical eastern Pacific Ocean.

The warming phase of the sea temperature is known as El Niñoand the cooling phase as La Niña. The new report shows that Rapa Nui is most sensitive to cold ENSO phases—La Niña—which leads to decreased rainfall over the island. This in turn reduces the overall capacity for food production on the island.

“We did not find traces of an idyllic equilibrium with nature, and we did not find traces of a huge collapse. Instead, we found traces of interactions between three factors: Climate change, human population size, and changes in the ecosystem. The climate change manifests itself as a long-term pattern of changes in rainfall over some 400 years. The population grew during this same period, and the islanders also increased and changed their use of natural resources and agricultural methods,” Lima explains.

This explains why there was no “idyllic equilibrium” on Rapa Nui: It is difficult to achieve an equilibrium when the natural surroundings are constantly changing.

Nils Chr. Stenseth and Mauricio Lima agree that the people on Rapa Nui were well aware of the ongoing changes in climate and ecology and the need to adapt. 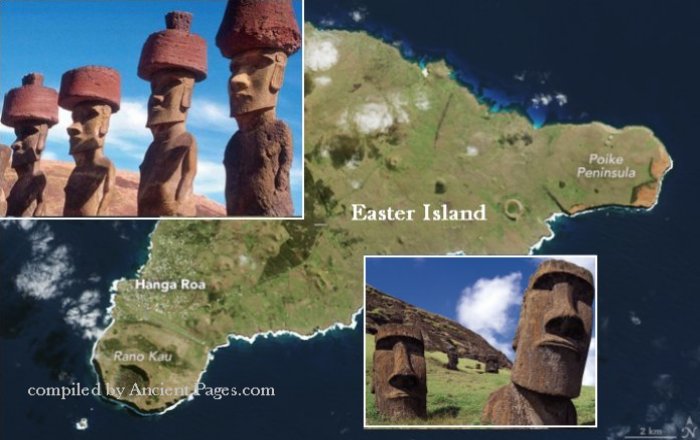 “My view is that the islanders were not only aware of the changes, but they were also able to change the way the lived on the island. They gradually changed from the quite complex society that raised the marvelous moai statues, to a later and simpler agrarian society with reduced family sizes and a new way of producing food in stone gardens,” says Lima.

Both Mauricio Lima and Nils Chr. Stenseth emphasize that their new results are not relevant only for Rapa Nui. Similar things happened on a lot of other islands in Polynesia. But the importance does not stop there:

“These three factors affected the population on Rapa Nui, and they are also important on a global scale. We studied Rapa Nui and its history because we are trying to understand what is happening with the planet. Everybody talks about climate change and the resulting problems, but very few people are talking about the rising global population and the problems it causes,” Lima adds.

“I completely agree with Mauricio. The human population on Planet Earth is under the influence of ecological processes, just like any other animal species in a limited environment,” adds Nils Chr. Stenseth.

Professor Stenseth admits that the researchers behind this new report are stepping into the middle of scientific controversy.

“In the past, many scientists working on this subject from an archeological or sociological point of view have had a tendency to ignore nature, to ignore ecological processes. We have in fact witnessed a fragmentation inside science, because ecologists and historians/archeologists have been living in different worlds. What we did in this paper was to bring together different competences, both archeologists and ecologists, in order to develop a deeper understanding. That is the main message from this work,” Stenseth insists.

“This is very true. The interdisciplinary approach is necessary for understanding Rapa Nui—and the world we live in,” Lima adds.

Thor Heyerdahl as an inspiration

The first recorded European contact with Rapa Nui happened in 1722 when Dutch navigator Jacob Roggeveenarrived with three ships on April 5—Easter Sunday. The Dutch sailors immediately started to use Easter Island as a name, and this stuck until long after Thor Heyerdahl arrived in 1948. In recent years, the island is usually called by the name used by the indigenous population.

Today, Rapa Nui is famous at least partly because of Heyerdahl—even if he is no longer considered as the best of scientists. But he was a great storyteller and thus served as an inspiration to both Mauricio Lima and Nils Chr. Stenseth.

“Thor Heyerdahl is almost a household name also in my home country, and I remember reading some of his books when I was a teenager and finding them very exciting. Later on, I more or less forgot about Heyerdahl when I started to study biology and ecology. I did not think much about him until Nils asked me about gathering data from archeological sites at Rapa Nui a few years ago. Then, it all came back to me,” recounts Professor Lima.

source – University of Oslo via Physorg