Conny Waters – MessageToEagle.com – A six-foot-tall statue of a female figure who may represent an elite woman rather than a goddess, or some mixture of the two, has been accidentally unearthed in a citrus grove near Mexico’s Gulf coast. 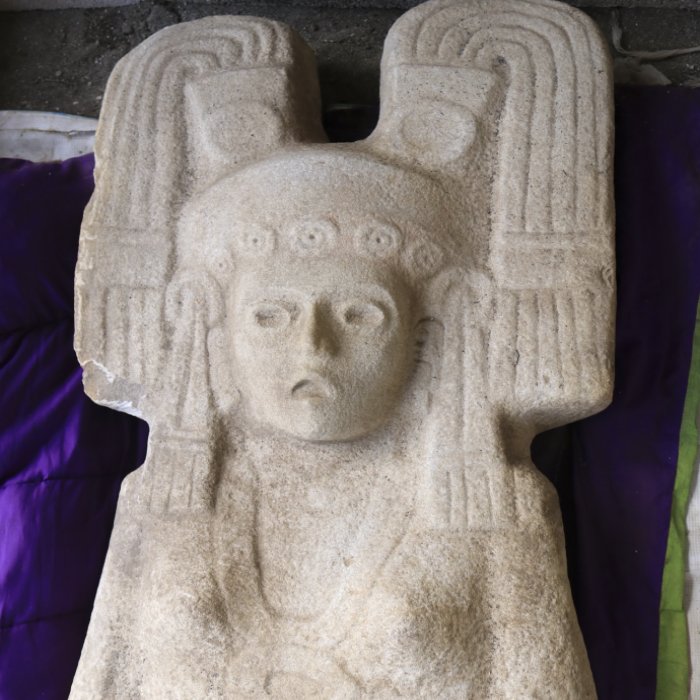 According to experts, the statue found by Mexican farmers could be a ruler or a mix of the goddess and elite woman. Image credit: Mexico’s National Institute of Anthropology (INAH) photo via AP)

The National Institute of Anthropology and History said it was the first such statue found in a region known as the Huasteca.

The ancient people inhabiting this particular region were known as Huastec civilization representing one of the pre-Columbian Mesoamerican cultures. Archaeological remains suggest the civilization, dates back to approximately the 10th century BC, although their most flourishing period is considered to be the Postclassic era between the fall of Teotihuacan and the rise of the Aztec Empire.

The Pre-Columbian Huastecs constructed temples on step-pyramids carved independently standing sculptures and produced elaborately painted pottery. They were admired for their abilities as musicians by other Mesoamerican peoples.

As to the discovered female statue, it has an elaborate hairpiece and marks of status, and may date to around 1450 to 1521, the institute said. While the site where it was found is nearer to the pre-Hispanic ruin site of El Tajín, the statue shows some influences of the Aztecs.

Farmers digging in the grove found it on New Year’s Day and quickly reported it to authorities. The area where it was found was not previously known to be an archeological site, and the stone statue may have been moved from some unknown original site.

Just who the open-mouthed, wide-eyed statue depicts remains something of a mystery, 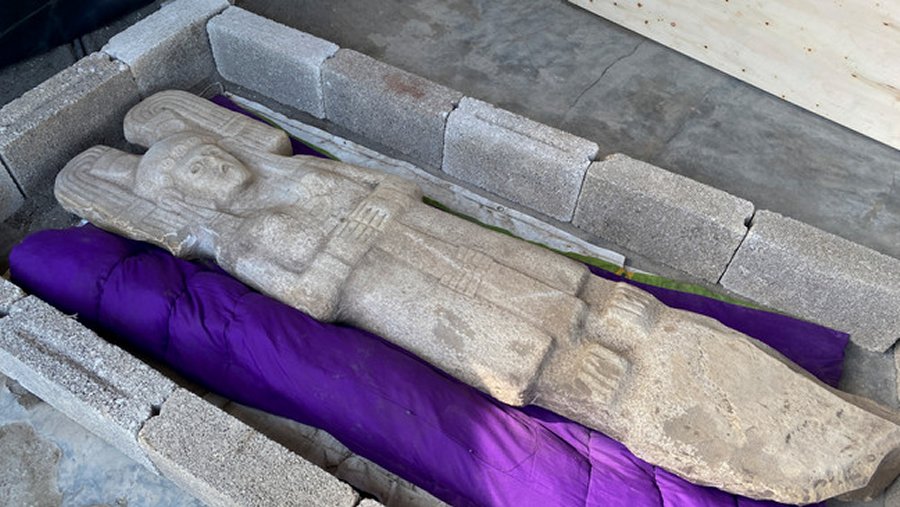 The statue of a female figure unearthed in Hidalgo Amajac, is seen in nearby Alamo Temapache, Veracruz state, Mexico. Image credit: Mexico’s National Institute of Anthropology (INAH) photo via AP)

According to Institute archaeologist, María Eugenia Maldonado Vite this could be a ruler, based on her posture and attire, more than a goddess. She also added that it could be “a late fusion between the Teem goddesses and women of high political or social status in the Huasteca.” Those goddesses were part of a fertility cult.”, writes AP.

Susan Gillespie, an anthropology professor at the University of Florida, said there “there are quite a few pre-Hispanic depictions of elite women and female rulers elsewhere, best known among the Classic Maya but also in Classic Zapotec bas-reliefs and Postclassic Mixtec codices.”

“Colonial-era Aztec documents mentioned women ‘rulers’ or at least holders of the crown to pass on to their successors … so that is not a surprise,” Gillespie added. “Women were highly valued in the pre-Hispanic era, drastically losing their status only after the conquest.”

However, she noted that “if there is only one such find, it’s hard to say whether it is significant or even correctly identified. Archaeology works best with repeated occurrences, to show a pattern.”

In 1994 in the Mayan ruin site of Palenque, archaeologists found the tomb of a woman dubbed The Red Queen because of the red pigment covering her tomb. But it has never been firmly established that the woman, whose tomb dates from between 600 and 700 A.D., was a ruler of Palenque.