Eddie Gonzales Jr. – MessageToEagle.com – Researchers from Skoltech and the University of Southampton, U.K., used all-optical methods to create an artificial lattice whose nodes house polaritons — quasiparticles that are half-light and half-matter excitations in semiconductors.

This so-called Lieb lattice, which usually does not occur in nature, enabled the team to demonstrate breakthrough results important for condensed matter physics. 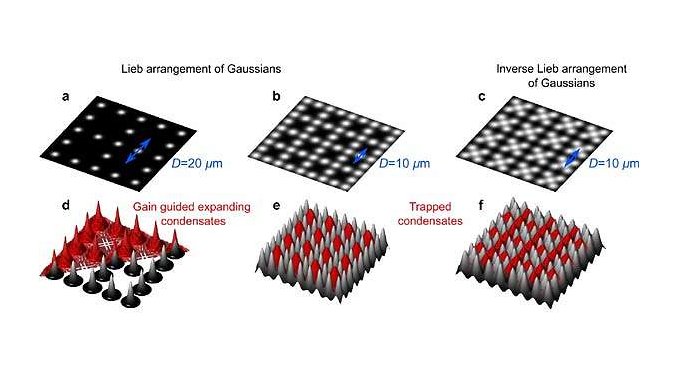 From the application’s perspective, the laser-generated polariton lattice, reported in Nature Communications, can be used for the design of next-generation devices like optical computers reliant on dispersion management and guiding light.

In the strong light-matter coupling regime, electronic excitations in a semiconductor placed between two mirrors that form a microcavity become strongly influenced by the photons trapped within. This gives rise to new quantum modes called exciton-polaritons, or just polaritons for short. They enable the study of hybrid matter-wave and photonic phenomena at the microscale. Under the right conditions, polaritons can form coherent many-body states of matter similar to Bose-Einstein condensates, providing access to exotic dissipative nonlinear dynamics.

The researchers decided to explore how these condensates behave in artificial optical lattices not usually found in nature. For this they used a programmable spatial light modulator to shape a laser beam into a lattice inside the cavity, not unlike the laser pointer caps for projecting fancy patterns on distant surfaces. The generated polaritons both increased in number and became more energetic where the laser field was most intense. At high enough laser power, the polaritons started forming condensates that resided on the potential maxima of the lattice. In this so-called ballistic regime, high-energy polariton waves escaping the condensates scattered and diffracted across the lattice.

The researchers observed that when the lattice constant was decreased, the condensates underwent a phase transition from the ballistic regime to the opposite case of deeply trapped condensates now residing in the potential minima of the lattice. At intermediate lattice constants, the system seemed unable to “decide” whether the polariton waves should be delocalized or localized, and instead the condensates fractured across multiple energies. Such a transition had never been observed previously in polariton lattices.

The researchers then went on to demonstrate that they could produce one of the most exotic features in solid-state physics — completely dispersionless crystal bands, also known as flatbands — where particle mass becomes effectively infinite. For this they designed an optical Lieb lattice, not conventionally found in nature, which is known to possess flatbands.

The study reported in this story was co-authored by young researchers from the Hybrid Photonics Lab led by Professor Pavlos Lagoudakis, who provided the following comment on the team’s findings: “Our lab has developed great expertise in optical lattices of polariton condensates, and with this work we have taken one more step forward. These results will be of great interest to a broad scientific community spanning nonlinear optics, condensed matter physics, cold atoms, light-matter physics, and polaritonics. This is the first demonstration of nontrivial phases of matter and flatband engineering in optically generated polariton lattices. Previously, flatband states in polariton systems had only been shown in lithographically written structures.”

The first author of the paper, experimental physicist Dr. Sergey Alyatkin from Skoltech, and his colleague, theoretical physicist Dr. Helgi Sigurdsson from the University of Southampton, added: “Our work is a very nice demonstration of the advancements in optical control and richness in the field of polaritonics. The more we study microcavity polaritons in lattices, the more interesting effects we observe. Our latest results have opened a route to unexplored physics of nonstationary lattice mixtures of matter-wave quasiparticles, and we are not confining ourselves to a specific type of investigated lattice.”