Eddie Gonzales Jr. – MessageToEagle.com – We know how much dark energy there is because we know how it affects the universe’s expansion. We also know that approximately 68% of the universe is dark energy. 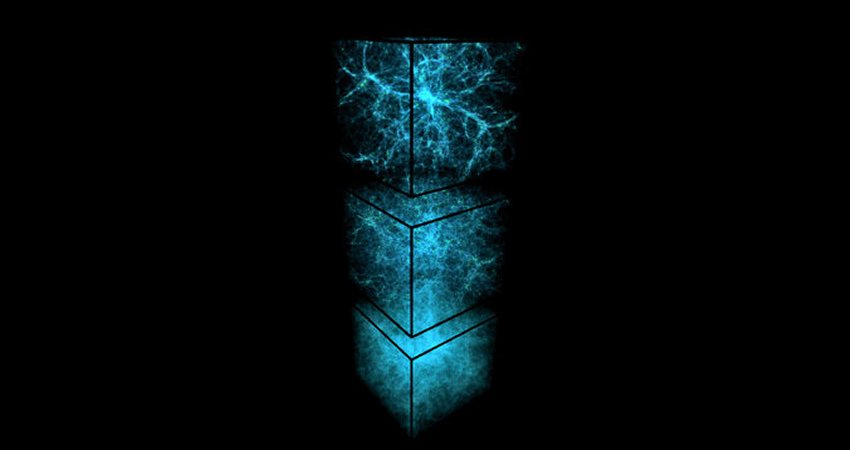 The universe is 7% of its current age at the bottom, 24% in the middle, and the universe today is displayed at the top. Credit: Volker Springel and the Max-Planck-Institute for Astrophysics

Dark matter makes up about 27%. The rest – everything on Earth, everything ever observed with all of our instruments, all normal matter – adds up to less than 5% of the universe. Other than that, it is a complete mystery.

A team of researchers at the University of Hawai’i at Mānoa have made a novel prediction—the dark energy responsible for this accelerating growth comes from a vast sea of compact objects spread throughout the voids between galaxies.

In the mid-1960s, physicists suggested that collapsing stars should not form true black holes, but should instead create Generic Objects of Dark Energy (GEODEs).

Unlike black holes, GEODEs do not ‘break’ Einstein’s equations with singularities.

Instead, a spinning layer surrounds a core of dark energy. Viewed from the outside, GEODEs and black holes appear mostly the same, even when the “sounds” of their collisions are measured by gravitational-wave observatories.

“This becomes a problem if you want to explain the accelerating expansion of the universe,” UH Mānoa Department of Physics and Astronomy research fellow Kevin Croker, lead author of the study said in a press release.

“Even though we proved last year that GEODEs, in principle, could provide the necessary dark energy, you need lots of old and massive GEODEs. If they moved like black holes, staying close to visible matter, galaxies like our own Milky Way would have been disrupted.”

The new study shows that the spinning layer around each GEODE determines how they move relative to each other. If their outer layers spin slowly, GEODEs clump more rapidly than black holes.

This is because GEODEs gain mass from the growth of the universe itself. For GEODEs with layers that spin near the speed of light, however, the gain in mass becomes dominated by a different effect and the GEODEs begin to repel each other.

“The dependence on spin was really quite unexpected. If confirmed by observation, it would be an entirely new class of phenomenon,” said Farrah.

The team solved Einstein’s equations under the assumption that many of the oldest stars, which were born when the universe was less than 2 percent of its current age, formed GEODEs when they died.

As these ancient GEODEs fed on other stars and abundant interstellar gas, they began to spin very rapidly. Once spinning quickly enough, the GEODEs’ mutual repulsion caused most of them to ‘socially distance’ into regions that would eventually become the empty voids between present-day galaxies.

This study supports the position that GEODEs can solve the dark energy problem while remaining in harmony with different observations across vast distances.