MessageToEagle.com – This enormous crater has left scientists scratching their heads after its discovery in northern Siberia.

While the exact size of the crater is yet to be measured, the pilots believe it is wide enough to hold several Mi-8 helicopters inside.
At first scientists thought this unusual and rare geographical occurrence, which was 262ft wide, was caused by a meteorite. However, based on recent examinations scientists are now suggesting the mysterious crater was caused by rising temperatures in the area and not a meteorite. 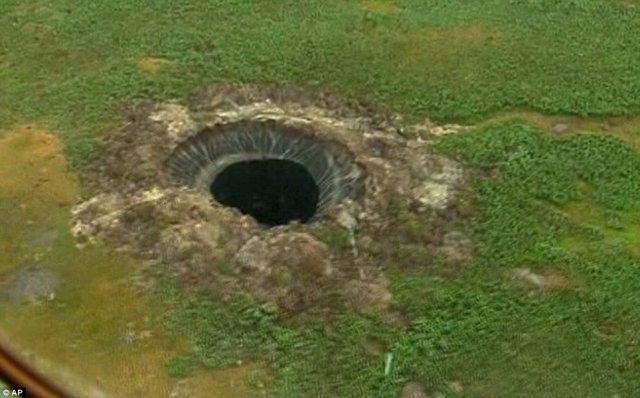 According to Andrei Plekhanov, a senior researcher at the Scientific Research Center of the Arctic the giant hole which appeared in the gas-rich area earlier this week was most likely the result of a ‘build-up of excessive pressure’ underground, due to the region’s changing temperatures.
On Wednesday, Mr Plekhanov traveled to the 262ft wide crater, in the Yamal Peninsula of northern Russia, to study how the crater was formed.

Mr Plekhanov said the giant crater appears to be made up of 80 per cent ice which adds to the theory that it was caused by the effects of global warming. 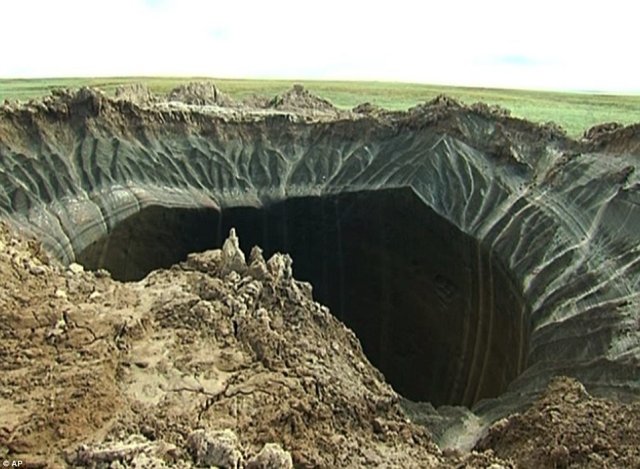 The discovery eliminates the possibility that a meteorite had struck the region – the name of which translates as ‘the end of the world’. After the hole was discovered, there was speculation online about the crater indicating ‘the arrival of a UFO craft’.
Experts said the cause is more likely to be global warming releasing gases under the surface, which then explode like a Champagne cork. The darkening around the inner rim of the crater indicates ‘severe burning’ which scorched its edges, they say. According to Daily Mail, scientists took samples of soil, air and water from the scene and were accompanied by a specialist from Russia’s Emergencies Ministry.
Anna Kurchatova from the Sub-Arctic Scientific Research Centre, thinks the crater was formed by a mixture of water, salt and gas igniting an underground explosion, a result of global warming.

Global warming may have caused an ‘alarming’ melt in the under-soil ice, released gas and causing an effect like the popping of a Champagne bottle cork, Ms Kurchatova suggests. 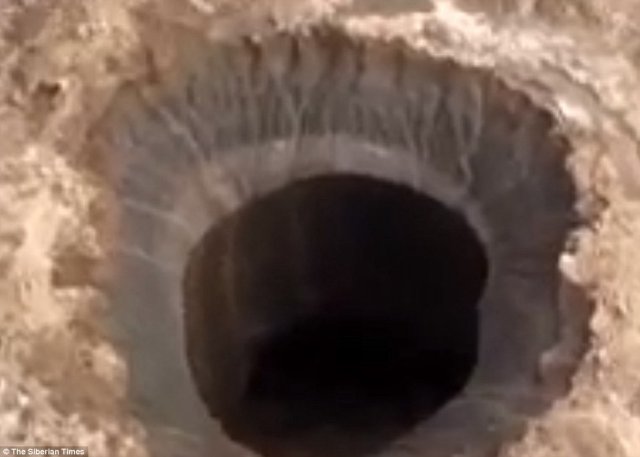 Speaking to The Sydney Morning Herald, University of New South Wales polar scientist Chris Fogwill said the hole is most likely to be a geological phenomenon called a “pingo” – a collapsed one. A pingo is a mound of earth-covered ice, usually found in the Arctic and subarctic areas.

“This is obviously a very extreme version of that, and if there’s been any interaction with the gas in the area, that is a question that could only be answered by going there,” said Fogwill.

This is by no means the first giant hole that has appeared out of nowhere. In MessageToEagle.com’s article Do Gateways To The Underworld Open? we saw how dangerous mystery holes or sinkholes tend to appear suddenly in different places on our planet. No one knows when and where it suddenly opens. Recently many mysterious holes have been reported worldwide.
Some years ago, we saw incredible images clearly showing how a giant sinkhole in Sweden was expanding.

The enormous crater in Siberia has naturally caused a lot of stir and speculation in the region. “What can we expect next?”, many now ask.