Eddie Gonzales Jr. – MessageToEagle.com – Forming planets are one possible explanation for the rings and gaps observed in disks of gas and dust around young stars. But this theory has trouble explaining why it is rare to find planets associated with rings. New supercomputer simulations show that after creating a ring, a planet can move away and leave the ring behind.

Not only does this bolster the planet theory for ring formation, the simulations show that a migrating planet can produce a variety of patterns matching those actually observed in disks. 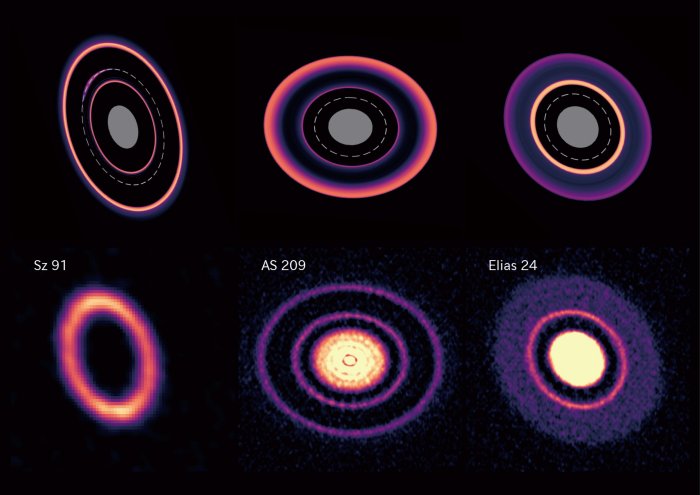 Young stars are encircled by protoplanetary disks of gas and dust. One of the world’s most powerful radio telescope arrays, ALMA (Atacama Large Millimeter/submillimeter Array), has observed a variety of patterns of denser and less dense rings and gaps in these protoplanetary disks. Gravitational effects from planets forming in the disk are one theory to explain these structures, but follow-up observations looking for planets near the rings have largely been unsuccessful.

In this research a team from Ibaraki University, Kogakuin University, and Tohoku University in Japan used the world’s most powerful supercomputer dedicated to astronomy, ATERUI II at the National Astronomical Observatory of Japan, to simulate the case of a planet moving away from its initial formation site. Their results showed that in a low viscosity disk, a ring formed at the initial location of a planet doesn’t move as the planet migrates inwards.

These results help explain why planets are rarely observed near the outer rings, and the three phases identified in the simulations match well with the patterns observed in actual rings. Higher resolution observations from next-generation telescopes, which will be better able to search for planets close to the central star, will help determine how well these simulations match reality.