Eddie Gonzales Jr. – MessageToEagle.com – Astronomers have measured how much dark matter there is around galaxies, and have found that it varies between 10 and 300 times the quantity of visible matter. 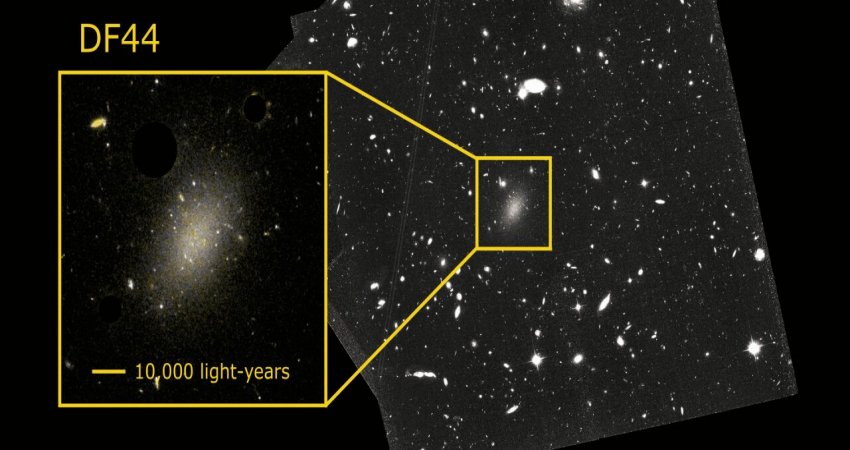 Image and amplification (in color) of the ultra-diffuse galaxy Dragonfly 44 taken with the Hubble space telescope. Credit: Teymoor Saifollahi and NASA/HST.

Now, astronomers led by the Kapteyn Institute of the University of Groningen (the Netherlands),  the Instituto de Astrofísica de Canarias (IAC), and the University of La Laguna (ULL), have found that the total number of globular clusters around Dragonfly 44 is much less than earlier findings had suggested.

This galaxy is neither unique nor anomalous.

A few years ago, a very diffuse object, named Dragonfly 44, was discovered in the Coma cluster, containing several thousand galaxies. This galaxy has 10,000 times more dark matter than the stars.

Was this celestial object really anomalous?

Did something go wrong in the analysis of the observations?

From the start, the galaxy was considered remarkable by the researchers because the quantity of dark matter they inferred was almost as much as that in the Milky Way, the equivalent of a billion solar masses.

However, instead of containing around a hundred thousand million stars, as has the Milky Way, Dragonfly 44 has only a hundred million stars, a thousand times fewer. This means that the amount of dark matter was ten thousand times greater than that of its stars. If this had been true, it would have been a unique object, with almost 100 times as much dark matter as that expected from the number of its stars.

The researchers have also detected that the total number of globular clusters is only 20, and that the total quantity of dark matter is around 300 times that of the luminous matter, which means that it is not way outside the normal value for this type of galaxies.

“The fact that in our work we found only 20 globular clusters, compared with the 80 previously claimed, reduces drastically the amount of dark matter which the galaxy is believed to contain,” explains Ignacio Trujillo, an IAC researcher and a co-author of the article, said in a press release.

“Moreover, with the number of globular clusters we found, the amount of dark matter in Dragonfly 44 (DF44 ) is in agreement with what is expected for this type of galaxies. The ratio of visible to dark matter is no longer 1 in 10,000 but one in 300.”

Teymoor Saifollahi, a researcher at the Kapteyn Institute, and the first author of the article said that DF44 has been considered an anomaly for a long time but the previous results were wrong, and this galaxy is not extraordinary.

“Our work shows that this galaxy is not so singular nor unexpected. That way the models of galaxy formation can explain it without the need for modification,” says Michael A. Beasley, another IAC researcher, a specialist in globular clusters, and a co-author of the article.

“However, we don’t have a physical explanation for this relationship between the total number of globular clusters and the total mass of the galaxy.

“This is purely observational knowledge. It could be that it has to do with the quantity of the original gas from which the stars, and the globular clusters themselves, have formed. The more dark matter there is in a galaxy, the more gas it contains,” suggests Johan H. Knapen, an IAC researcher and also a co-author of the article.