Jan Bartek – MessageToEagle.com – Scientists have made a stunning reconstruction of the faces of the Siberian Tutankhamun and his Queen who died 2,600 years ago.

Skeletons of the couple were found some years ago in Arzhan, a site of early Scythian kurgan burials, located in the Tuva Republic, Russia. 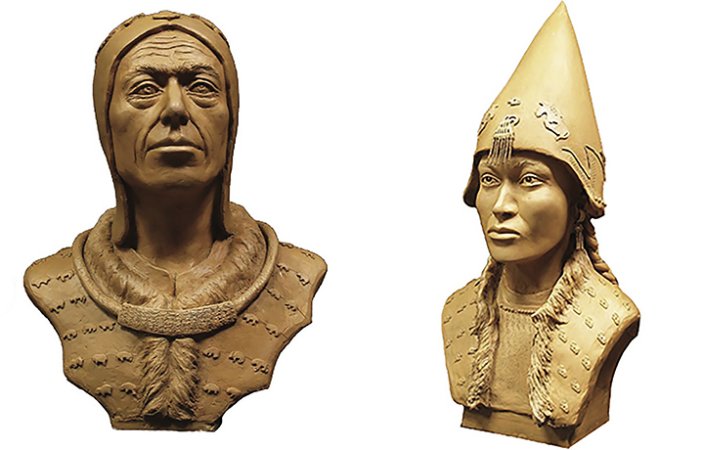 ‘In front of us, there is a battle-hardened Scythian warrior, carrying in his appearance a unique combination of Caucasoid and Mongoloid features’, Moscow anthropologists said.
Credit: Elizaveta Veselovskaya, Ravil Galeev

“From about 700 to 300 BC one particular group of migratory peoples, identified as Scythians by the Greeks, suddenly appeared on the Eurasian steppes.

The Scythians were nomads who along with wild horses roamed the grasslands stretching from the Carpathian Mountains of Eastern Europe to what is now southeastern Russia. They were excellent horsemen and were among the first to use the saddle and stirrup.

Some modern scholars suggest three theories to explain their sudden and mysterious appearance. Some believe they migrated there from the north, others from the east, or perhaps from the south. 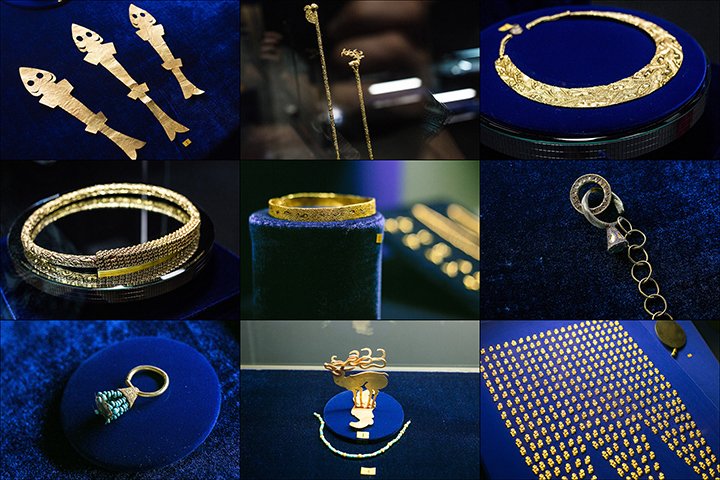 Although the geographic origins of the Scythian people are hotly debated, evidence for the time of their first appearance in history is not. They suddenly appeared at the same time and near the same area of the Israelites’ disappearance.” 1

In recent years, archaeologists have made many intriguing discoveries that shed new light on the history of the Scythians. Last year, for example, scientists discovered evidence supporting the existence of Amazon warriors who have previously been considered merely mythological characters.

Russian archaeologists currently conducting excavations in the Voronezh region have discovered an intriguing grave that belongs to a Scythian Amazon warrior. It’s a valuable historical discovery that sheds new light on the importance of fierce ancient female warriors. What makes this finding even more exciting is the beautiful ceremonial headpiece that was placed on the head of the deceased woman.

Equally interesting are the archaeological discoveries of the Scythian ‘King’ and the ‘Queen’. After spending years studying the remains of these two people scientists can now for the first time reveal the features of the powerful couple buried in their gold-encrusted, awe-inspiring clothing in the Arzhan-2 burial.

Anthropologists from the Moscow Miklukho-Maklai Institute of Ethnology and Anthropology, and Novosibirsk Institute of Archeology and Ethnography have “meticulously building 3d models of the skulls, using laser scanning and photogrammetry to then re-create the faces of the people that ruled vast sways of steppes and mountains at the time when the Great Pyramids were getting built in Egypt,” the Siberian Times reports.

‘The most time-consuming restoration work has been done for the ‘Tsar’s’ skull. Only half of the skull was preserved, which made the task much more complicated. The restoration of the brain area was not particularly difficult, since the remaining half made it possible to mirror the destroyed part’, wrote Moscow-based anthropologists Elizaveta Veselovskaya and Ravil Galeev. 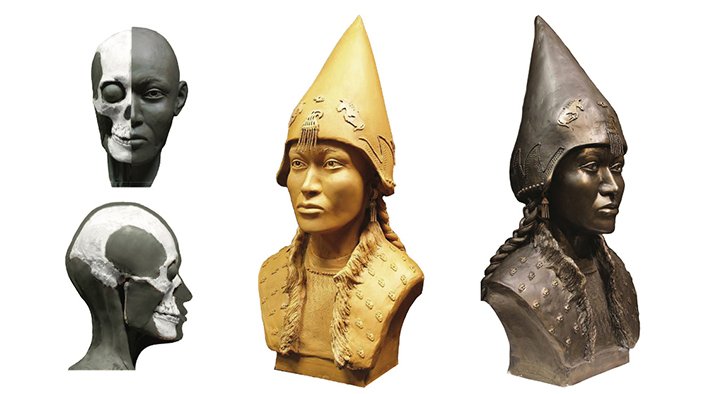 In the article for Russian ‘Journal of Archeology, Anthropology and Ethnography’ they explained: ‘Great difficulties were associated with the restoration of the facial section. Unfortunately, less than half of the face was preserved, and elements of the skull important for reconstruction have been lost.

‘Therefore, the restoration of this skull took a long time: each missing element was restored based on the existing surrounding structures. The preserved lower jaw was of great importance during the restoration, thanks to which the destroyed area of the upper jaw was restored. The restoration was carried out with hard sculptural clay and hard polyurethane foam.’

According to the Siberian Times, “Siberian scientists established that people buried in the Arzhan-2 mound were – regardless of their social status – from quite a homogenous group in terms of anthropology, which combined features of the Caucasian and Mongoloid races. 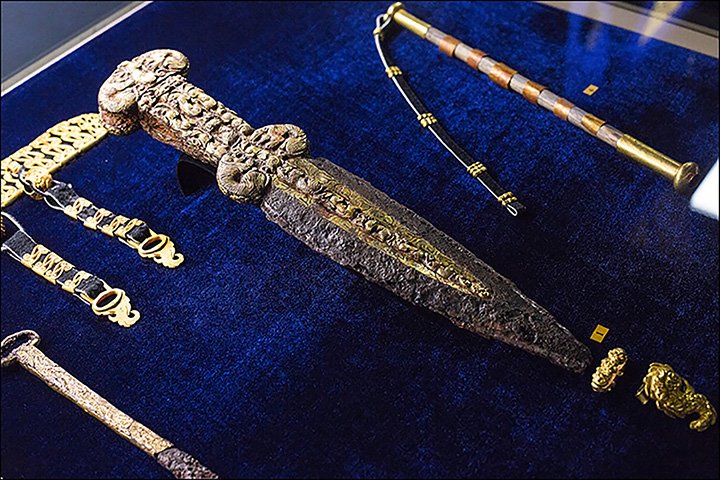 Of the ‘King’, Moscow anthropologists said: ‘In front of us there is a battle-hardened Scythian warrior, carrying in his appearance a unique combination of Caucasoid and Mongoloid features’.

The ‘King’ and the ‘Queen’, described so conditionally by scientists because of the astonishingly-rich burial were found in the center of a wooden chamber skilfully hidden from robbers under the 80-meter-large mound in the remote Republic of Tuva.

Another theory suggests that the woman could have been the ‘King’s’ favorite concubine, sacrificed to accompany him to the afterlife along with 33 other people, including five children.

Fourteen stallions in full dress of gold, bronze and iron, and all taken from different herds were found inside the burial, too. 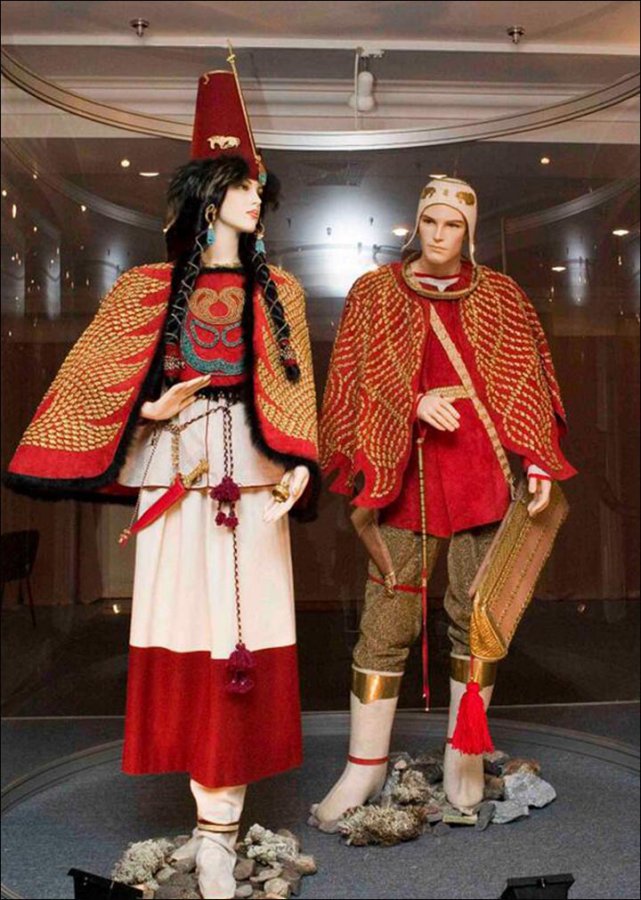 Now for the first time, the features of the powerful couple buried in their gold-encrusted, awe-inspiring clothing can be seen in life-like sculptures thanks to the work of Moscow Ethnology and Anthropology and Novosibirsk Institute of Archeology and Ethnography. Pictures of the reconstructed skulls by Elizaveta Veselovskaya, Ravil Galeev. Picture of the reconstructed costume by Hermitage

The ‘Queen’s’ decorations were also striking, albeit more modest. She had turquoise beads, golden badges and pins, a miniature golden cauldron, a golden bracelet and a bag with cosmetics. On her belt was an iron dagger decorated with gold.

In all, some 9,300 decorative gold pieces were found here, not including the ‘uncountable golden beads’. Put in another way, there was more than 20 kilograms of gold, including earrings, pendants and beads, adorning the bodies of the royal couple all made in what is known as Scythian Art style.

The find has been described by Dr Mikhail Piotrovsky, director of the Hermitage Museum as ‘an encyclopedia of Scythian Animal Art because you have all the animals which roamed the region, such as panther, lions, camels, deer…’ It includes ‘many great works of art – figures of animals, necklaces, pins with animals carved into a golden surface’, he told The New York Times.

‘This is the original Scythian style, from the Altai region, which eventually came to the Black Sea region and finally in contact with ancient Greece. And it almost resembles an Art Nouveau style.’