Eddie Gonzales Jr. – MessageToEagle.com – The James Webb space telescope has revealed dazzling new detail of a previously known slice of the cosmos 32 million light-years away, in a new picture released by NASA and the European Space Agency (ESA).

The infrared technology of the telescope, launched in December 2021, has allowed for an even clearer view of the so-called Phantom Galaxy than astronomers had ever seen before. 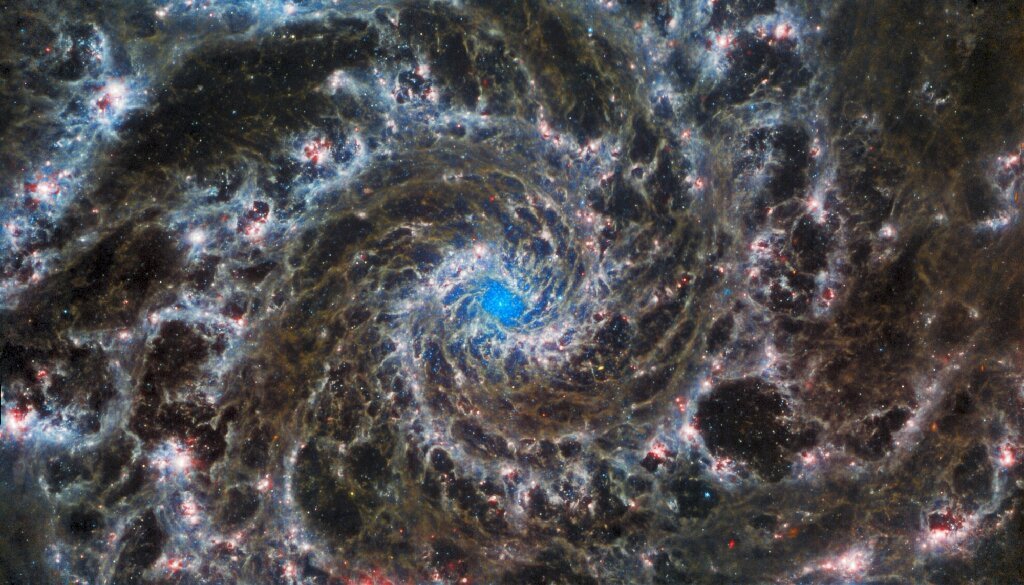 The Phantom Galaxy is a “favorite target for astronomers studying the origin and structure of galactic spirals,” NASA and the ESA said.

“Webb’s sharp vision has revealed delicate filaments of gas and dust in the grandiose spiral arms which wind outwards from the center of this image,” NASA and the ESA said Monday.

“A lack of gas in the nuclear region also provides an unobscured view of the nuclear star cluster at the galaxy’s center,” the agencies said in a statement.

The whirling celestial form, officially called M74, is located in the Pisces constellation 32 million light-years away from Earth.

The Webb image shows the galaxy’s brilliant white, red, pink and light blue appendages of dust and stars swirling around a bright blue center, all set against the dark backdrop of deep space.

M74 was previously photographed by the Hubble telescope, which captured the galaxy’s spiraling blue and pink arms, but instead showed its glowing center as a soft yellow.

The Phantom Galaxy is a “favorite target for astronomers studying the origin and structure of galactic spirals,” NASA and the ESA said. The picture taken by Webb will help them “learn more about the earliest phases of star formation in the local Universe,” and record more information about 19 star-forming galaxies close to our own Milky Way.

Astronomers will also use the picture to “pinpoint star-forming regions in the galaxies, accurately measure the masses and ages of star clusters, and gain insights into the nature of the small grains of dust drifting in interstellar space,” the statement said.

Webb’s new pictures have thrilled the space community as the telescope orbits the Sun at a distance of a million miles (1.6 million kilometers) from Earth, in a region of space called the second Lagrange point.

The telescope, which has a primary mirror more than 21 feet (6.5 meters) wide, is an international collaboration between NASA, the ESA and the Canadian Space Agency. It is expected to operate for approximately 20 years.