Eddie Gonzales Jr. – MessageToEagle.com – The creation of a huge black hole, 142 times the mass of the Sun, has been observed after two smaller black holes collided seven billion years ago.

An international team of astronomers, including scientists from the Astronomical Observatory of the University of Warsaw and the National Centre for Nuclear Research, made the remarkable observations after measuring gravitational waves. 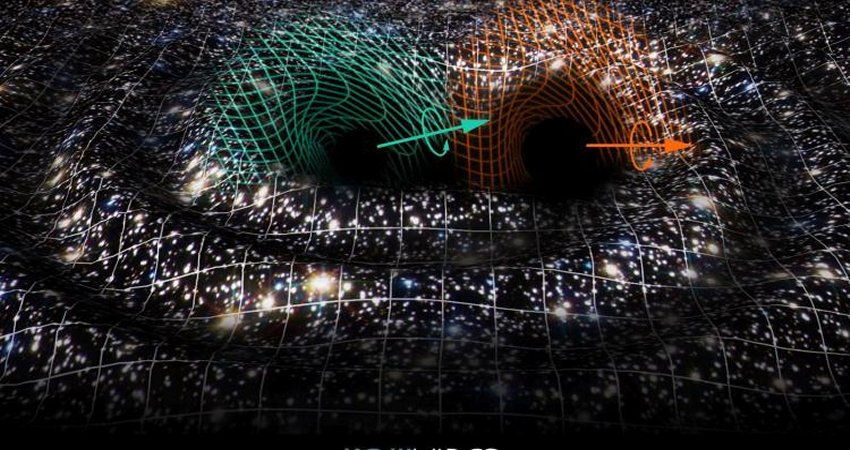 Artist’s interpretation of the coalescence (joining) of the binary black hole system responsible for the GW190521 signal. Space-time, presented as a grid over the image of the cosmos, is distorted by the GW190521 wave. Credit: Raúl Rubio / Virgo Valencia group / The Virgo Collaboration.

In order for gravitational waves to be detected, the masses and accelerations must be very large.

On May 21, 2019, scientists picked up a signal which turned out to be the collision which happened seven billion-years ago, the largest black hole ever detected with gravitational waves or electromagnetic observations, writes PAP.

Professor Dorota Rosińska from the Polish Virgo-Polgraw team said: “The discovery of GW190521 is undoubtedly a great challenge for modern astrophysics, cosmology, and fundamental physics.

“For the first time, we observed the coalescence of two black holes with such atypical masses and the formation of an intermediate-mass black hole.

“It was the most energetic and most distant event that could be recorded in gravitational waves. As the sensitivity of detectors increases, we will observe more and more phenomena from the early universe.”

Black holes are generally divided into those with a stellar-mass (several or a dozen or so solar masses) and supermassive black holes with masses of hundreds of thousands, millions, and even billions of solar masses.

The latter reside in the centers of galaxies, for example, the object in the center of the Milky Way has a mass of about 4 million solar masses. There is also a group of objects with a mass between stellar and supermassive black holes. The boundaries are fluid here, but it can be assumed that intermediate-mass black holes are between 100 and 100.000 solar masses.

The masses of the two black holes that collided are themselves a challenge to astrophysical models that describe the collapse of the most massive stars at the end of their lives.

Professor Michela Mapelli from the University of Padova and the INFN, and a member of the Virgo collaboration said: “Several scenarios predict the formation of black holes in the so-called pair-instability mass gap: they might result from the merger of smaller black holes or from the collision of massive stars or even from more exotic processes.

“However, it is also possible that we have to revise our present understanding of the final stages of the star’s life and the resulting mass constraints on black-hole formation. Either way, GW190521 is a major contribution to the study of the formation of black holes.”

Scientists estimate that the coalescence (the merger of black holes) took place about 7 billion years ago, that is, in the deep past of the Universe. Compared to previous gravitational wave detections, the observed signal GW190521 had a much shorter duration, which makes the analysis difficult.

Scientific papers about the discovery have been published in Physical Review Letters and Astrophysical Journal Letters. The work describing GW190521 is the result of cooperation of over a thousand scientists from around the world collaborating in the LIGO-Virgo consortium, including sixteen scientists from Poland.

The Virgo project involves approximately 580 scientists, engineers and technicians from 109 institutes in 13 countries, mainly European ones: Belgium, France, Greece, Spain, the Netherlands, Ireland, Japan, Monaco, Germany, Portugal, Hungary, Italy, and Poland. Its American counterpart is the LIGO project, which has two detectors in the US. Institutes from outside the United States are also involved in the project. In total, approximately 1,300 scientists from around the world work in the LIGO consortium. LIGO and Virgo work closely together.