Question: What was life like for children in ancient Athens?

Answer: Survival was very difficult for infants born in ancient Athens. The mortality rate was very high so babies were not given a name until they were between 7 – 10 days old. Fearing their child would die, parents delayed the formality of naming their child. An infant with any imperfection, was often killed or abandoned. Unfortunately nearly any excuse passed as a reason to abandon a baby, especially for females. Sometimes abandoned infants were taken in and adopted by a wealthy family, but most of the time they became a slave of the adoptive family.

Boys in Athens usually went to school and learned to read, write and memorize epic works of literature. If they were from a wealthy family and it was thought they might go into politics, they also learned the art of public speaking. Many boys had private tutors to help them with their lessons at home.

Girls like their mothers stayed at home to learn domestic jobs such as weaving, working with textiles, taking care of children, embroidering and cooking so as they would know what to do when they had a house of their own to run.

Childhood was short for girls. As a signal that their childhood had ended and they were ready for marriage, they gathered all of their toys and put them on the altar at the temple of Artemis. Traditionally they would marry by age fourteen or fifteen, and then would live in their husband’s home. Once married, she rarely went out in public, subsisting in seclusion and only interacting with the household.

Shortly after marriage the women were expected to have a baby. If she was unable to get pregnant she was considered to be cursed by the gods. 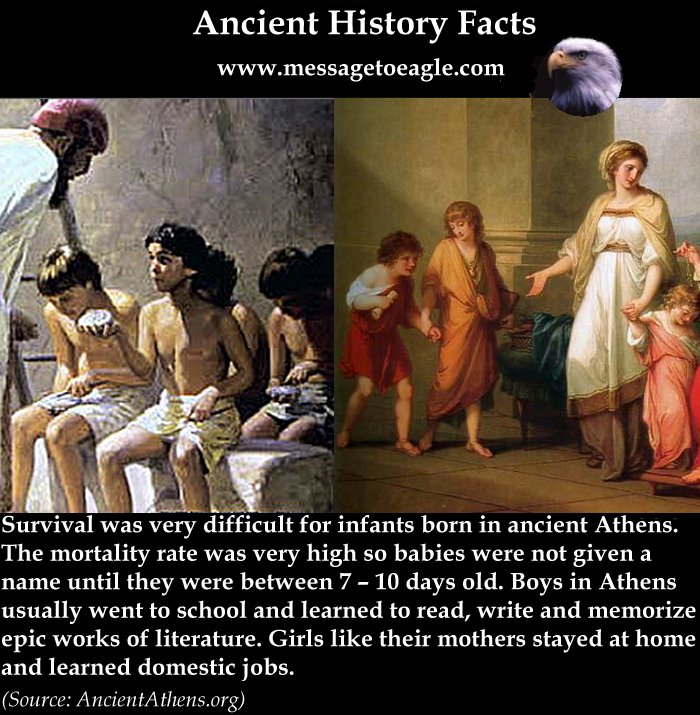