MessageToEagle.com – In early European times, most household wares like dishware, jars and barrels were made of dense, orange-colored, economical clay.
People used to put their small savings in kitchen jars made of this clay and called them “piggy jars”.
Later, the jars became known as ” piggy bank” or ” piggy banks” because like all banks, they stored coins inside them.

The etymology of the expression “piggy bank” is rather concealed in obscurity but the most popular story is that during the 1800’s, an English jar maker made a mistake.

When some customers ordered ” piggy banks”, he produced banks but shaped like a pig.
Although the customers did not get what they expected, they liked the final product very much. Funny pigs delighted children and the customers were really fond of them!

Soon, all potters and jar makers were overwhelmed by new orders to produce toy-like figurines representing a pig, which had no hole in the bottom, so the pig had to be broken to get the money out. 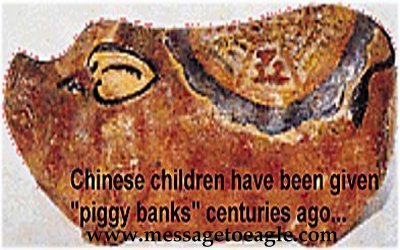 To this day, in some countries, it is customary to give “piggy banks” as gifts because they are, in fact, great gift ideas for home and office as well.
In these countries, among many deeply held beliefs, there is one saying that pigs bring luck and good fortune.

The “piggy bank” is an ancient phenomenon.

As we know, money, is an important part of human life and apparently to save money is considered to be a deeply rooted custom of humans nature.

A “piggy bank” dated to about 330-280 BC during the excavations on the site of ancient Babylon, not far from Iraq’s capital of Baghdad.

Another money box dated back to 2nd century BC, the so-called Priene “piggy bank” of baked clay, was found in ancient ruins of Priene, near Efeso, located south off an ancient Greek seaport of Asia Minor.

See also:
Our Lives Have Always Been Manipulated By Money – Part 1-3

A great variety of prehistoric money boxes were also excavated in Pompeii and Herculaneum, Italy and a terracotta “piggy bank” shaped like a pig and dated back 1,500 years was unearthed in East Java, Indonesia.

Since ancient times, people have been saving money in pig-shaped containers.