MessageToEagle.com – There are people who have demonstrated our bodies can withstand extreme temperatures. One such person is the Dutchman Wim Hof who possesses extraordinary ability to withstand below freezing temperatures.

Known as the Iceman, Wim has done almost everything that was previously thought to be impossible, but he not a freak of nature. He is a master of a meditation technique that he acquired from Mother Mature.

He successfully used the meditation skills to develop a method how to consciously control the immune system to fight off diseases.

Wim Hof is the holder of 20 Guinness World Records. Everything he has done is truly remarkable. He is the world record holder of ice endurance by standing in a container full of ice for 1 hour 52 minutes and 42 seconds. He ran a full marathon above the polar circle at a temperature of −20 °C (−4 °F) on his bare feet. He climbed Mount Kilimanjaro just wearing shorts. 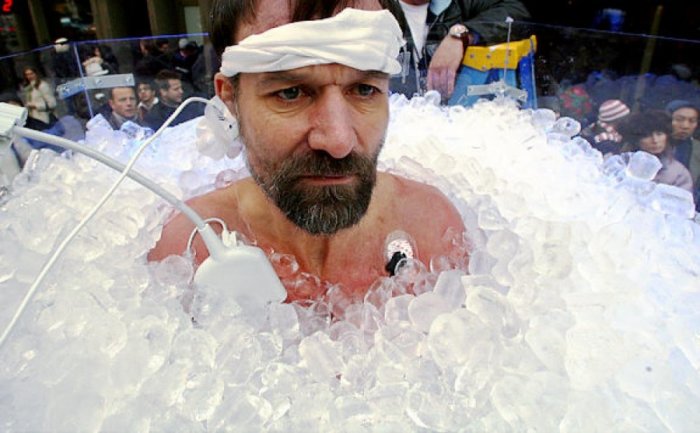 Wim Hof is the holder of 20 Guinness World Records.

He is also capable of doing amazing feats in the heat. He ran for example a full marathon (42.195 kilometres (26.219 mi)) on the highest desert plains in the world, the Namib Desert, without any water and without any food.

Wim Hof first caught the attention of scientists when he proved he was able to stay submerged in ice for one hour and 53 minutes without his core body temperature changing.

Wim Hof has been working with a group of university researchers to prove that anyone can do the extraordinary things he does.

Researchers have confirmed that Wim is indeed capable of consciously controlling his autonomic nervous system and immune responses.

Wim is able to accomplish these feats with ease through the use of ‘The Wim Hof Method‘. It is a breathing technique that allows you to control the autonomous systems of the body.

Wim has studied yoga and meditation for many years, but his technique is different in that sense that it’s based on what he calls ‘cold hard nature’.

By subjecting himself to the bitter conditions of nature, Wim learned to withstand the extreme forces of cold, heat and fear. If you learn this method or technique correctly, it will empower you do to the same, but be careful so nothing goes wrong.