Conny Waters – MessageToEagle.com – Unlike many other ancient civilizations, people in believed something unpleasant was awaiting the deceased on the other site. Our knowledge about the Mesopotamian afterlife beliefs comes from literary texts recorded on cuneiform clay tablets.

Despite the beliefs in the afterlife, people in Mesopotamia accepted the idea ghosts were real. 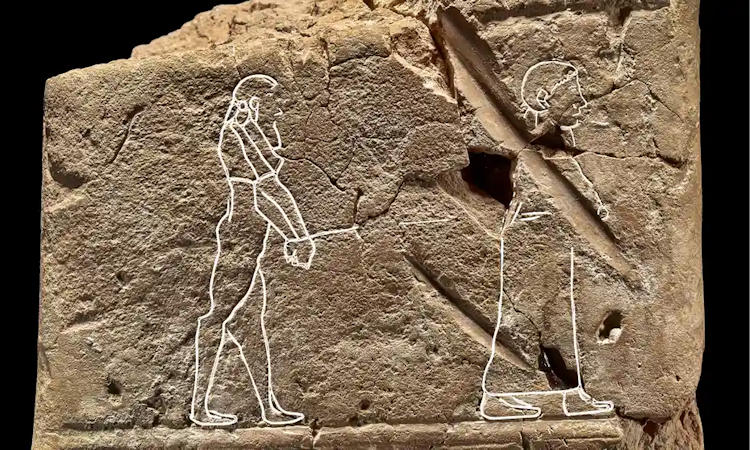 A lonely spirit being led to eternal bliss by a lover on a Babylonian clay tablet. White line tracing © James Fraser and Chris Cobb for The First Ghosts, by Irving Finkel. Photograph: The British Museum

Hidden in the dark vaults of the British Museum, scientists have now re-examined a 3,500-year-old Babylonian clay tablet that has been incorrectly deciphered previously.

Dr. Irving Finkel, curator of the Middle Eastern department at the British Museum, said the “absolutely spectacular object from antiquity” had been overlooked until now.

The Babylonian tablet is one of its kind because it engraves what researchers label the world’s oldest depiction of a ghost.

“The drawing presents a male ghost with his hands tied by a rope, being led by a woman pulling the rope. It is said to be a guide to getting rid of unwanted ghosts by acknowledging what brought them back to the living world, which is shown here as a ghost searching for a partner.

Half of the tablet is reportedly missing, according to the report, and the other half is said to be small enough to fit in a human palm. The other side of the tablet contains instructions of what to do should a ghost continue to pursue any individual, which requires making figurines of a man and woman,” the Jerusalem Post reports.

The main reason the Babylonian tablet has gone unnoticed and never exhibited is that the ghost is only visible when viewed from above and under a light. 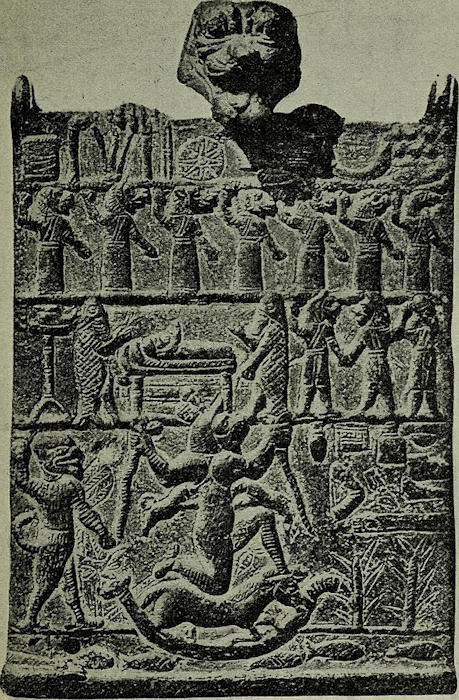 Bronze plate on which are depicted the gods of the dead in attendance upon a deceased person and certain demons and dwellers in the Babylonian underworld. Credit: King, L. W. (Leonard William), 1869-1919 – Public Domain

“You’d probably never give it a second thought because the area where the drawings are looks like it’s got no writing. But when you examine it and hold it under a lamp, those figures leap out at you across time in the most startling way. It is a Guinness Book of Records object because how could anybody have a drawing of a ghost which was older?” Dr. Finkel told the Guardian.

As the Guardian reports, “while half the tablet is missing and it is small enough to fit in a person’s hand, the back bears an extensive text with the instructions for dealing with a ghost that “seizes hold of a person and pursues him and cannot be loosed”. The ritual involves making figurines of a man and a woman: “You dress the man in an everyday shift and equip him with travel provisions. You wrap the woman in four red garments and clothe her in a purple cloth. You give her a golden brooch. You equip her fully with bed, chair, mat and towel; you give her a comb and a flask.

“At sunrise towards the sun you make the ritual arrangements and set up two carnelian vessels of beer. You set in place a special vessel and set up a juniper censer with juniper. You draw the curtain like that of the diviner. You [put] the figurines together with their equipment and place them in position… and say as follows, Shamash [god of the sun and judge of the Underworld by night].”

The text ends with a warning: “Do not look behind you!”

Finkel believes the tablet was part of a library of magic in the house of an exorcist or in a temple.”

The ghost has appeared just in time for Halloween. Its discovery features in Finkel’s forthcoming book, The First Ghosts: Most Ancient of Legacies, to be published on 11 November by Hodder & Stoughton.