MessageToEagle.com – Today parents buy their children electric car toys to play with, but thousands of years ago the situation was somewhat different.

Yet, this ancient discovery reveals our ancestors were aware of the wheel 7500 years ago!

A stone car with two axles and 4 wheels dating from about 7500 years ago was found during excavations in the Kiziltepe district of the southeastern province of Mardin, are now on display at the Mardin Museum, Turkey.

Archaeologist Mesut Alp said that the toy car, which is made out of stone, dates back to the late Stone Age and is thought to be 7,500 years old.

According to the Culture and Tourism Director of Mardin, Davut Beliktay, the car is like a copy of cars today. He also points out that the shape of this ancient toy resembles a tractor.

Beliktay also revealed that toy dolls and whistles, also made of stone, were found at sites in the area, “we believe that the whistles and dolls are 5,000 to 6,000 years old. The whistles are still in working condition,” he said.

In display was also an ancient stone tablet inscribed with writing.

Following exhaustive historical analysis, the writing on the 5 centimeter stone, which was uncovered at an excavation site at the Girnavas Mound, 4 km from the historic district of Nusaybin -was deemed to be the content of an ancient title deed. 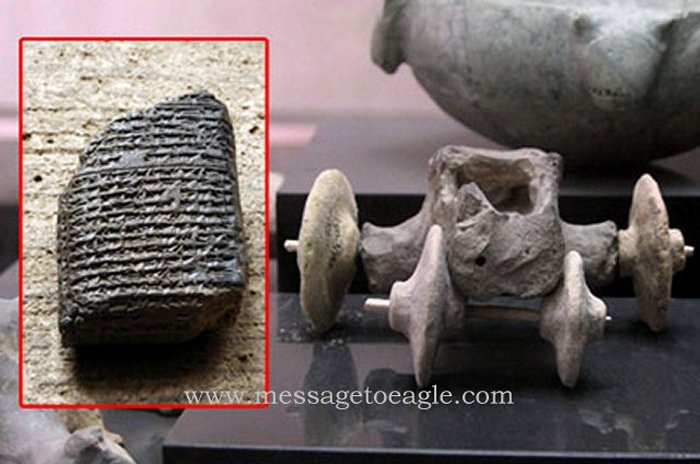 Beliktay said that the writing on the historic tablet had managed to remain intact over the years because of excellent preservation techniques. The script, he explained, had been scraped on to the clayish surface with a nail and then the tablet had been placed in a burner.

Archaeologist Alp explained that the title deed is 2,800 years old and pertains to the selling of a garden.

The content of the deed he added refers to a fruit garden, and the fruit trees within, which are to be split between the three sons of the owner. The deed refers to “Nabulu” which Alp explained was in fact the old name of current Nusaybin. Beliktay has confirmed that comprehensive information on the two finds will be provided soon.

Still, the most fascinating item is the ancient car toy. Some have suggested it is not a car, but rather a chariot. However, chariots usually have only two wheels and pulled by an animal.

Evidence of ancient knowledge of wheel can be found in other time periods.

Rock engravings, the handful of wagon models and the wagon depictions incised onto clay vessels are no longer our only proof for the use of wagons. The archaeological record has been enriched by new categories of evidence.

The first comprehensive overview of Copper Age wheel models was written by Marin Dinu in his study “Clay Models of Wheels Discovered in Copper Age Cultures of Old Europe Mid-Fifth Millenium B.C.” Dinu pointed out that the use of wheeled vehicles could thus be dated much earlier than previously assumed.

Yet, archaeological record provides undisputable evidence that wheels were known across the greater part of Europe and Anatolia from the earlier 4th millennium BC onward.

However, nothing as astonishing as the ancient toy car kept at the Mardin Museum has ever been found.

So the question remains: Is this little ancient toy car perhaps the earliest evidence of the wheel?