MessageToEagle.com – Romania is a country full of ancient secrets. It is a place where we encounter mysterious ancient artifacts, ancient manuscripts describing amazing events, traces of unknown lost civilizations and many other intriguing ancient riddles.

In this top list we take a closer look at 10 great ancient mysteries of Romania.

The Sibiu Manuscript is an astonishing ancient manuscript that describes a rocket launch that took place in the city of Sibiu, Romania. This incredible event was witnessed by thousands of people and ended up in a complete success. The city of Sibiu is known to many of us because it is the birthplace of Hermann Oberth, considered to be one of three fathers of rocketry and modern astronautics. Read more

The more 2,000-year-old hexagonal-shaped bronze matrix of Sarmizegetusa is one most valuable and intriguing archaeological discoveries ever made in Romania.

The matrix is the only one of its kind in Europe and it’s extremely complex. According to archaeologists, the matrix was used to create decorative pieces from precious metals. The hexagonal shape is encrusted with sculptures representing mythological creatures from the Mediterranean region. Read more

3. Supernatural Forces In The Buzau Mountains 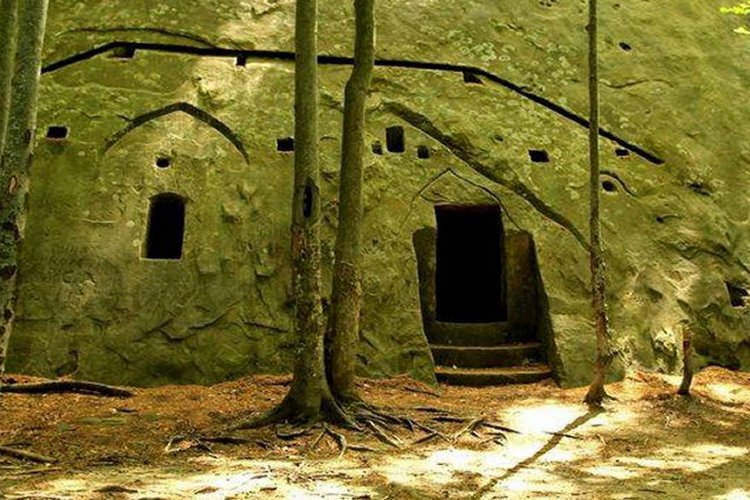 The Buzau Moutains in Romania are just as beautiful as mysterious.

Those who dare to walk on the mountain roads have the opportunity to visit the most important cave complex in Buzau Mountains.

The caves can be found on the territory called Luana’s Land (Tara Luanei), situated near Alunis, Nucu and Colti villages. Many rocks and cave walls in Luana contain an old writing that has not yet been deciphered. On the walls are also several enigmatic inscriptions. Some of them resemble stars and crosses, but the true meaning of them is unknown. Some artifacts have been discovered in the region and there are also carvings of unknown beings.

According to an ancient legend, the “Luana Kingdom” was protected by powerful beings that guarded the gates of the city. They built huge walls that were shining brightly day and night. This ancient place is truly full of secrets. Read more

Here in a small village named Costesti, there are some fascinating and mysterious stones, called trovants that are believed to be alive…

It is difficult to imagine that stones can really grow, but these stones seem to be alive! Trovants – represent a quite bizarre geological phenomenon, which consist in spherical shapes of cemented sand due to some powerful seismic activity that occurred 6 million years ago.

The earthquakes definitely contributed to the creation of the first trovants. It is assumed that trovants consist of a stone core, with an outer shell of sand.

What makes these formations unique and mysterious is that they are reproducing after coming in contact with water.

After heavy raining the stones grow starting with 6-8 millimeters and ending with 6-10 meters. Read more

It is in Transylvania we come across a cave that contains 36,500 year-year-old footprints that could change our understanding of the past. The footprints do not cluster about three different sizes, and the number of individuals is estimated to be six or seven, including at least one child.

They entered the cave after a flood had coated its floor with sandy mud. Who were the mysterious people that inhabited the cave? What happened to them? The footprints discovered in the Ciur-Izbuc Cave force scientists to re-evaluate their understanding of these mysterious people who lived in the Carpathians 36,500 years ago. Read more 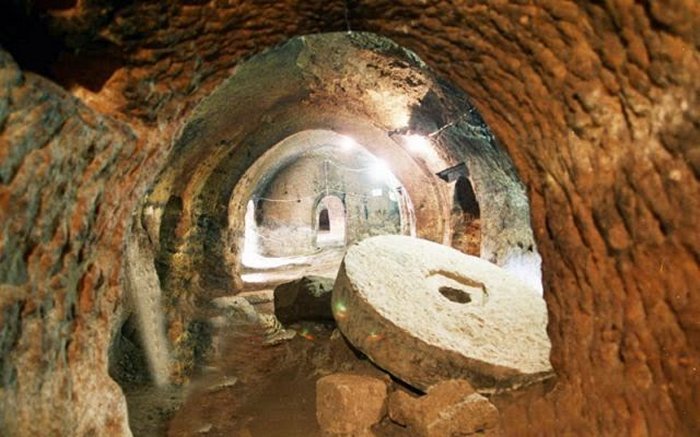 There are many underground labyrinths that haven’t been fully explored to this day.

One of them is located about 52 kilometers from Constanța, historically known as Tomis, the oldest continuously inhabited city in Romania. This huge labyrinth of 12 hectares lies beneath the plateau of Limanu. Researchers started to investigate it in 1916 and discovered traces left by humans, carved walls and ceilings, as well as very old ceramic fragments.  Drawings and inscriptions in Roman and Cyrillic alphabets on the walls prove the cave was inhabited between 1st century BC and 10th century AD.

The labyrinth is very vast and the early inhabitants of the cave used a marking system to avoid getting lost.

Approximately 4,000 meters length, Limanu Cave is by far the longest in Dobrogea. It has a dizzying branching of galleries, like the street network of an unorganized ancient city chaotically developed. Some researchers believe that at least some of the galleries were entirely dug by human beings, as there are tooling marks on the walls. The network gallery actually resembles a city street map, like the street network of an ancient city developed chaotically, thus the impression of an underground city. Local stories mention strange and frightening wails coming from the depths of the earth, with those who hear them becoming mesmerised and starting looking for the voice. It is said that the voice would be the voice of the entrance guardian who wants to lure in the profane and make them blasphemously tread on the sacred earth of Zamolxis. Moreover, a mystery was woven concerning the interpretation of images displayed by fallen boulders at the entrance to the cave, which should be the faces carved in stone of Zamolxis, whose spirit guards the entrance to the sacred realm until the Dacian ancestors come back from the abyss. Read more 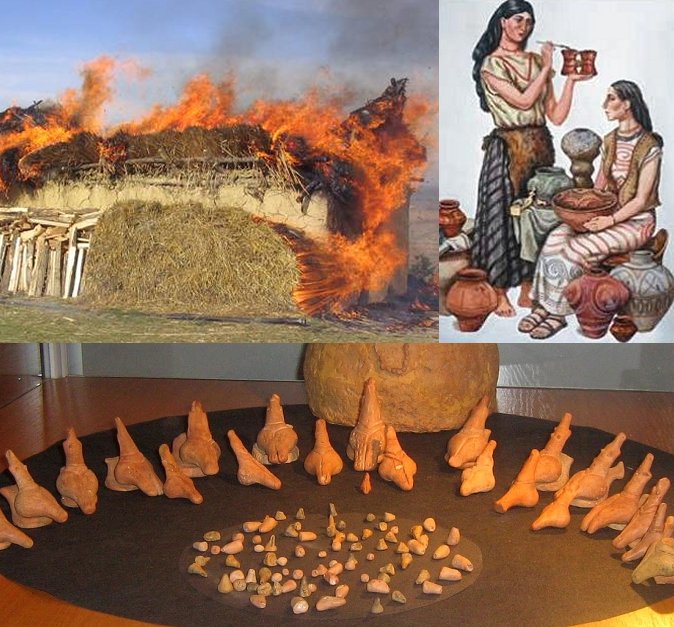 The mysterious Cucuteni-Trypillian culture lived in Eastern Europe thousands of years ago. They left behind a number of intriguing ancient artifacts, destroyed settlements, and sacred sanctuaries. It remains unclear why and how they vanished. It is also a mystery why they regularly burned their settlements.

These people lived in area of around 35,000 square kilometers, incorporating parts of present-day Moldova, Romania and Ukraine, between 5400 and 2700 BCE.

The culture was initially named after the village of Cucuteni in Romania. Read more 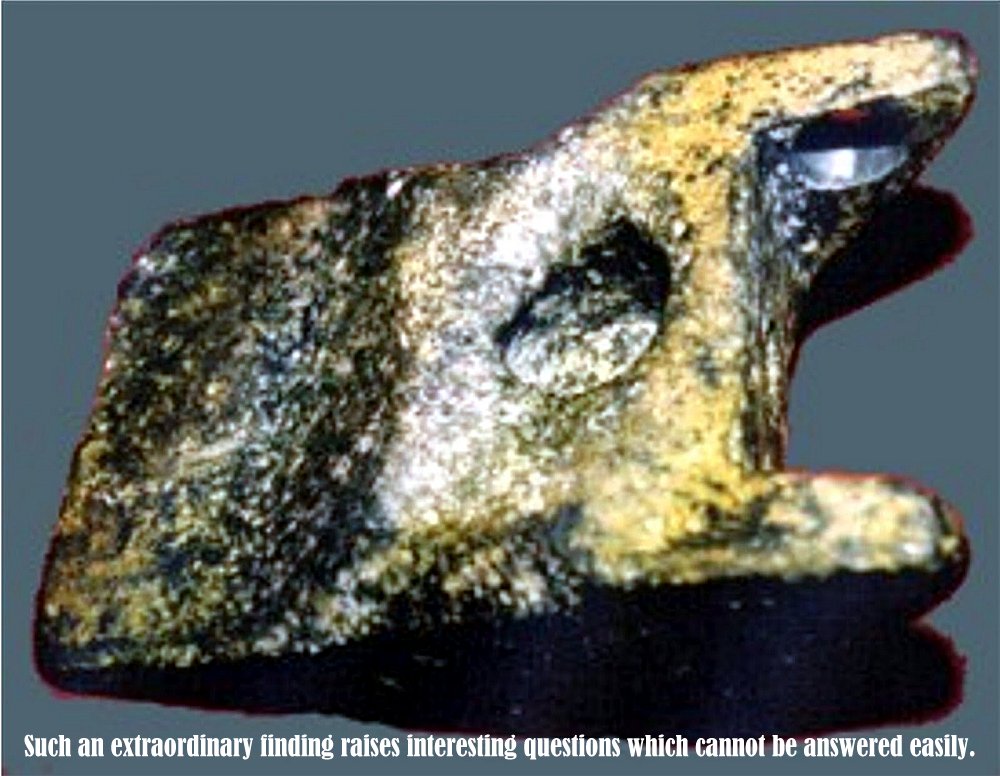 In the beginning of 1974, a strange object was brought to light by a group of construction workers digging in the area of central Romania.

The discovery was made at the depth of approximately ten meters, in the sediments of the river Mures, 2 km east of Aiud and about 50 km south of Cluj-Napoca, former capital of Transylvania.

This artifact was discovered together with very ancient bones, (including the jaw) of a mastodon, in a sand pit under a 35-foot-thick layer of sand.

The specimen is 20.2 cm long, 12.7 cm wide, 7 cm high and has a circular depression (4 cm in diameter) in the center. At the beginning, no one was particularly interested in the artifact, so it landed in a storage room at the Historical Museum of Transylvania and remained there unnoticed for 21 years.

It was not until 1995, the piece of metal, weighing 2.3 kilograms was “rediscovered” and analyzed.

The object was composed largely of aluminum (89%), a metal often found in nature, however, not only in pure form, but the state of bauxite, from which most aluminum is extracted. The purpose of the object remains unknown. Read more

9. Controversial Tartaria Tablets: The First Writing System In The World?

The inscribed tablets were examined by a number of scientists from all across the world and isotope carbon 14 dating revealed they were created at least 6,500 years ago.

The tablets covered with pictographic writing are extraordinary because they raise the possibility that writing in the Danube basin predated the earliest Sumerian cuneiform and Egyptian hieroglyphics.

This suggests that the Tartaria tablets represent the first writing in the world, which we know of. It is needless to say that this discovery caused great interest and controversy in the scientific community.

The tablets which are 1,000 years older than the Mesopotamian writings contain signs that have remained undeciphered until this day. Read more

A 35,000-year-old fossil found in the Pestera Muierii cave in Romania can shed new light on the back-migration to Africa hypothesis.

The mitochondrial genome of a fossil belonged to a woman who was part of the first population of our species that inhabited Europe following the Eurasian expansion of Homo sapiens from Africa, and the lineage she belongs to reinforces the hypothesis of a back-migration to Africa during the Upper Palaeolithic.

Based on the preliminary results, researchers now think it’s possible to to confirm the Eurasian origin of the U6 lineage but also to support the hypothesis that some populations embarked on a back-migration to Africa from Eurasia at the start of the Upper Palaeolithic, about 40-45,000 years ago. The Pestera Muierii individual represents one branch of this return journey to Africa of which there is no direct evidence owing to the lack of Palaeolithic fossil remains in the north of Africa. Read more