Eddie Gonzales Jr. – MessageToEagle.com – A new gigantic sauropod was found in Argentina. Its observed bones are 10 to 20 percent larger than those of Patagotitan mayorum, the largest dinosaur known to date. It is not only extraordinary the size of this specimen found in the central region of Neuquén Province, but it is also surprising how articulate the fossil remains are.

Three sizes of sauropods found at this site. A new gigantic sauropod finded in Argentina. Its observed bones are 10 to 20 percent larger than those of Patagotitan mayorum, the largest dinosaur known to date. It is an extraordinary the size of this specimen found in the central region of Neuquén Province. Image credit: Gabriel Lio

It is estimated that Patagotitan mayorum weighed about seventy tons, measured about 40 meters in length, and could reach what would in present be the height of the seventh floor of a building with its long neck raised. Could it be that, perhaps, this new specimen from Neuquén would reach an eighth floor?

Dr. Alejandro Otero, researcher at the Vertebrate Paleontology Division of the Museo de La Plata and lead author of the first communication on this specimen in the scientific journal Cretaceous Research, commented that “what has been found so far are the first 24 vertebrae of the tail, elements of the pelvic girdle, the pectoral girdle and more remains continue under the rock, so we will continue with their rescue in future field works”.

“Regarding size, very accurate estimates of body mass could not be made, because we do not yet have long bones such as the humerus or femur, which are the bones traditionally used to make these estimates,” said Otero, adding that in” some comparisons with Patagotitan mayorum –the largest dinosaur known so far–, for example with vertebrae and other elements of the girdles, it gives us that the bones of this new animal are between 10 and 20 percent larger than Patagotitan”.

“The truth is that, as you can see in the photos, the specimen is terrific, because it is practically articulated and we have more than half of the tail, many hip bones and, evidently, there are still more bones into the rock, so we are going to have a few more years of excavations,” Dr. José Luis Carballido, who led the studies on Patagotitan told the CTyS-UNLaM Agency. He was the first to spot the remains of this new gigantic specimen during a field trip in the middle section of the Neuquén river valley.

Researchers at the excavation site. Image via CTyS-UNLaM Agency

“We found it in 2012, but it was not until 2015 that we started the excavation work because we were also working on the extraction of other materials in other sites,” said Carballido, a researcher at the Museo “Egidio Feruglio” and CONICET, who has already named several species of sauropods – characteristic herbivorous animals and quadrupeds with long neck and tail – some of them gigantic and others “dwarfs”.

“It is a fairly large team of researchers and we have been working systematically at different sites in Neuquén. In one of these outings, while we were extracting a dinosaur, we went for a walk to relax around the surroundings and there we came across this giant dinosaur,” Garrido recalled. He added: “At that time, the planning stage for the extraction of this giant began, which is still ongoing. There is still a lot of work ahead”. 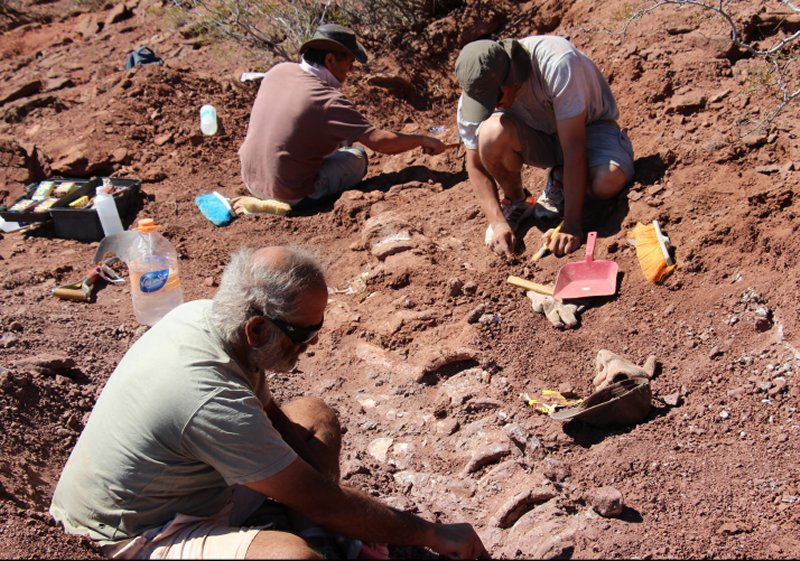 The largest dinosaur, known to date. It is not only extraordinary the size of this specimen found in the central region of Neuquén Province, but it is also surprising how articulate the fossil remains are. Image via CTyS-UNLaM Agency

Surely, this specimen will allow us to meet a new species, which will have its own name. Geologist Garrido commented that they prefer not to give many details about the place of the finding due to a question of preserving this specimen from predation, which, according to him, is very frequent. “So, we simply mention that it appeared in the middle section of the Neuquén river valley, which is the wide area in which we are working,” he said.

The director of the Zapala Museum specified that this dinosaur appeared in the Candeleros Formation, a rocky unit about 98 million years old, at the base of the Upper Cretaceous: “They are muddy deposits that are related to an ancient river floodplain. Currently, the site is very arid, but at that time large fluvial systems ran, rivers of great flow, in an environment of high temperatures, temperate-warm, with a marked seasonality”.

“These rivers had a very important permanent flow and provided a very favorable environment to be the habitat of these large reptiles,” Garrido considered. And he said: “In the excavations, were also found a few theropod teeth associated with carnivorous dinosaurs and remains of coprolites, which is fossil fecal matter, and we could see that these coprolites contain ground bones, which could lead to imagine that these scavengers ate part of this huge sauropod that died on the banks of an ancient Cretaceous river”.

At that time of the Cretaceous, in the Candeleros Formation, about 100 million years ago, there were at least three types of sauropods. The smallest identified so far is a rebaquisáurid –with a shorter neck, adapted to a diet at a very low altitude– and two titanosaurs: Andesaurus and the giant who is now making themselves known. Thus, between the three of them there was a partition of the ecological niche, feeding at different heights of the plant strata (see Gabriel Lio’s illustration in relation to their sizes).

The largest animal to ever walk on Earth?

The researcher Garrido commented that “on many occasions, these large dinosaurs appear in a very fragmentary form, with some isolated bones, so it is often not easy to compare them, because many times are not known the same bones among the different species”.

An exceptional case is the Patagotitan mayorum -whose finding in the province of Chubut was made known in 2014-, because of this species several specimens were found that, together, provide quite a lot of information wide enough to have enough details of what the animal was like.

Meanwhile, the new giant from Neuquén that could exceed Patagotitan in size has only one specimen, but the surprising thing is that it is appearing in an articulated way. “We suspect that it could be complete or almost complete. Everything will depend on how the excavations continue. But regardless of whether it is bigger or not, the appearance of an articulated dinosaur of these dimensions is something very novel,” Garrido said.