Eddie Gonzales Jr. – MessageToEagle.com –The Loch Ness Monster is “plausible”, a British university has declared, after finding that some plesiosaurs may have lived in freshwater.

“Nessie proponents have long believed that the creature of Scottish folklore could be a prehistoric reptile, with grainy images and eyewitness accounts over the years hinting that the beast has a long-neck and small head similar to a plesiosaur. 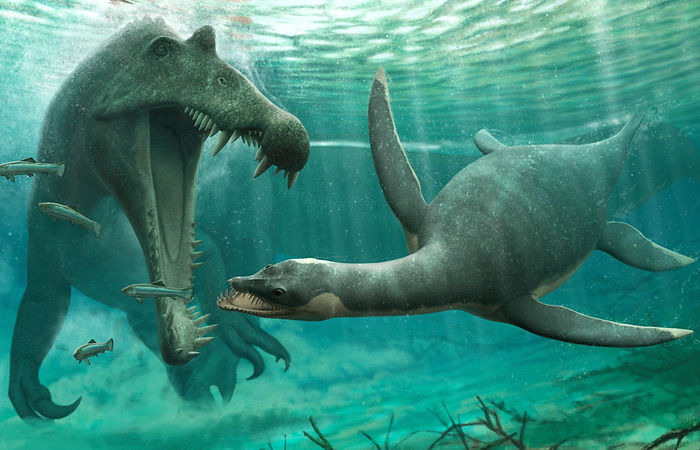 However, skeptics argue that even if a plesiosaur lineage had survived into the modern era, the creatures could not have lived in Loch Ness because they needed a saltwater environment.

Now, the University of Bath has found fossils of small plesiosaurs in a 100-million-year-old river system that is now in Morocco’s Sahara Desert, suggesting they did live in freshwater.

Fossils of small plesiosaurs, long-necked marine reptiles from the age of dinosaurs, have been found in a 100-million year old river system that is now Morocco’s Sahara Desert. This discovery suggests some species of plesiosaur, traditionally thought to be sea creatures, may have lived in freshwater.

Plesiosaurs, first found in 1823 by fossil hunter Mary Anning, were prehistoric reptiles with small heads, long necks, and four long flippers. They inspired reconstructions of the Loch Ness Monster, but unlike the monster of Loch Ness, plesiosaurs were marine animals – or were widely thought to be.

The fossils include bones and teeth from three-metre long adults and an arm bone from a 1.5 metre long baby. They hint that these creatures routinely lived and fed in freshwater, alongside frogs, crocodiles, turtles, fish, and the huge aquatic dinosaur Spinosaurus.

These fossils suggest the plesiosaurs were adapted to tolerate freshwater, possibly even spending their lives there, like today’s river dolphins.

The fossils include vertebrae from the neck, back, and tail, shed teeth, and an arm bone from a young juvenile.

“It’s scrappy stuff, but isolated bones actually tell us a lot about ancient ecosystems and animals in them. They’re so much more common than skeletons, they give you more information to work with” said Dr. Nick Longrich, corresponding author on the paper.

“The bones and teeth were found scattered and in different localities, not as a skeleton. So each bone and each tooth is a different animal. We have over a dozen animals in this collection.”

Whilst bones provide information on where animals died, the teeth are interesting because they were lost while the animal was alive – so they show where the animals lived.

The scientists say that implies the plesiosaurs were eating the same food- chipping their teeth on the armored fish that lived in the river. This hints they spent a lot of time in the river, rather than being occasional visitors.

While marine animals like whales and dolphins wander up rivers, either to feed or because they’re lost, the number of plesiosaur fossils in the river suggest that’s unlikely.

A more likely possibility is that the plesiosaurs were able to tolerate fresh and salt water, like some whales, such as the beluga whale.

It’s even possible that the plesiosaurs were permanent residents of the river, like modern river dolphins. The plesiosaurs’ small size would have let them hunt in shallow rivers, and the fossils show an incredibly rich fish fauna.

Dr Longrich said: “We don’t really know why the plesiosaurs are in freshwater.

“It’s a bit controversial, but who’s to say that because we paleontologists have always called them ‘marine reptiles’, they had to live in the sea? Lots of marine lineages invaded freshwater.”

Freshwater dolphins evolved at least four times – in the Ganges River, the Yangtze River, and twice in the Amazon. A species of freshwater seal inhabits Lake Baikal, in Siberia, so it’s possible plesiosaurs adapted to freshwater as well.

Plesiosaurs were a diverse and adaptable group, and were around for more than 100 million years. Based on what they’ve found in Africa – and what other scientists have found elsewhere – the authors suggest they might have repeatedly invaded freshwater to different degrees.

“We don’t really know, honestly. That’s how paleontology works. People ask, how can paleontologists know anything for certain about the lives of animals that went extinct millions of years ago? The reality is, we can’t always. All we can do is make educated guesses based on the information we have. We’ll find more fossils. Maybe they’ll confirm those guesses. Maybe not.”

“It’s been really interesting to see the direction this project has gone in,” said lead author Georgina Bunker. The study initially began as an undergraduate project involving a single bone, but over time, more plesiosaur fossils started turning up, slowly providing a clearer picture of the animal.

The new discovery also expands the diversity of Morocco’s Cretaceous. Said Dr. Samir Zouhri, “This is another sensational discovery that adds to the many discoveries we have made in the Kem Kem over the past fifteen years of work in this region of Morocco. Kem Kem was truly an incredible biodiversity hotspot in the Cretaceous.”

“What amazes me” said coauthor Dave Martill, “is that the ancient Moroccan river contained so many carnivores all living alongside each other. This was no place to go for a swim.”

But what does this all mean for the Loch Ness Monster? On one level, it’s plausible. Plesiosaurs weren’t confined to the seas, they did inhabit freshwater. But the fossil record also suggests that after almost a hundred and fifty million years, the last plesiosaurs finally died out at the same time as the dinosaurs, 66 million years ago.

For those interested in finding out more, Dr Longrich has also blogged about the discovery.